You are at:Home»Poker Runs» The Show After The Show 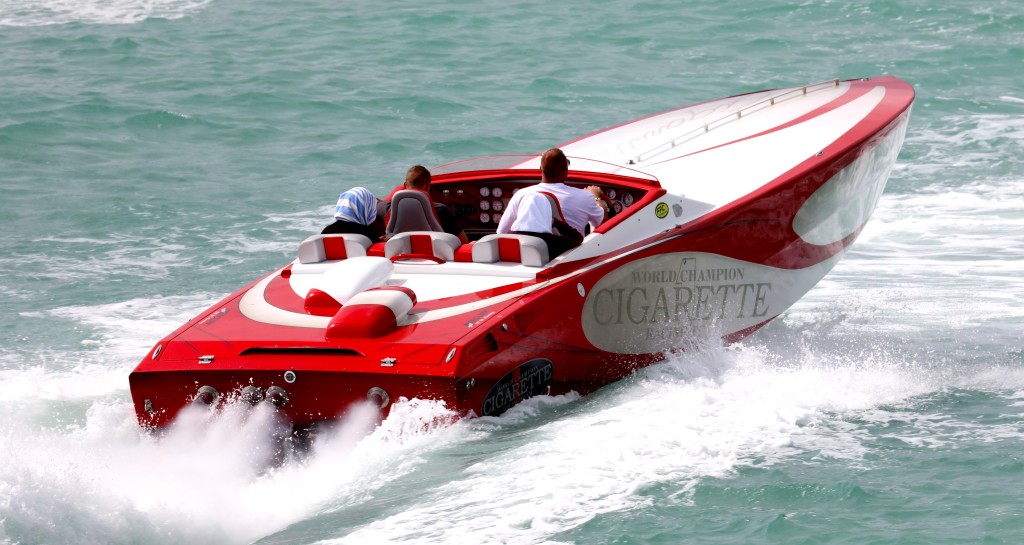 For members of the Florida Powerboat Club, the real fun begins after the Miami International Boat Show ends. Photo by Pete Boden.

Sometime this afternoon, Stu Jones and his staff from the Florida Powerboat Club will move into their exhibit at the Miami International Boat Show. And from Feb. 16 through 20, the FPC booth will be humming with activity, especially on Friday with club members stopping by to pick up their VIP credentials for the club’s Miami Boat Show Party that night at Monty’s On South Beach/Monty’s Marina.

But as it has for more than 20 years, the real work for Jones and his team starts after the show has closed. Come Thursday, Feb. 23, approximately 35 go-fast V-bottoms, catamarans and center consoles in the 50-boat Miami Boat Show Poker Run fleet will head from Biscayne Bay to the Faro Blanco Resort and Yacht Club in Marathon, Fla. (Another 15 or so boats will depart on Friday.)

This will be second the time in as many years that the club has chosen the Faro Blanco property as its final destination, but truth be told the move from the Post Card Inn (the former Holiday Isle resort) on Islamorada was a longtime coming. Dockage at the venue was in short supply with just 24 slips available for the event’s typical 70- to 80-boat fleet, and Jones heard more than a few complaints during the years from participants forced to raft-off four to six boats deep from the seawall.

At Faro Blanco, all the boats will be docked inside the harbor.

“We could have signed up more boats this year, but docking would have been at other facilities four to five miles away from the Faro Blanco venue,” said Jones. “The whole reason we moved from the Post Card Inn was it wasn’t a good docking situation for anyone. This is going to be much better for everyone. While a couple of boats might have to share slips, the slips are more than big enough—some are for yachts with 24-foot beams—and they’re all in protected water.

“My job is to take care of the people supporting the club,” he continued. “I honestly love that we have some really big events with a lot of boats like Key West and Emerald coast once or twice a year. But that said, we can’t keep overloading every facility we go to. In Faro Blanco this year, where we are with 50 registered boats will be very comfortable for everyone.”

In years past during the Miami Boat Show Poker Run, Jones held the club’s banquet on Friday night and participants played their poker hands—and Jones bestowed the FPC’s “People’s Choice” and sponsor awards—late Saturday afternoon. This year, everything will happen Friday.

“We’re pushing our program—catered dinner, poker hands, awards and all—right on through on Friday night,” said Jones. “People tend to go boating to Key West or raft-off somewhere on Saturday. Nobody wants to have to rush back for the poker hands. So we’re doing it all on Friday this year. We have an indoor space, plus I’ve rented the biggest tent we’ve ever had.

“We want to give everyone a good a good experience and make sure everyone has a wonderful time,” he added. “I’m confident that will happen again this year.”