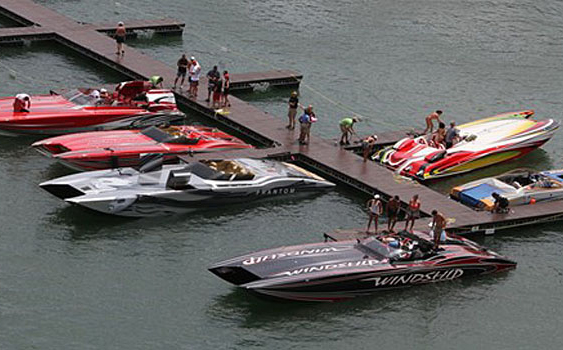 John Woodruff’s 48-foot MTI Windship (center) is expected to lead another impressive fleet of high-performance boats at the Pirates of Lanier Poker Run in Georgia this July. (Photo courtesy of Lanier Partners of North Georgia.)

Last week I had the pleasure of catching up, albeit it briefly, with Mr. John Woodruff at the Miami International Boat Show. Believe it or not, Woodruff, who turned 60 the day before, was carrying I’m guessing more than 50 pounds of promotional flyers in his backpack for the Pirates of Lanier Poker Run on Georgia’s Lake Lanier taking place July 18-20.

If you don’t know of Woodruff, he’s the Georgian native who owns Windship, the 48-foot Marine Technology Inc. catamaran, the first pleasure boat we tested at Powerboat magazine with twin Mercury Racing 1350s. The boat is a complete stunner, but that’s beyond my point here. The point is, I don’t usually see an “elite” poker runner such as Woodruff breaking a sweat passing out literature at a boat show. If they’re not in a meeting or running their business, they’re usually on their boat or waterside with a drink in hand.

But Woodruff is different—philanthropy is a way of life for him. For more than 20 years, he donated his time and money to the March of Dimes and even served on the organization’s board of trustees for the Georgia chapter. And before he got into boating, he helped organize a motorcycle ride that raised $8 million throughout the years. 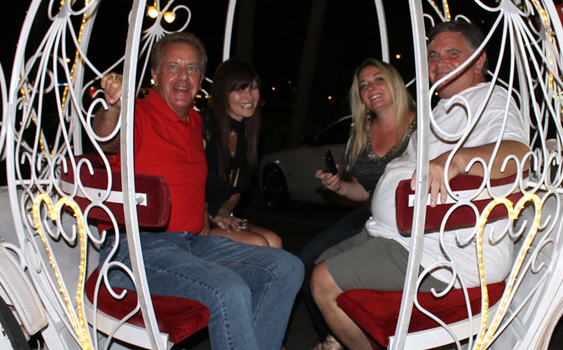 Over the past several years, Woodruff has become more active in the powerboat community through several friends, including fellow MTI owner Jimmy Jackson. Woodruff’s always been a boater—in fact, he owned a turbine-powered 29-foot Sanger built by Howard Arneson of Arneson Marine fame—but he said Jackson and others educated him on the poker run community, which opened up a whole new world.

Now it seems like he won’t stop until the most charitable poker run in the world is in his own backyard. In just three years, Woodruff has helped the Lanier Partners of North Georgia (LPNG) grow its smaller, local poker run into a nationally recognized event. He said he got involved because he respected the nonprofit organization’s effort to give back to the community and thought he could share a little poker run insight.

“John responded to an email blast for our run in 2011,” said Rae Williams, one of the founders of the LPNG.  “He said he wanted to get involved because we were doing something great for the community, so I met with him and he had some fresh ideas. He also was involved with some big charities in the past so he brought great insight to the table. The next thing you know we’re getting bigger and bigger. John definitely brought attention to our event in areas we couldn’t reach.” 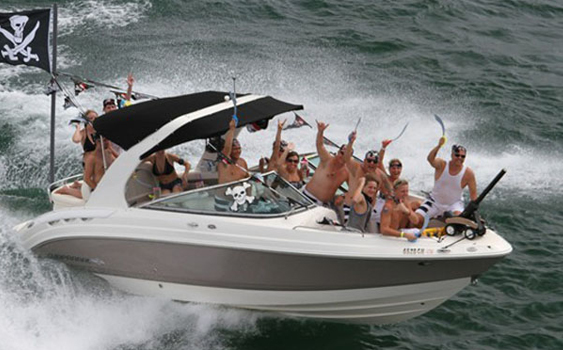 From Bajas and Chaparrals (pictured) to pontoons, the Pirates of Lanier Poker Run attracts boats of all shapes and sizes. (Photos courtesy of Lanier Partners of North Georgia.)

With Woodruff on the board of directors, the poker run, which benefits children’s charities throughout North Georgia, increased its donation amount from $5,000 to $30,000 in 2011. Last year, with even more involvement from Woodruff and his friend Dan Jape, who sits on the LPNG board and owns the event’s presenting sponsor Reliable Heating and Air in Atlanta, the event donated more than $100,000. Now, in the event’s fifth year, Woodruff isn’t afraid to say their goal is to triple that number and donate $300,000.

“When John puts his mind behind something, he’s fully committed,” said Jape, who owns an Eliminator Boats 36 Daytona Speedster. “He’s instrumental in doing a lot of the behind-the-scenes stuff with the event. Our goal is to make it one of the best and safest poker runs and give away more money than anywhere else. What I like best about the poker run is that it’s a chance for us to host all of our friends from across the country on our lake, but in the end, what we do is so critical for our community. Everything we raise goes toward the local children.”

Ask Woodruff why he cares so much and he responds quickly.

“This money is for kids who cannot get this money any other way—it will make a giant difference,” he said, pointing toward the three recipients for 2013, the children at Children’s Healthcare of Atlanta, the children of Naval Special Warfare Kids and the children at Camp Sunshine. “An organization like Camp Sunshine brings kids diagnosed with cancer and their families together in one place to give them hope and show them that they’re not alone in their struggle. Not only does it allow the families to interact and create a support network, it puts a smile on everyone’s face.”

To raise even more money, Woodruff and his associates plan to blow last year’s event out of the water. Woodruff said they’re moving everything to Sunset Cove at Lake Lanier Islands Resort and adding a rain-or-shine vendor display area. Both Friday’s mandatory captain’s party and Saturday’s awards party, which includes a fireworks and laser show, will be held on site. Like last year, there will be two starts—one for sportboats, runabouts, pontoons and the like, and another for high-performance boats. That way boats that can’t turn it up in the triple digits, which was a good amount of the 100-plus boats in attendance last year, can get around to the stops first.

With $8,500 in poker hand prize money and trophies for best dressed crew, best decorated boat, most patriotic boat and worst decorated boat, Williams promises a great time for every participant. “Bar none, the people who came last year enjoyed themselves and will be coming back,” he said. “We’re all about having fun, and be warned, you better wear your pirate garb.”