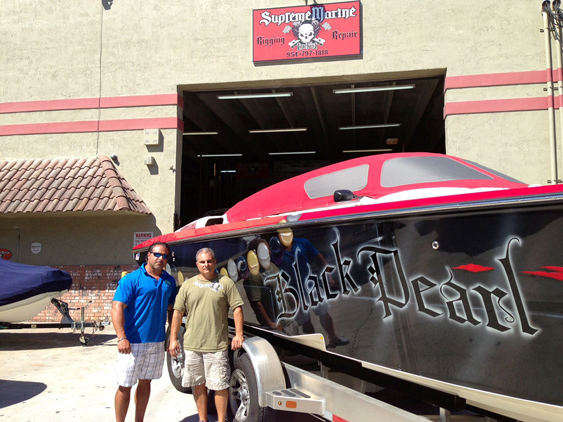 Dave DeLezenne (left) and Troy Hannon of Supreme Marine stand next to Black Pearl, a 38-foot Fountain Powerboats V-bottom that is used for both pleasure boating and racing.

Before the Lake of the Ozarks Shootout, I’d never met Dave DeLezenne. Now that I’ve had the chance to get to know the guy behind Unique Custom Marine Ultra One Batteries, I’ve been trying to figure out how we’ve never crossed paths before. DeLezenne has worked alongside some of the brightest in the business crafting his knowledge of performance boats from service and setup to driving and rigging since his early days in Michigan to his most recent ventures in South Florida.

Today DeLezenne, who has worked for RPM Racing, Cigarette Racing, Fastboats.com, Suncoast Powerboats at Doller Offshore Marine and more, is focused on his new undertaking, a combination of concierge, service, rigging and more to complement a battery distribution business with plenty of upside. As the official distributor of NorthStar’s ultra high-performance Absorbent Glass Mat (AGM) line of batteries, DeLezenne believes he’s found and can deliver the best batteries for performance boaters.

To prove it, DeLezenne took his batteries to the STIHL Offshore Racing team owned by Robert “JR” Noble, who drives the 38-foot Skater Powerboats catamaran alongside throttleman Grant Bruggemann. The guys decided to give the batteries a try—the AGM 24M series to be exact—and they’ve been pleased with the results and durability, according to DeLezenne. And why shouldn’t they be? They recently won the Super Boat International (SBI) National Championship in the Superboat class in Clearwater, Fla., and are hoping to back that up with another SBI world championship in Key West next month. 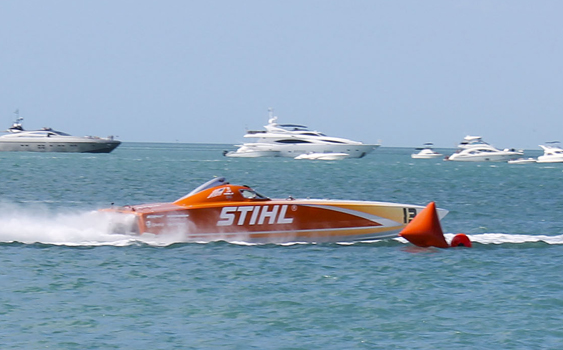 “I knew I needed to have a raceboat run the batteries to prove how well they work,” said DeLezenne, who lived on a boat as a kid in Michigan and now calls Coral Springs, Fla., home. “Everything about these batteries is perfect for performance boats—they can handle the abuse, they’re low maintenance and they offer superior cold-cranking amps. By putting them in a raceboat I knew they would endure the harshest environment possible. And there’s a reason I turned to the STIHL team, they’re world champions and everything they do is professional.” 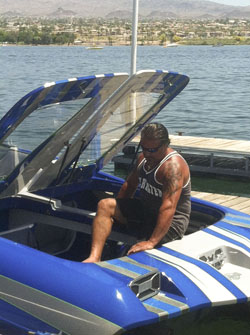 From catamaran to V-bottoms, DeLezenne is no stranger to the engine compartment of a performance boat.

Obviously DeLezenne will have his eyes on the STIHL Skater during the world championships (Nov. 3-10), but he’ll also be quite busy in the Florida Powerboat Club poker run village at the Conch Republic manning his booth to promote the batteries to pleasure boaters. Not only will DeLezenne be on hand to provide information on the advance AGM batteries that offer fast recharge, unrivaled cycling and minimal maintenance, a tech representative from NorthStar will be joining him.

Although DeLezenne is enthusiastic about the customer service and concierge side of things, he realizes that it’s a challenging business. That’s why he was excited to lock in the battery distributorship earlier this summer. Everyone needs batteries—and he knows it from years of experience in all kinds of boats.

“I recently started using Dave’s batteries and they seem pretty powerful compared to what’s out there,” said Troy Hannon of Supreme Marine Inc. in Fort Lauderdale, Fla. “They seem to crank pretty fast and the specs on them are impressive. I don’t think the abuse from being in a boat is going to hurt them either. I’ve done five or six boats with them so far and everybody has been tickled pink with the performance.

“In my opinion batteries are the most important thing on the boat—nobody wants to be dead on the water,” Hannon continued. “Dave’s batteries cost more than some other options out there, but if the batteries do what they’re supposed to, they’ll be well worth it. Give me a year or two and I’ll have a better idea of how they actually perform. But so far so good.”

Along with promoting the NorthStar batteries and assisting any clients who opt to do the poker run, DeLezenne also will be captaining a 62-foot Azimut down to the Keys for the festivities.

“It’s going to be a busy week in Key West, but I can’t wait,” said DeLezenne, who has his 100-ton captain license and works on luxury boats as well. “I’m looking forward to seeing everybody and showcasing a product that I believe is the best on the market. I feel blessed right now.”