You are at:Home»Projects»Coming Soon: Apache 41 Scalp Hunter Plus Waves And Wheels Skater 46

As I tend to do at least once a month, earlier this week I checked in with Justin Wagner of Waves and Wheels in Osage Beach, Mo. He was nowhere near his marina located at mile marker 26 on Lake of the Ozarks, but the timing couldn’t have been better as he was sitting with his good friend and a longtime project partner, Andy Imhof, who owns Maryland Offshore Performance Marine Center in Rockville, Md. The two were at Imhof’s shop hashing out ideas and timelines for upcoming projects on an almost 15-year-old 42-foot Outerlimits Offshore Powerboats V-bottom and the 1987 41-foot Apache Powerboats wave-crusher Scalp Hunter, a restoration Wagner and Imhof are beyond excited about—the same boat I wrote about in my column nearly a year ago to the day (read the story). 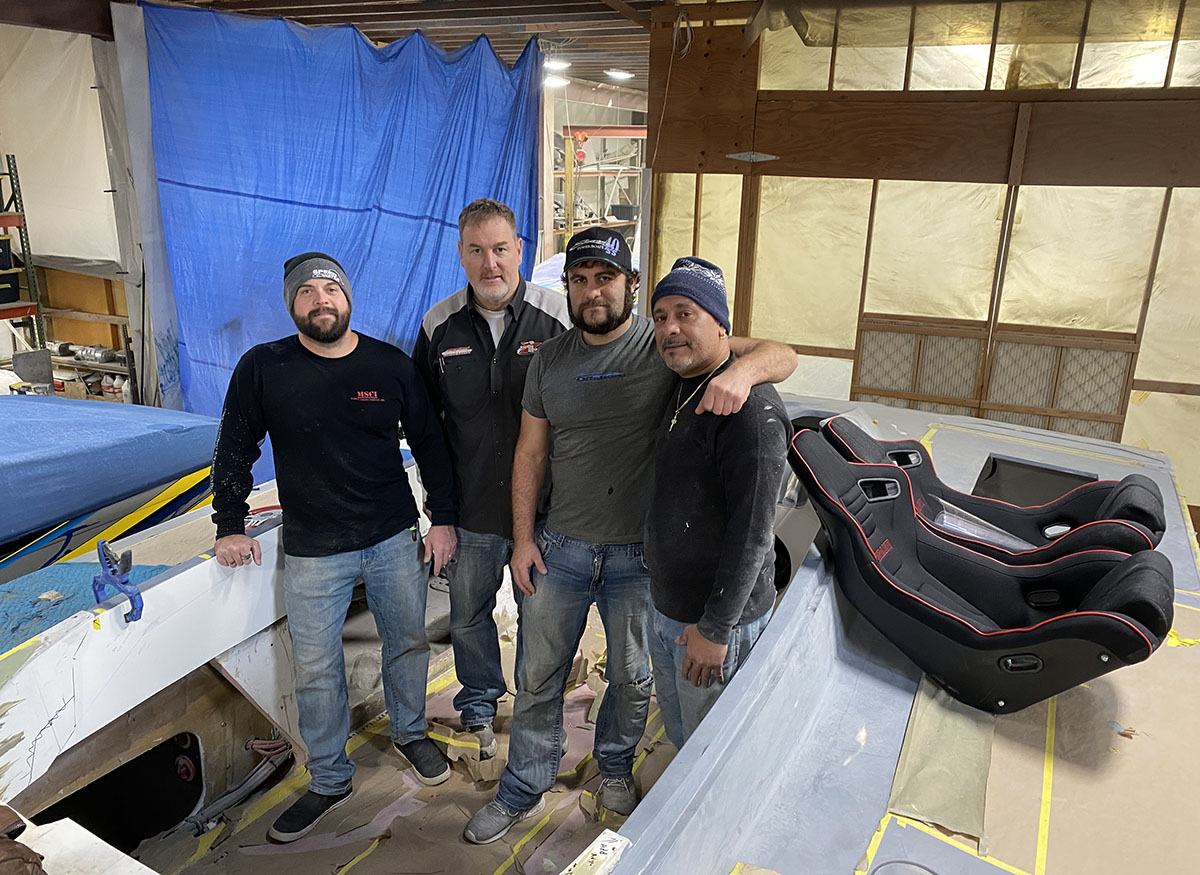 The two of them—and the talented crew behind each of their companies—have started making serious progress on Scalp Hunter, which is owned by Missouri performance boater Todd Crossley, and I’m planning to release some more details and renderings of the project, which Imhof said “has a modern look that does justice to the Apache legends of the past,” and the Ford Excursion (see below) that Waves and Wheels has redone to haul the 41-footer next week on speedonthewater.com.

But the main reason Wagner and Waves and Wheels’ Idel Binet were visiting Imhof and his team was to check a few things off the list on Wagner’s personal project, the 46-foot Skater Powerboats catamaran that was built in 1997 and raced at one time by the legendary Reggie Fountain as the Fountain-Mercury 76 boat. That boat, which Wagner was originally going to do as the Transformers-themed Optimus Prime, is in the process of getting an entirely new look and a truly original theme. I’ve been sworn to secrecy for the time being, but the progress is such that Wagner plans to have speedonthewater.com unveil the design and more details on the boat on New Year’s Day. 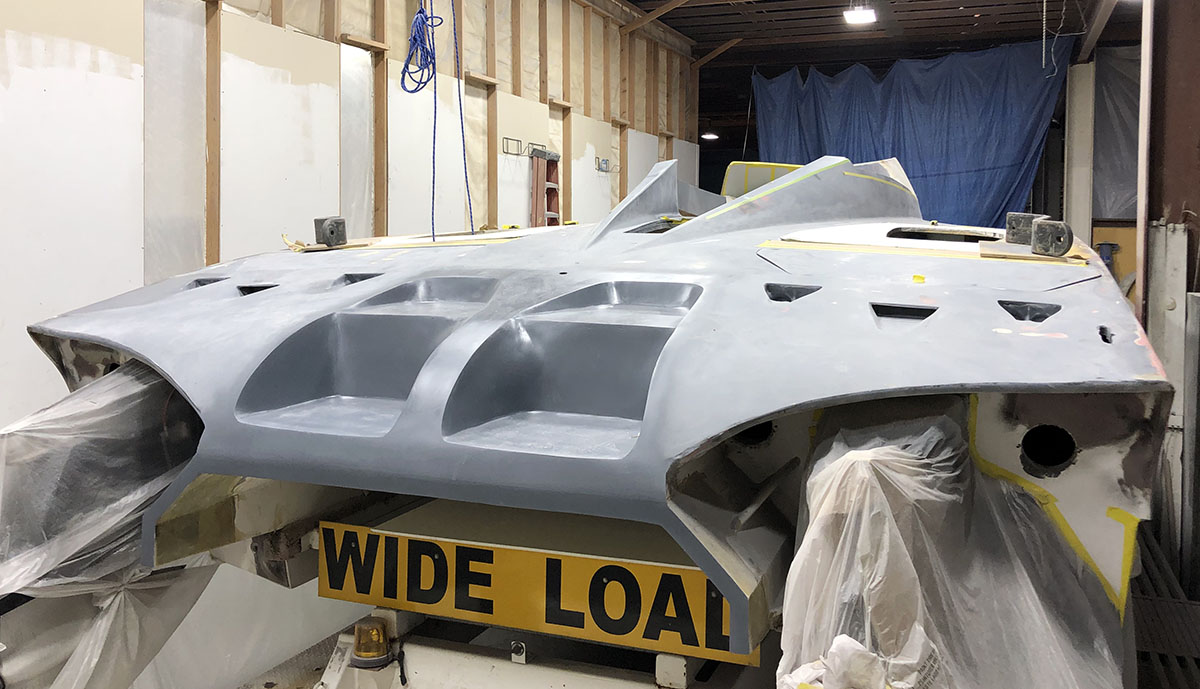 The crew at Maryland Offshore Performance Marine Center has logged more than 16 weeks of bodywork time on the 46-foot Skater.

In the meantime, Wagner shared a couple of images of the boat, which he said Imhof calls the aircraft carrier because it is so big. He’s not kidding either. The true 46-foot cat is 13 feet wide and as tall as any boat I’ve seen in person.

In discussing the project, I told Wagner that in a meeting last week with two people who were very familiar with the boat, Reggie Fountain and Jeff Harris of Fountain Powerboats, I brought it up and they both had fond memories of the Skater. Wagner started to ask a couple of questions so I stopped him and said, “How about I just connect you with Jeff? He seemed to know a lot about the boat.” 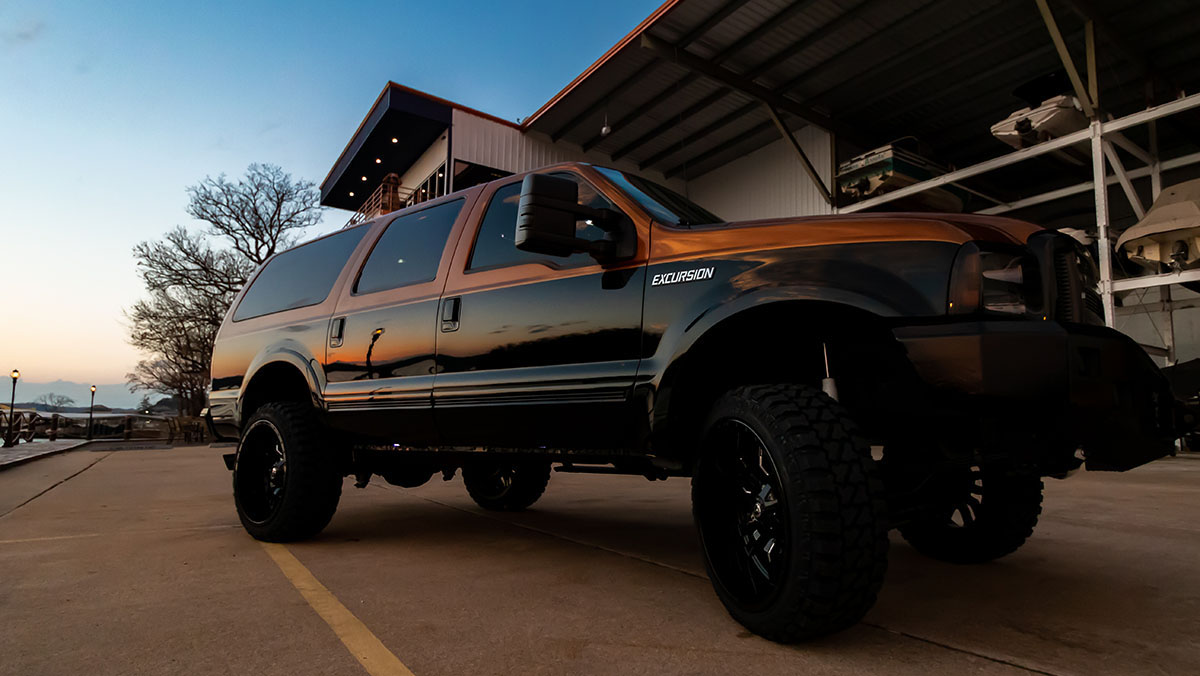 Waves and Wheels converted this Ford Excursion, which was painted by its sister company, Graphix 1 Paint, into a rig worthy of hauling the Apache Powerboats V-bottom that it is in the middle of restoring.

So after putting together a game plan for the upcoming project rendering releases, I went ahead and group-texted Harris and Wagner. I won’t go into detail about the conversation that stretched out over the next couple of hours about the boat’s history—that is a full story for another day, maybe even a day when Harris and Wagner take the Skater out on the water together—but I can say that even Harris was excited about the boat’s new look. He also wished Wagner luck taking the late-90s raceboat and turning it into a state-of-the-art pleasure boat with help from his friends at Maryland Offshore Performance Marine Center.

While both Wagner and Imhof are pretty busy, they both said that they have a couple of slots available for winter projects, so if you’re interested, give them a call for a quote or to ask them any questions.