You are at:Home»Racing»A Fresh Start for the Parker Enduro 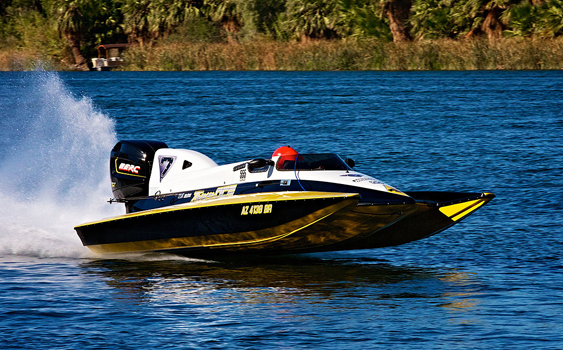 With much speculation surrounding the running of the legendary Parker Enduro this year due to a change in organization, the 300-plus-mile race went off without a hitch last weekend (Oct. 25-26). Dubbed the BlueWater 336 Enduro, the classic race that dates back to the 1960s on the Parker Strip section of the Colorado River on the Arizona-California border featured a lot of “firsts” this year, including qualifying on Friday, a team/staff party on Friday evening and cash prizes handed out at Saturday night’s awards banquet.

For the first time there also was a bunch of radio and Internet marketing thanks to new promoter Dave Johnson of River Dave’s Place, who teamed with race director Scott Schatz on a successful first-year effort despite registering just 28 boats following the confusion with the organizational change.

The most notable “first” though was Tim McDonald taking home the overall victory in his first time competing in the race, which was being run on a new 12-mile course, a nod to the old course from the Parker Nine-Hour Enduro days. The owner of Oregon Custom Marine, McDonald said he decided earlier in the week that he was going to do the race after he bought a friend’s outboard-powered STV Mod VP on Tuesday and re-powered it with a legal 2-liter setup for the event’s Division 2 class.

You could call it beginner’s luck but that’s not necessarily true as McDonald has a good amount of racing experience between driving alongside throttleman Mike DeFrees in the Team CRC MTI catamaran or running deck to deck in the competitive P1 SuperStock USA series. Still, McDonald, who was joined by driver Mike Quindazzi after his boat broke in qualifying and the two hit it off at Friday night’s party, was surprised by the outcome. 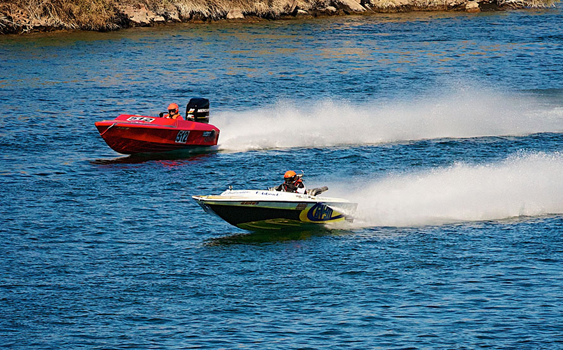 Two of the boats in the 28-boat field race down the Colorado River in Parker, Ariz. Photo by Tom Leigh.

“I thought I’d be pretty lucky to go out and podium and maybe win my class,” said McDonald, who was planning to “Ironman” the race but was glad he had Quindazzi to relieve him for the middle eight laps. “I can’t believe how much fun I had—it was a blast. I didn’t want to get out of the boat. That was such a fun course. I mean you had everything from tight pin turns to long straightaways to sweeping S-turns.”

With support from Lake Havasu Napa Auto Parts, McDonald finished the race, which was presented by Teague Custom Marine, in 4 hours and 37 minutes, about six minutes ahead of the second-place Nordic Boats team of Steve Davis, Todd Haig and Freddy Brennan that won the Division 4 class. The Division 5 winners, Fred Bowden, Chip Watkins and Greg Foster, finished third overall.

Although he was disappointed that his team had to drop out of the race because of a broken propeller with a little more than 100 miles left, John Teague was extremely optimistic about the event as a whole. 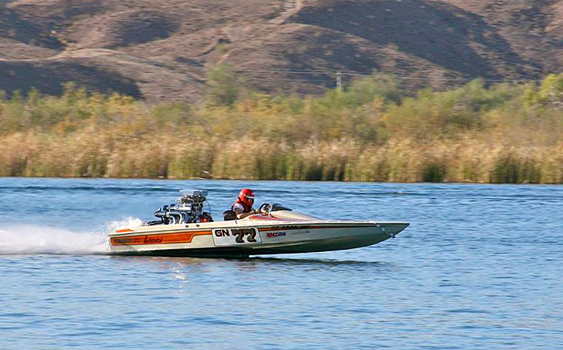 John Teague raced the Teague Custom Marine #77 Grand National boat on the river he practically grew up on. Photo by Maggie Rae Henninger.

“I loved the long course—it introduced some challenging new sections like a couple of high-speed sweeping right-handers, which is hard to do in a Grand National boat that likes turning left better,” commented Teague who said he had a blast running the Teague Custom Marine #77 Grand National boat with his father, Bob, who raced the Parker Enduro with the same boat in the’80s. A frequent competitor of the event in the ’70s and ’80s, Bob parked the Grand National in the early ’90s after his kids were born and didn’t enter the race again until John asked him if they could dust off the boat and run it in the 2009 Parker Enduro.

“For a first-year event or not, the race went extremely smooth,” added Teague, who had some power at his disposal with the carbureted Teague Custom Marine 1335 engine turned down to make about 1,200 hp as not to overpower the 20-foot boat that was built in 1982. “There were a few kinks that the new team will learn from, but overall the race was fantastic. I see this event as going nowhere but up. This long course with 40 or 50 boats would be a blast. I heard people saying the longer course would be more difficult to cover from a safety concern, but the organizers, patrol boats and APBA (American Power Boat Association) officials did a great job with everything.”

Teague continued, “I think the longer course seemed safer as it made passing a little easier. Plus it was cool because it was racing the way it used to be. There’s great tradition with this event, a lot of history. It’s such a unique, challenging race with a good variety of boats. The Enduro is always one of my favorite weekends of the year.”

Teague gave a lot of credit to Johnson, who coordinated coverage up and down the river from the BlueWater Resort and Casino to Pirate’s Den RV Resort and Marina, which hosted 250 people for Friday night’s Hawaiian-themed gathering.

Although he sounded a bit worn out, Johnson said he’s already looking forward to next year’s event, which will take place October 24 and 25. In fact, he’s already publicly offered a larger prize purse for the 2014 event. In addition to the 100-percent entry fee payback that was offered this year ($8,600 total), he’s guaranteeing an extra $10,000 will be added to next year’s pot.