You are at:Home»Racing»A Gold Cup Curse? 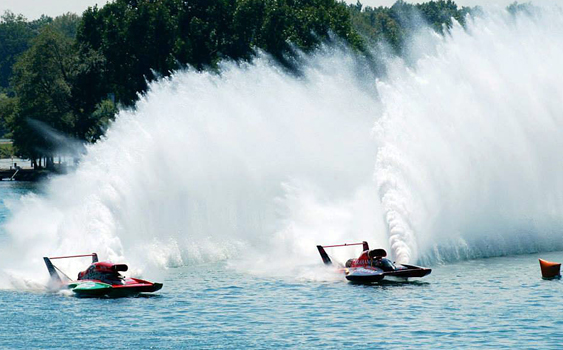 As the saying goes, “It couldn’t happen to a nicer guy.” Well that could not be further from the truth when it comes to Steve David, one of the nicest and most respected boat racers the sport has ever seen.

In 23 tries, the 59-year-old driver of the Oh Boy! Oberto/Miss Madison boat, which is owned by the city of Madison, Ind., has yet to finish atop the podium at the Detroit APBA Gold Cup. While it’s hard to believe that one of the best Unlimited hydroplane drivers of all time doesn’t have his name on the Gold Cup, which was first awarded in 1904, the results from last weekend’s 104th annual event didn’t make David’s drought in Detroit any easier to swallow.

Former APBA President Steve David has been one of the best ambassadors for boat racing over the last few decades. (Photo courtesy of H1 Unlimited.)

Currently under protest by his team, the Gold Cup—at least according to the faithful fan base known as the Oberto Nation—was stolen right out from under David. The team’s driver seemed poised to win his second H1 Unlimited race of the year, but David was called for a lane infraction in the final heat and assessed a one-lap penalty, which opened the door for Kip Brown in the No. 95 boat Spirit of Qatar to earn his first career H1 Unlimited victory.

David admits he was pretty disheartened by the ruling and the overall result, especially because it happened on the Detroit River where he was hoping to finally get his hands on the elusive Gold Cup. But being the class act that he is, David, who has finished second in Detroit seven times, took the high road in an interview on Monday.

“Disheartened is probably the thing that comes to mind most,” said David, who served as the APBA president from 1996 to 1998. “We lost the race because of the referees, but as is the case in any form of motorsports, the officials—the human element—are the weak link. I was happy to see Kip win especially because his uncle [Nate Brown] won the Cup in 2004 and his father in law [the late Terry Troxell]won the race in ’05. So to see that happen is really neat. He deserves it—Kip is a good kid and a friend.

“It’s also good for the country of Qatar,” he continued. “It gives them something to be proud of again. Despite having the team’s primary boat under repair this season, they were still able to field a boat and win the Cup.” 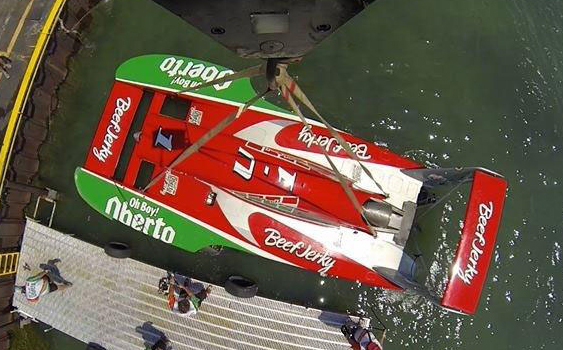 David knows what it’s like to lose to Spirit of Qatar, as Dave Villwock drove the No. 96 boat to the last three Gold Cup titles ahead of him. In fact, Villwock, who also drove Miss Budweiser and retired earlier this year, had won five straight and 10 in his career.

Surprisingly David isn’t too distraught over not finishing first in Detroit—last weekend or ever.

“Dave Villwock and I have had some great races there over the last seven years—I’ll definitely remember some of those,” David said. “I’ve had some bad breaks in Detroit, but that’s why it will be that much sweeter when I do win. It’s just a phenomenal place to race with such a cool course. It has the biggest turn on the circuit at Belle Isle and it has the tightest turn at the Detroit Yacht Club. The racing is always exciting in Detroit and the fans are great.” 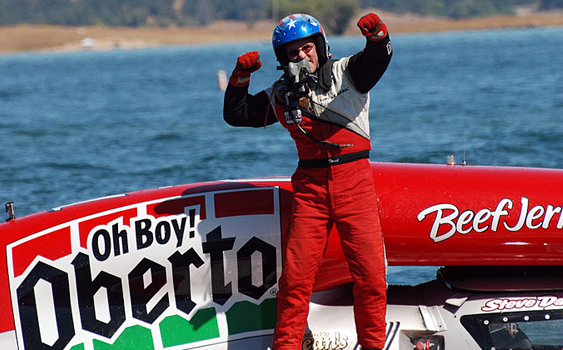 David was excited after his H1 Unlimited victory in Sacramento, California, in May. (Photo courtesy of Miss Madison Racing.)

David said that even if the team wins its appeal, the Gold Cup should still be awarded to Brown—he just wants the officials to admit the call was incorrect. For now, he’s focused on the next four races on the West Coast and holding on to his 183-point lead in the standings over Jimmy Shane, who drives the No. 5 Graham Trucking boat.

The next stop for the H1 Unlimited tour is the Lamb Weston Columbia Cup in the Tri Cities area of Washington (July 26-28), which is followed by the Albert Lee Appliance Cup at Seafair in Seattle (Aug. 2-4). The next stop is a new event—the Diamond Cup in Coeur d’Alene, Idaho (Aug. 30-Sept. 1)—and the final stop takes the teams south for San Diego Bayfair (Sept. 13-15).

If he can win in Seattle, David will tie the legendary Bill Muncey with four consecutive wins at Seafair—an impressive feat. Still, he’d probably trade any or all of those victories for one opportunity to hoist the Gold Cup over his head.