You are at:Home»Racing»All Oiled Up 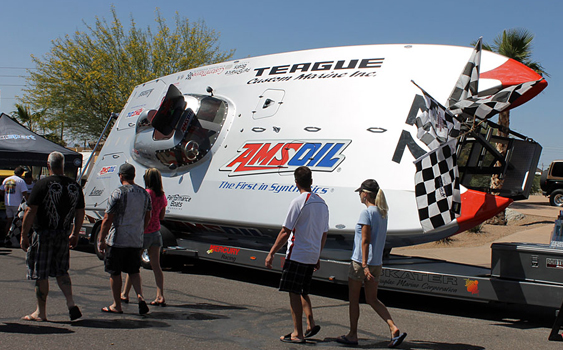 Whether the boat is barreling down the race course or on display at the Desert Storm Poker Run street party, the Team AMSOIL Skater turns heads. (Photo by Jason Johnson.)

A few weeks ago, I was at the Desert Storm Poker Run in Lake Havasu City, Ariz., enjoying the event’s incredible street party while manning the new speedonthewater.com promotional trailer with site co-publisher Matt Trulio. On display a couple of spots up McCulloch Boulevard was the recognizable Team AMSOIL offshore race boat owned by Bob Teague of Teague Custom Marine.

While I’m very familiar with the Douglas Marine-built 36-foot Skater Powerboats catamaran, which won a handful of national and world championships in the now-defunct Super Cat Lite class, the sight of the boat got me thinking about the long-standing relationship between Teague, who is both a colleague and a friend, and AMSOIL. Teague and driver Paul Whittier have been Team AMSOIL racers going on seven years, and the relationship—that’s the key word, since it’s more than a sponsorship—has proved to be a win-win for everyone. Trust me, I’ve seen it develop over the years.

“The key is to make promises and over deliver,” said Teague, who has been racing for nearly 40 years and counts AMSOIL as his longest-running sponsorship, outside of Teague Custom Marine, of course. “Our relationship basically started with a business relationship of buying product then evolved into a sponsorship. Along the way, we’ve also given AMSOIL an opportunity to develop new product for the marine industry.” 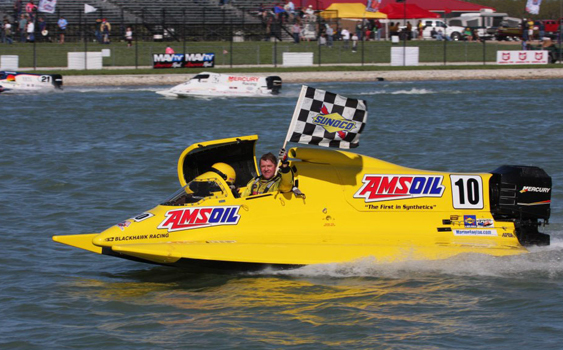 Not only has the Skater, which was powered by Mercury Racing HP525EFI engines before the team removed them last week, been a testing bed for AMSOIL’s DOMINATOR oils, but the team has put many diesel oils and additives to the test while hauling the boat all across the country.

Teague said the most important part of the relationship is honesty. For example, Teague had to be upfront with Jeremy Meyer, AMSOIL’s racing program manager, about the current racing season. As the Super Cat Lite class has essentially dissolved he explained to Meyer that the team needed to take a short hiatus, see how the new classes develop and then go from there.

When asked when the team will make a decision on what direction it’s headed, his one-word response was “soon.” He said it’s really about getting the best value for AMSOIL at this point.

“We had one heck of a run with Cat Lite, but that’s run its path,” Teague added. “The key is that it’s not just about results. Results are good, but this relationship is about loyalty and trust. It’s a two-way street, it really is. This isn’t all about money.”

Nobody knows that better than Terry Rinker, the hugely successful tunnel boat driver who has been racing for AMSOIL long before Teague. Since 1994, the AMSOIL/Rinker Racing team has dominated the national tour from the ChampBoat years when Rinker completed a perfect season winning all seven races in 2006 to just last week when he won the first race of the US Formula 1 Powerboat Tour. 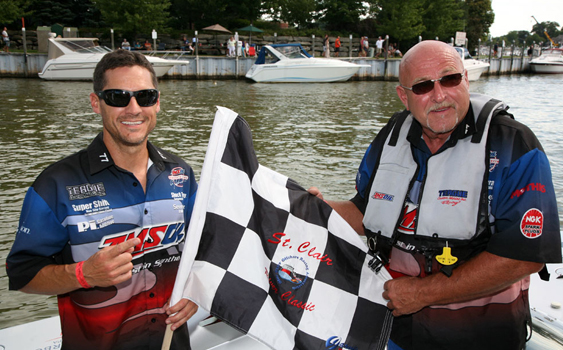 Driver Paul Whittier and throttleman Bob Teague have collected many checkered flags since they began racing for Team AMSOIL in 2007. (Photo by Paul Kemiel.)

The season opener on Lucas Lake at the new Lucas Oil Speedway in Wheatland, Mo., proved that Rinker isn’t ready to pass on the torch even though his two sons, Rob and Ashton, are beginning to rise up the ranks in the APR Superleague. It appears that the AMSOIL/Rinker Racing team could be going strong for many years to come.

It’s also obvious that when Teague and Rinker describe the AMSOIL team as a family, they aren’t exaggerating. Between the Rinkers—Terry’s brother, Randy, races as well—and the Teagues—Teague’s son, John, has driven the Skater in a few races and the two have teamed up to drive their Grand National boat at the Parker Enduro 300 the past few years—the family part is definitely covered.

But it’s more than that, Teague and Rinker are treated like family when it comes to their relationship with AMSOIL. Obviously it helps that both are completely professional, accessible and competitive. In fact, you’d be hard-pressed to find racers who do more for their sponsors. The championships and checkered flags are nice, but it’s about the effort they put forth, which, as Teague explained, is easy to do when your sponsor is putting in the same effort.