You are at:Home»Racing»Anatomy Of A Rollover 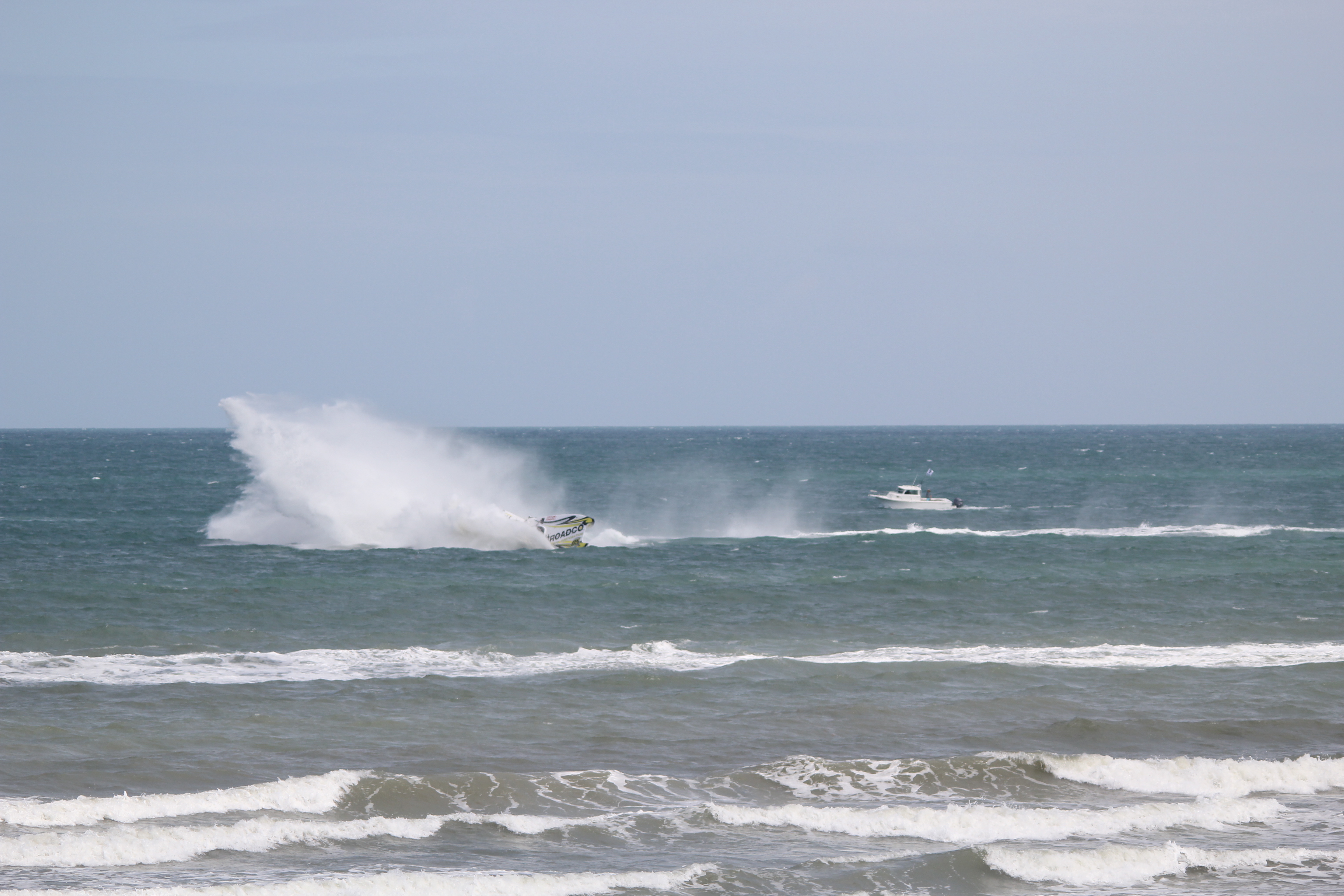 Said Broaddus: “During the roll, I counted daylight twice. Not only did we roll, we were spinning.”

For so many of the folks watching on scene and via the livestream online, Broadco’s tumble across the water last Sunday in Cocoa Beach, Fla., near the end of Super Boat International’ offshore racing season-opener seemed to happen in frighteningly slow motion. Driver/owner Chuck Broaddus and throttleman Grant Bruggemann had been pushing hard in their Superboat-class 40-foot Marine Technology, Inc., catamaran, and their work had been paying off. They caught and passed the WHM Motorsports Skater cat earlier in the lap and were headed for turn at the north end of the course. They appeared to be on their way to victory.

And then they didn’t. First, they were headed up—as in high up in the air—then down hard to the unruly white-capped water. Then the rolling began and, as Steinbeck wrote, “a moment settled and hovered for much more than a moment.” It was the first rollover—a triple no less—in a raceboat for Broaddus.

“When I see the video it looks way worse than what we actually experienced,” he said. “When we first started rolling, I was praying that we would stop right side up,” he said. “I was also praying that we were going to make it. We’re all right. We have our some bumps and bruises, but we couldn’t have hoped for a better outcome. All of the safety equipment worked the way it was supposed to. Kudos to MTI for all of the safety they built into the canopy. It did its job.

“I put up a hand to brace for impact, as we were taught in training,” added. “During the roll, I counted daylight twice. Not only did we roll, we were spinning.”

The 40-footer came to rest upside-down. Broaddus and Bruggemann had their regulators in their hands, but never put them in their mouths. Water entered the cockpit and the cat’s sponsons began their dreaded skyward point. For family, friends and fans of the driver and throttleman, a moment settled and hovered again until Broaddus, followed by Bruggemann, emerged from the escape hatch. As it did for his family, friends and fans, the sequence of events slowed for Broaddus—but in a positive, maybe even lifesaving way. His escape from the real thing happened just the way he had practiced it in the simulator.

“When I do the dunker test, I take my time,” Broaddus explained. “A lot of guys rush through it. They don’t even remember getting their regulators in their mouths or releasing their harnesses. I make a point of going upside down and then inserting my regulator. Sometimes I will sit upside down for 10 seconds before I release my harness. We kept our composure (during Sunday’s crash) and did the same thing. We’re both OK—neither of us were injured. That made our job of getting out of the boat much easier.

“We stayed calm,” he continued. “Probably the most frustrating thing was trying to get the boat righted and towed back in.”

Thanks to the Broadco crew and a number helpful volunteers including Mark Smalls of the Cleveland Construction Superboat-class team and John “Big Tuna” Mutton who actually towed the substantially damaged cat back to wet pits. The boat currently is back at the Broadco team shop in Bradenton, Fla. From there, its engines will be “pickled” and sent back to Ilmor Marine in Plymouth, Mich., where the Ilmor crew will determine what can be salvaged. Substantially damaged on one side, the boat will be sent to MTI’s home base in Wentzville, Mo., where MTI principal Randy Scism can determine what needs to be done.

“In my opinion, its repairable,” said Broaddus. “The question is: If we move it along, can we make that happen in time for Marathon [the next SBI race].

To that end, Broaddus is remaining calm and patient, just as he did during last Sunday’s horrific wreck in Cocoa Beach. He wants the boat to ready for the next race, but he’s not going to rush it.

“That will be up to MTI, of course,” he said. “This is my first go at a repair job of this scale.”

For a wrap-up of Sunday’s offshore racing action from Cocoa Beach, click here.