You are at:Home»Racing»Another Victory For Miss GEICO

Based in Dubai, the Victory Team builds one hell of an offshore raceboat. But don’t take my word for it—just ask the members of the Miss GEICO, 222 Offshore or the Zaborowski Offshore Racing teams, as they all run 41-foot Victory cats. Or take the question straight to the Victory Team, which runs its own 41-footers and has won more Union Internationale Motonautique Class One world titles than any other team in the history of the now-defunct circuit.

No one knows this better than Miss GEICO crew chief and team manager Gary Stray, who also worked as the Victory Team’s crew chief in the mid-to-late 1990s. That’s why he almost immediately began figuring out how to replace the team’s 41-footer after a late-contest wreck during the final race of Sunday’s Sarasota Powerboat Grand Prix left it needing structural repairs that will take the better part of this month. 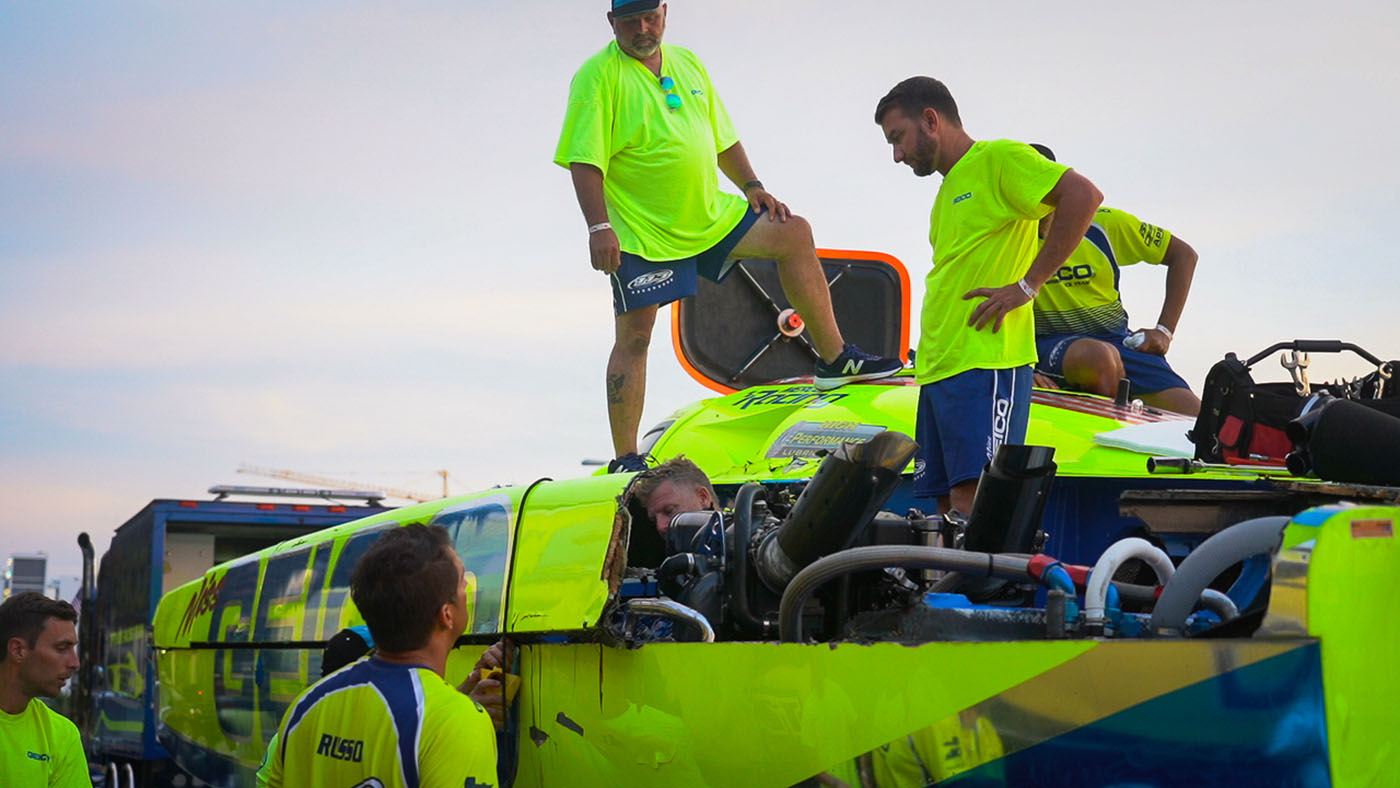 Led by crew chief Gary Stray, the entire Miss GEICO team—plus a few of its fellow Class One competitors—worked through the night to remove the Mercury Racing 1100 Comp engine from their damaged raceboat. Photo by Cole McGowan Miss GEICO offshore racing.

Stray and company were up to the wee hours of Monday morning removing and “pickling” the twin Mercury Racing 1100 Comp engines from the badly damaged boat. A few hours of troubled sleep was all it took him to come up with a possible solution.

“I called Jan Zaborowski Monday morning and said, ‘Jan, I have a proposal I want to run by you. Let’s turn your red boat into a yellow boat,'” he said. “‘Let us lease it for our next three events.’ We have known each other for like 30 years and he said, ‘Gary, consider it your boat.’”

The Miss GEICO and Zaborowski Offshore Racing teams struck a mutually beneficial deal, and by the end of this week Zaborowski’s 41-footer, originally based out of Norway, the owner’s home country, will be wrapped in Miss GEICO colors. Currently immersed in diesel fuel, Miss GEICO’s twin 1,100-hp engines will be sent to Mercury Racing today for inspection and whatever repairs/rebuilds they need. But they won’t be ready in time for the team’s next three events, meaning the American Power Boat Association Offshore Championship Series races in St. Clair, Mich., and Michigan City, Ind., as well as the Atlantic City Air Show in New Jersey. For those events, the team will install its backup Mercury Racing 1100 mills, as well as bring in a new one from the Fond du Lac, Wis., company. 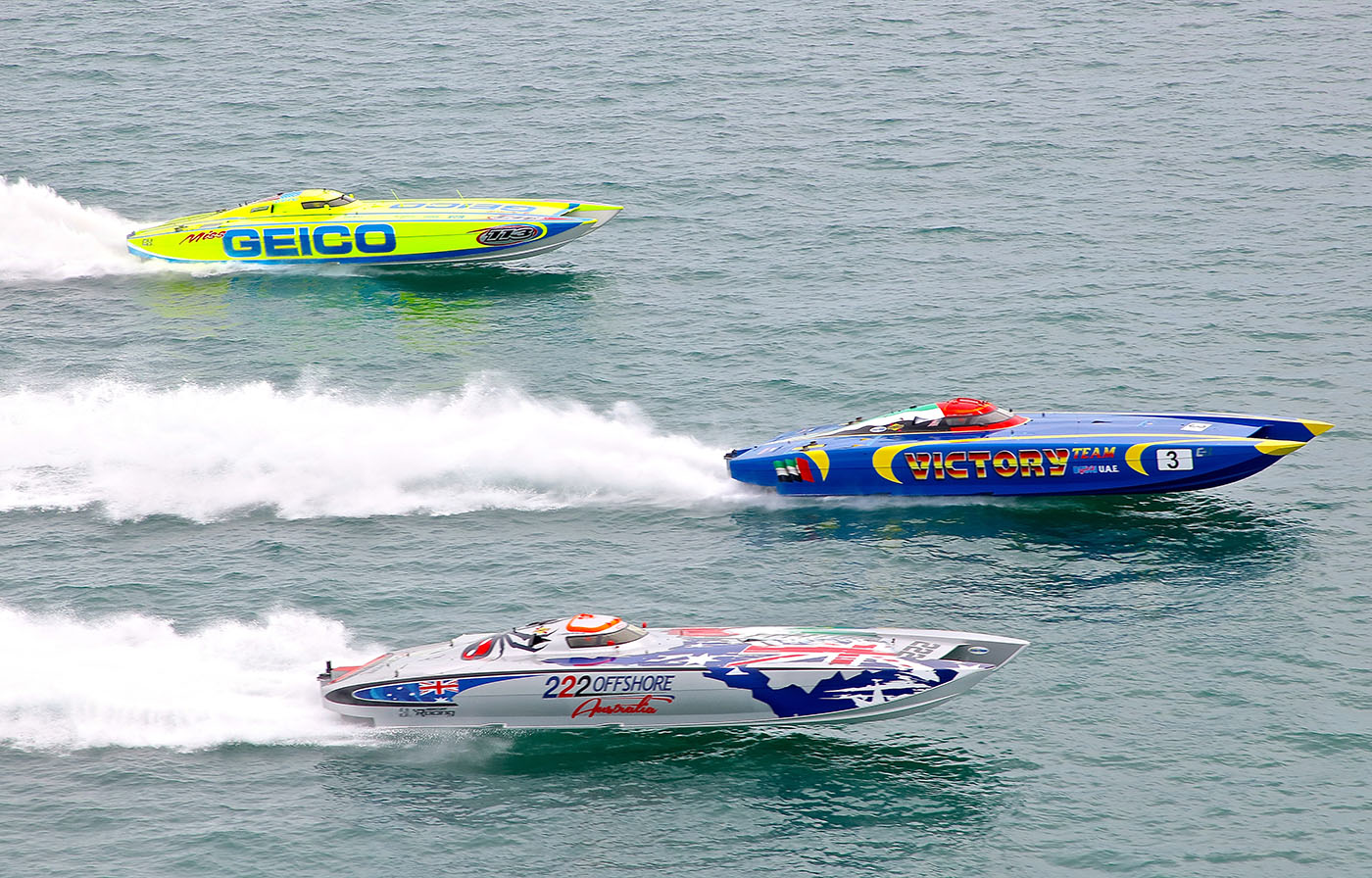 Once their original 41-footer is repaired, the Miss GEICO crew will reinstall its engines. Stray said he believes the boat will ready in time for the APBA series finale October 10-12 in Fort Myers Beach, Fla., as well as the Offshore Powerboat Association World Championships November 21-24 in Englewood Beach, Fla.

Beyond being able to secure a new boat for the Miss GEICO team in less than 24 hours, Stray said the most rewarding take-away from the last two days is the growing bond among the Class One teams in the APBA series. 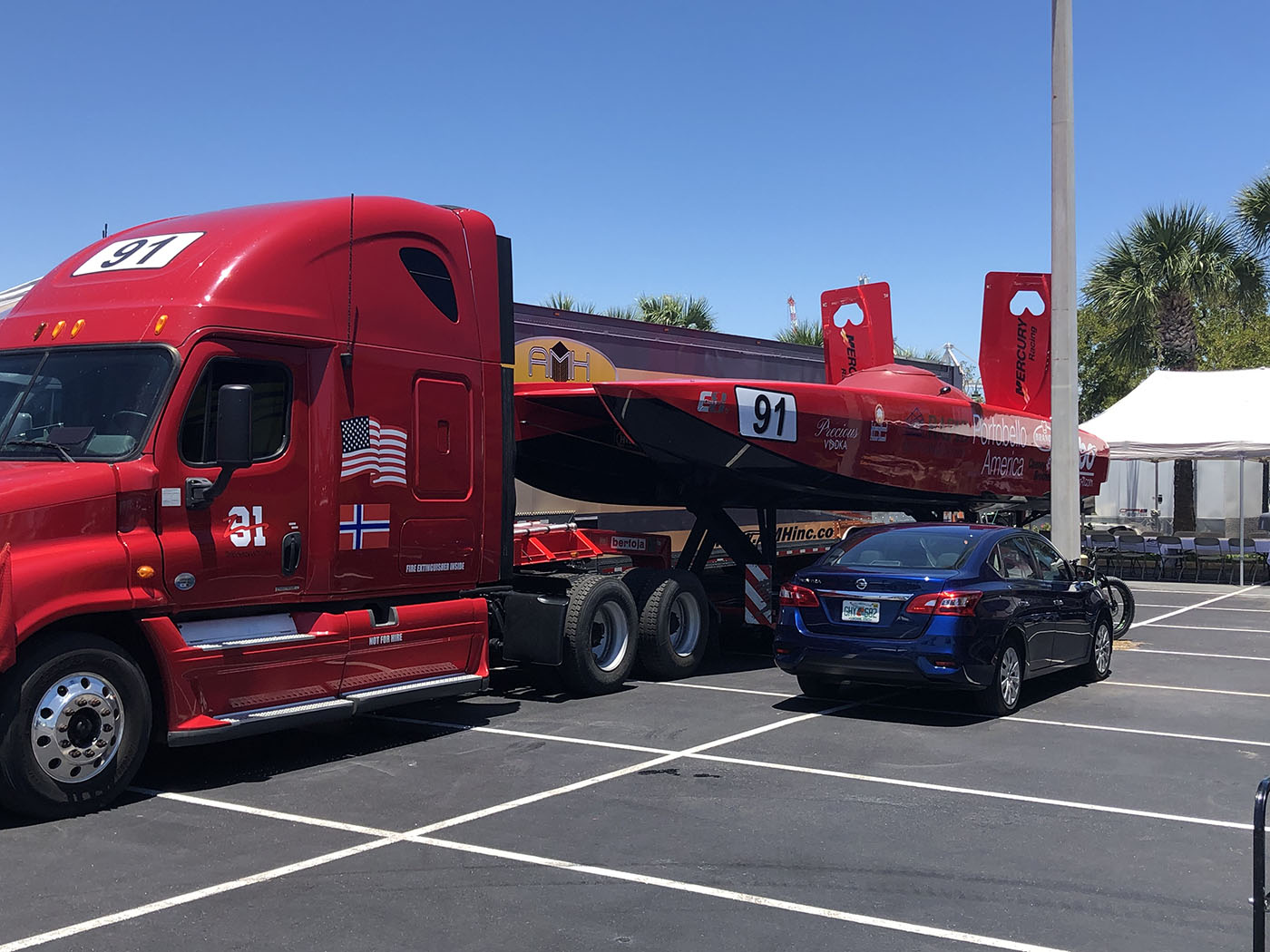 Captured here during the 2019 APBA Offshore Championship season-opener in Cocoa Beach, Fla., the Zaborowski Offshore Racing team Victory-built catamaran will be dressed in Miss GEICO colors for the team’s next three events. Photo by Matt Trulio/Speedonthewater.com.

“When we were racing (U.I.M. Class One) in Europe and there were like 30 teams, there was a sense of camaraderie I have not felt since,” he said. “Part of my goal with teams in the Class One group we have now was to bring that back, and I believe we’re getting there. On Sunday when we got the boat back to the pits, the Australian team (222 Offshore) was there waiting for us. They pulled and flushed our drives while we were pulling our engines. The Victory Team was the same way. They are very far from home and they were like, ‘Gary, what can we do to help?’ Together we have created this great, family atmosphere in this class.

“And the racing in Sarasota was great,” he added. “It was a crappy end, of course, with two boats upside down. But until then, it was neck and neck.”