You are at:Home»Racing»Behind The Scenes Of SBI’s Rocking Key West Livestream Broadcasts 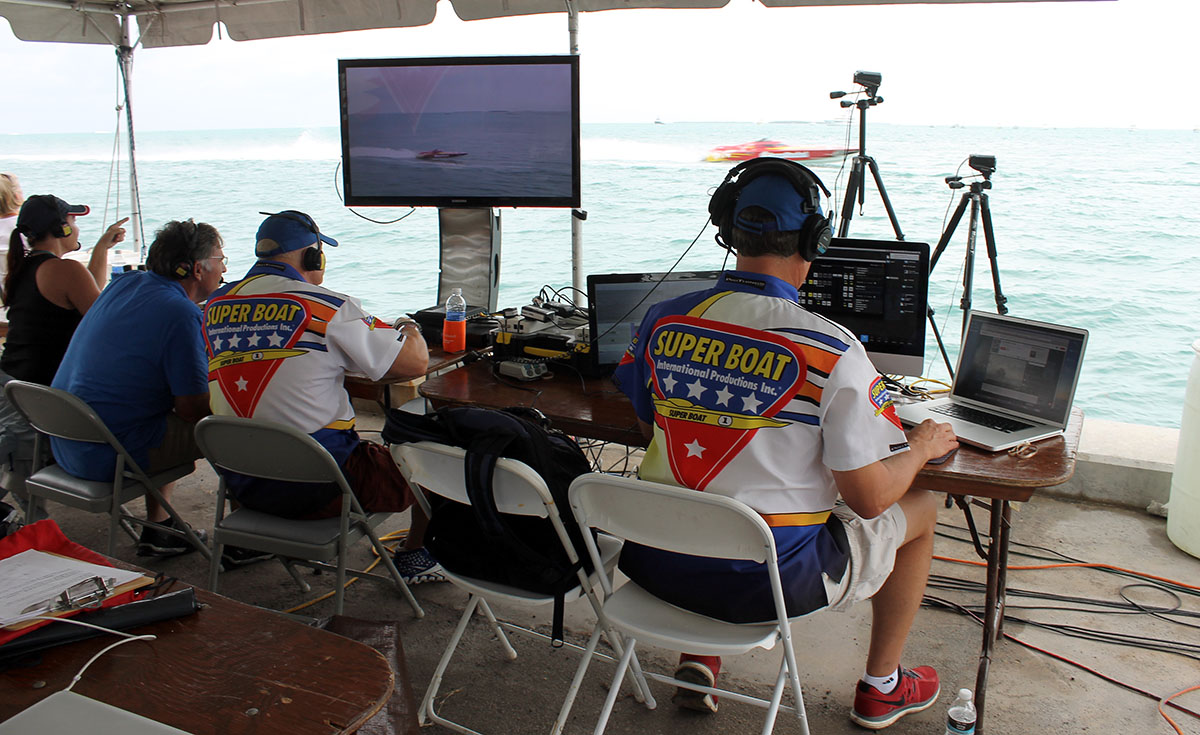 Picture a sports network television production booth, at least the kind you’ve seen in movies, during a live broadcast. First, it’s dark. The only light comes from a multitude of screens, each in its own tidy black console and fed by its own camera covering every conceivable angle of the game. Headset-wearing engineers and technicians attend to every screen and soundboard. And behind it all, calling out camera numbers and angles through a headset of his own, a director pulls it together into a real-time visual narrative.

Lose the booth and the darkness.

There is no booth and there’s plenty of sunlight. There are only three rectangular tables with folding chairs under a pop-up canopy on a breakwater called the “Outer Mole” just a few feet from the water. The center table is cluttered with audio electronics. The jungle of wires running between the middle and front tables is impressive and a little scary, as is the snake pit of power cords that run in every direction on the ground.

The front table is reserved for the on-air talent, meaning broadcasters Stan Lane and Tommy Sanders with an elevated flat screen monitor ahead of them, and an occasionally frantic guy named Rodrick Cox. As the director and producer of the show, Cox has three screens in front of him. The screens display the video feeds from five different cameras on the course, and it’s Cox’s job to choose and assemble the best angles—the ones that most effectively tell the story at any given moment—as each race progresses. 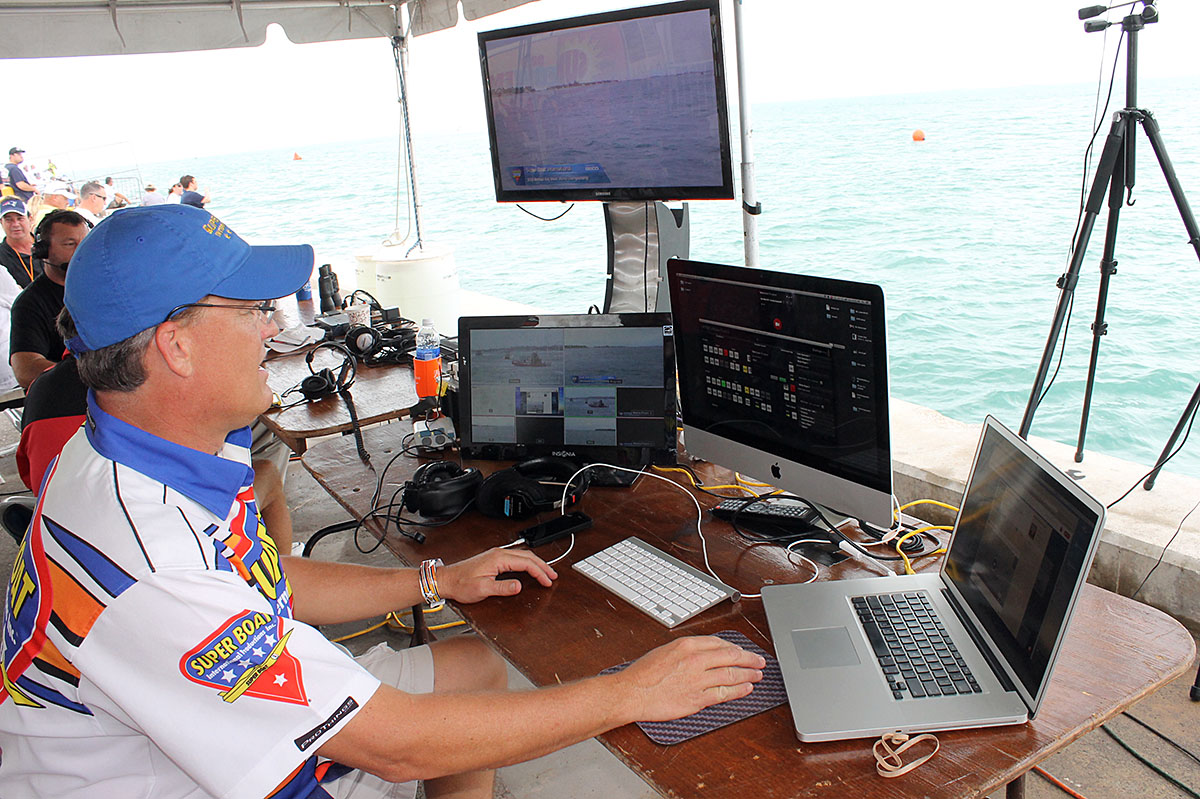 Director/producer Rodrick Cox: “The race teams can’t wait to have their families and friends watch it. They have viewing parties back home.”

“I set up all the camera feeds coming into our system—monitor all the camera angles and the graphics,” said Cox. “We try to go live 15 to 20 minutes before each race so our fans can see the boats craned into the water. I communicate with the cameramen so we’re ready for and make sure we’re getting certain shots, switch from camera to camera as the race goes live, make sure all the audio and graphics go into the feed.”

If it all looks chaotic and free of unnecessary frills that’s because it is chaotic and free of unnecessary frills, and yet the Livestream broadcasts from this year’s SBI Key West Worlds were far and away the organization’s finest efforts of the season. Of course it wasn’t perfect—no broadcast ever is. But within the constraints of budget, logistics and the simple fact that a bunch of raceboats strung out on a 4.5-mile course are a challenge to cover, much less make into a compelling and cohesive program, SBI’s Livestream broadcasts, from the Key West Worlds were outstanding.

Five camera angles, including those from two scissor-lifts and one helicopter, definitely upped the Livestream broadcasts’ production value. But the real differentiators were the people who made it happen, namely Cox, the on-air talent and the broadcast’s dedicated crew. 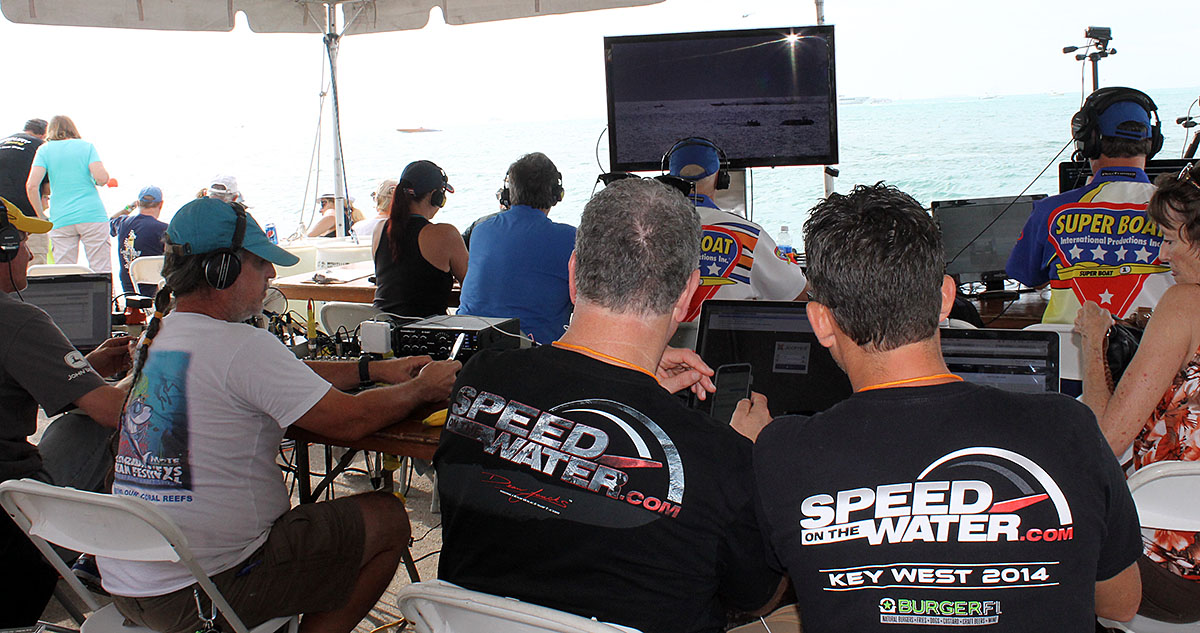 A couple of “embedded reporters” spent Sunday with the SBI Livestream broadcast crew.

“It can be stressful,” said Cox. “In Key West, we were supposed to have power delivered to us for the first race day, but that didn’t happen so we provided our own power source. Over the three days of Livestream, the power went down five times. We never missed a green flag or a checkered flag. We’re pretty proud of that.

“The success of the broadcast hinges on our connection to the Internet, so we also get our own high-speed connection dedicated just to us,” he added. “I wish we could have had more helicopter footage—the fans following online and chatting live about it were screaming for it—but we just couldn’t keep the bandwidth open.”

According to Cox’s analytics, 75,000 to 90,000 viewers in 104 countries watched the Livestream broadcasts from the SBI Worlds. And then there were the SBI broadcast team’s efforts that happened a lot closer to home.

Cox credits SBI president John Carbonell with spearheading the Livestream efforts, as well as JM Associates, which will produce three television shows from the 2015 SBI Worlds, for sharing its assets to enrich the broadcast this year and last.

“John feels that producing the races live online is really important,” said Cox. “He is one who started it and makes sure we have it for our fans.

“The pressure to make sure it all comes out looking the best it can is pretty high, and not just from the fans,” he added. “I grade myself pretty hard, that’s for sure, not just for the fans but for the race teams. The teams can’t wait to have their families and friends watch it. They have viewing parties back home.”