You are at:Home»Racing»Bravo Sarasota, Bravo

Watching Sunday’s online broadcast of the Sarasota Powerboat Grand Prix, grabbing telephone interviews immediately after the races with a few of the winners, and then writing a recap of the 32nd annual event on Florida’s Gold Coast left me in a philosophical state of mind about the current state of the Sarasota happening and the sport itself. And I don’t mean going either the nostalgic (“It used to be a lot better”) or the wistful (“It could be a lot better”) route. As a longtime reporter covering offshore racing, I find those mental exercises pointless and tedious.

So what? Focus on that and you’ll miss what’s happening right now. And while offshore racing has been better and could be better still—to once again belabor the simple and obvious—there’s a lot to like about what’s happening now in Sarasota.

Don’t believe me? Start by asking yourself this question: Why does offshore powerboat racing even exist? It’s not as if the sport is a moneymaker—for anyone. If you believe either John Carbonell of Super Boat International or Ed “Smitty” Smith of the Offshore Powerboat Association, the best-known sanctioning organizations/event producers in the sport, are getting rich, you’re misinformed at best. If you believe any offshore powerboat racing team is operating profitably—consider that four of the five Miss GEICO team partners have full-time jobs outside of the racing effort—you’re delusional.

Between Saturday and Sunday, there were five Powerboat P1 SuperStock races on Sarasota Bay.

Offshore racing exists because the racers love it—end of story. From wealthy gentlemen, such as Bob Bull of the SBI Unlimited-class world champion CMS team, to Stock-class stalwarts, such as Ryan Beckley whose 30-Skater catamaran boasts new sponsor graphics at almost every event to help his racing dreams come alive, they love it so much that they spend money and time without a prayer of return beyond being inside the cockpit during races less than 10 times a year. And that’s enough for them.

As I watched the Sarasota race from my comfortable home 3,000 miles away in Northern California, I appreciated it. Hell, I even enjoyed it.

Yes, the boat counts in each offshore class were lacking. (The Powerboat P1 SuperStock single-engine V-bottom and AquaX personal watercraft class fleets were—on the other hand—rather healthy.) But for two days, there was action on the water in front of Lido Beach and most people soaking in the sun and strolling the sand could not have cared less that they weren’t watching a pride of Super Cats tearing up Sarasota Bay or that Miss GEICO was waxing Alex And Ani—the only other boat in its class in a weekend that saw a slew of two-boat contests—for the third straight time this season. They saw continuous action on the water, and that was good enough entertainment for them.

Plus, the ultimate measure of success for the Sarasota Powerboat Grand Prix isn’t offshore raceboat counts. It isn’t about “the sanction” or politics or affiliation or racer/fan loyalty to a racing organization. (SBI and Sarasota went their separate ways last year and though the split created plenty of acrimony and SBI’s would-be replacement organization failed miserably, it’s time to let it go.) It’s about how much money is raised for Suncoast Charities For Children. And while the official numbers aren’t in yet, early reports indicate it will be another great year for the event and its benefitting charity. 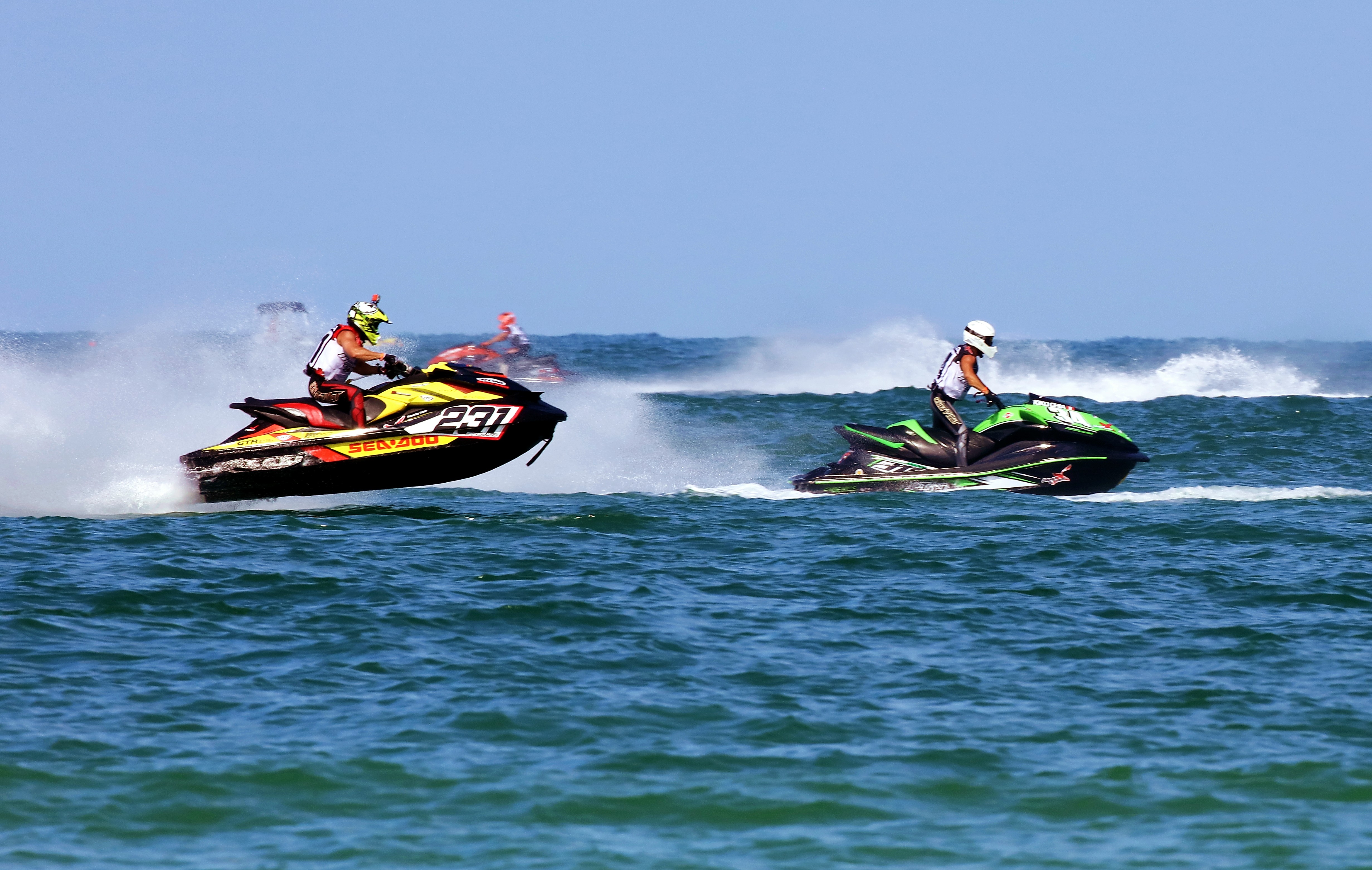 The smallest raceboats competing in Sarasota, Aqua X personal watercraft comprised some of the biggest fleets and helped deliver nonstop action on the water.

Clearly, I wasn’t the only one in a philosophical and rather upbeat state of mind after the Sarasota weekend. In a post yesterday on offshoreonly.com, Miss GEICO driver Marc Granet waxed poetic.

“If you race, the Sarasota race is like the Daytona 500 for our sport,” Granet wrote. “It’s a family-oriented, big hometown-type affair, and almost losing it was a painful part of our offshore history. Honestly I wasn’t sure what to expect. With the exception of more big boats—they will be there next year—it was a tremendous event.”

Granet went on the praise the new block party format, which replaced the parade, the organizers, the race officials, his competition as well as the competitors in the SuperStock and AquaX classes, the fans and even the racecourse itself.

“It was an absolute pleasure to share the course with both these groups,” he wrote. “I can’t wait to do more events like this. The huge crowds always had something to watch. The spectator fleet was huge as always. Awards the way it should be—podium, champagne, beautiful trophy girls, TV, press. Done right!

“Anyone painting the picture other than what I described is off base and probably has an alternate agenda,” he added.

Like most dedicated, educated offshore racing fans, I also wished there had been more competition in the classes I know and love. Like Granet, I’m optimistic for a better “big boat” turnout next year in Sarasota. Beyond that, I’m glad to see—and delighted to report—that despite all the drama of the last two years the overall event is alive and well.