You are at:Home»Racing»Course For The Course 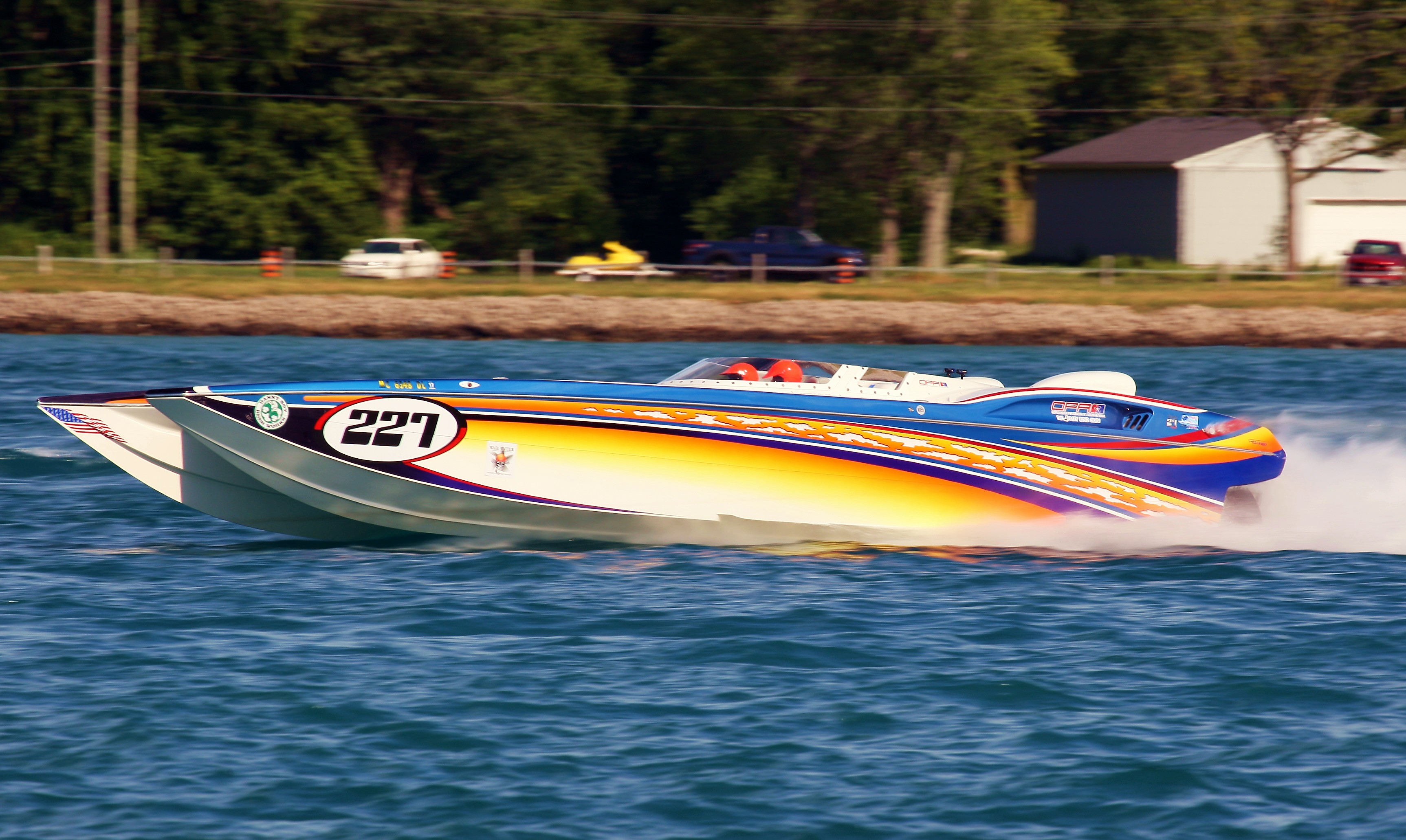 With a few hands-on pointers from Tres Martin, Miller and Jackman earned first place in their first race together. (Photo by Pete Boden/Shoot 2 Thrill Pix.)

Last weekend’s Offshore Powerboat Association St. Clair River Classic in Michigan saw its usual handful of happy winners across the organization’s classes, but none were more delighted with their first-place trophy than John Jackman and Chip Miller in Jackman’s 40-foot Marine Technology, Inc., catamaran powered by twin 1,100-hp engines from Sterling Performance. And why wouldn’t they be? After all, it was Jackman’s first offshore race and Miller, who throttled the boat with Jackman behind the wheel, hadn’t competed regularly in an offshore raceboat since the late 1990s.

Jackman and Miller weren’t expecting a win. They just wanted to have a good time. Jackman, who had been thinking about testing the waters of offshore racing since he bought the boat a few years ago through Scott Sjogren of Sjogren Performance Marine, decided that the St. Clair event—not far from his home in Washington Township—would be a great place to get his feet wet, so to speak. Friends suggested he reach out to Miller, the well-known owner of Miller Marina, and a new racing team was born.

But Miller and Jackman had another member of their team—Tres Martin, the founder of the Performance Boat School that bears his name. So a few days before the event, they found themselves on the St. Clair River with Martin, a former championship-winning offshore racer, in Jackman’s 40-foot catamaran.

“My goal was to teach them how to work together as throttleman and driver so they could drive the MTI through a turn at 90 mph,” said Martin. “How, for example, does the driver let the throttleman know that the boat is running too loose for him?

“Even after a year of running together, a driver and throttleman aren’t usually on the same page,” he continued. “It takes a lot of time. But John and Chip wanted to learn as much as they could before their first race, and they did a great job. I don’t think John had ever turned his MTI like that before.”

“I’m kind of an advocate for the Tres Marin course,” said Miller. “John is an experienced boater, but he had never been taught why a boat does what it does. He asked me if I wanted to race—do a couple of races with him and feel it out—and I said yes. I talked to Tres about it, and we agreed to do the course with John before the race.

“When you get into a raceboat, you’re excited and you have a lot of adrenaline,” he continued. “So your signals between the driver and throttleman can get mixed and garbled. You can confuse each other. So we worked with Tres on communication and we even both drove the boat. It was very helpful. Tres also helped us with setup. And John was fantastic. He’s a lifetime boater, but he wasn’t full of pride. He sat down, listened to all the input from Tres and applied it.”

Racing in OPA’s Class 2 against the Bat Boat and Blown Rush teams, Jackman and Miller in Team 27 were—like the other competitors—restricted to a top speed of 105 mph. According to Miller, they “got a great start” and carried their momentum right through the first turn. The Bat Boat team broke early in the race and soon Jackman and Miller had enough of a lead over Blown Rush that they knew they would eventually lap the green catamaran if they kept at their current close-to-the-speed-limit pace. So they pulled back to average speed of 85 to 90 mph, practiced working together in turns and cruised to victory.

“We had a great day out there,” said Jackman. “The straightaways are easy, but the corners—they’re tough. Tres was like a bird on my shoulder in the turns. I remembered everything he told about high-speed turns, how to keep the nose flat and control the boat. I thought about it in every turn I took. I knew how to drive a boat before I worked with Tres, but not like that.

And there’s more fun to come on the racecourse for Jackman and Miller. “My partner is hooked on racing now,” said Miller. “We can’t wait for Port Huron.”