You are at:Home»Racing»Father-Son Duo Hope for Glory in Sarasota 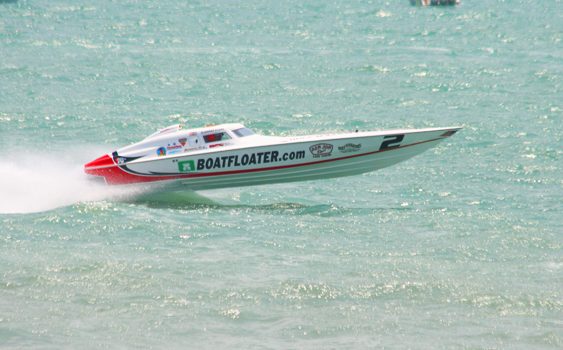 Steve and Stephen Kildahl’s BoatFloater.com is looking to take home the prize this weekend. (Photo courtesy of Offshore Public Relations.)

The Suncoast Superboat Grand Prix turns a stunning 29 this week as Sarasota proudly boasts one of the longest continually running race venues in the country. Its storied history, which includes countless world speed records set in the early morning hours across Sarasota Bay, dates back to a pair of late-great Race Chairmen Gene Whipp and Kevin Brown (both former offshore racers) who grew the event’s success over the years. Often described as the “Indy 500 of Offshore Racing,” the laid-back West Coast-Florida site still remains the place to race when the calendar flips to July.

Local throttleman, Steve Kildahl, has garnered an impressive racing resume with several teams competing in A Class to Superboat Vee Class over the past 28 years that reads: three-time National & World Champion, four World Speed Records along with two endurance records Tampa-Miami and Miami-Nassau. Then in 2007, he joined forces with his son, Stephen (at age 16, he became the youngest driver to enter the offshore arena), campaigning a 28’ Velocity in Manufacturer Production 4.

While dad brought years of racing expertise to the team, son Stephen tweaked his marketing and social media skills to perfection by landing publicity and sponsorships for the family-operated race team. “What I learned through trial and error in trying to find sponsors is this was what they were using to sell their products. It’s the number one way to market their products.”

Last season, the Kildahl father-son team made a successful move up in class to Superboat Vee, capturing a World Champion title aboard Boatfloater.com, a 30’ Phantom outfitted with a 525 hp Innovation engine. That was then, this is now.

“The Class is pretty close all the way around,” Steve explained while waiting for a prop to arrive at his Central Marine shop, so they could grab some test time in the boat. “We’re always trying to go faster,” he laughed. “Our strategy [for Sarasota]is try to get out front and protect our lead. Because of the way the course is set up, with all the different turns and number of laps, we can’t make mistakes on the race course. We need to execute the best we can on all the corners.”

Their joint racing experience has provided complementing lessons well-learned from dad to son and vice-versa. “Do what you think is best,” Stephen said of his dad’s best advice. “Don’t always go try to win the race at the first turn. You have to finish to win. Don’t do anything outrageous. Don’t over-think a lot of things.”

On the other side of the learning curve, Steve has mastered “patience and understanding while we’re on the race course” from his son. “In all the early years and with other teams, there was yelling back and forth. We don’t do that. We’re pretty calm in the cockpit. If there’s a situation, we get it together and we go on.” To date, Steve and Stephen have scored 15 wins that have garnered three Florida State Championships, two National and two World Champion titles. “This is why me and my dad work so well together,” Stephen said. “We think a lot alike.”

Thanks to mega marketing efforts enlisted by this Business Management major at Florida Gulf Coast University, the sponsorship race paid off in dividends for the team this year via Champion Spark Plugs when Stephen was selected as Champion Spark Plugs Driver/Offshore Boat Racing category.

“I was chosen because of the family atmosphere and genuine commitment to the sport…we’re not racing for the money.” He knows it’s show time for the home team this weekend: a hotly contested chase to make their way up  in the national points standing. “There’s a lot of pressure. This is a big race for us marketing-wise and a lot of our fans live here. Being a home town race, we know the waters well. This is our 7th Sarasota race for us and we have a pretty good track record winning five races here.”

As for dad, Steve, his take on the race is a bit more philosophical: the Sarasota venue is a well-designed vehicle that benefits his community via the designated event charity Suncoast Charities for Children, Inc. “We’re racing for the kids and that’s what makes it special.”

For 2013, the nine day festival stages some 15 events with a count down to race weekend that kicks-off Friday, July 5 at 7 p.m. with the traditional Parade of Boats down Main Street, and wraps-up with races slated for 11 a.m. and 1 p.m. Sunday, July 7, along Lido Beach.

Check out www.superboat.com for the latest info and if you can’t make it to Sarsota, then catch live race action streaming on new.livestream.com/sbi/sarasota2013.