You are at:Home»Racing»Highs and Lows From Sarasota 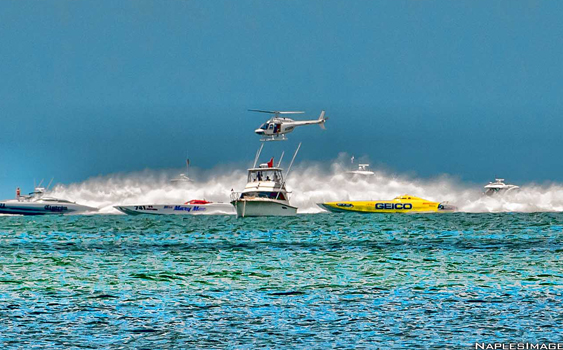 As expected from the start of the races, the fleet at last weekend’s SBI race in Sarasota experienced its share of highs and lows. (Photo by Jay Nichols.)

With a combined 32 catamarans and V-bottoms in the eight-class field for this past Sunday’s races, the Super Boat International Super Boat Suncoast Grand Prix didn’t have anything resembling its largest offshore raceboat turnout in its 29-year history. Then again, what was there was choice, as they say, and the relatively small fleet reportedly didn’t dampen the enthusiasm of the thousands of spectators on hand for the event in Sarasota, Fla.

Every offshore powerboat race—and the Sarasota event is traditionally at or near the top of the SBI regular season races—has its highs and lows. What follows are three of each, arguable of course, and one high/low from Sunday’s races.

2. Though the team sort of backed into (see “High/Low”) its Superboat Unlimited win in Sarasota, the Gasse catamaran returned to the racecourse for the first time in 2013 and came away with a victory. That’s not a bad way to start a season—even at mid-season.

3. Instigator takes first in the Superboat Extreme class: At the end of last season, the Instigator V-bottom team’s owner and throttleman Peter Meyer was set to retire, and Travis Lofland—the former throttleman for the Time Bandit that competed in SBI’s Super Boat Vee and OPA Super V Light classes—was without a ride. Meyer and Lofland decided to join forces in the cockpit for four races this season, and took the checkered flag in their second event of the year. Said Lofland, “We’ve only done two races and there’s still a learning curve, but I’m running with Peter Meyer. He’s a legend.” 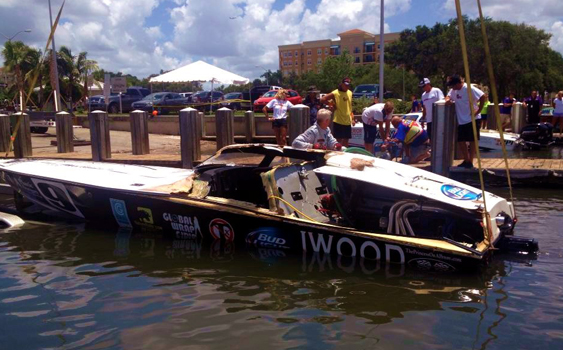 Can you say fortunate? Kurt Jagel and Mark Neimann walked away from the wreckage of their 30-footer.

1. Phantom No. 9 crashes hard: While neither Mark Neimann nor Kurt Jagel were seriously injured in the solo wreck of their Super Boat Vee-class raceboat, the 30-footer was, for all intents and purposes, destroyed. 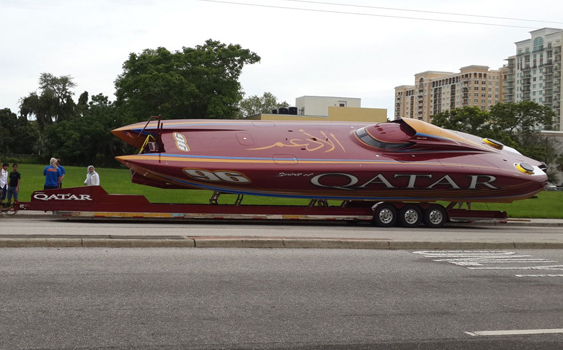 While it showed up in Sarasota, Qatar’s new breathtaking 50-footer didn’t touch the water last weekend.

2. Qatar’s turbine Mystic sits in the pits: There is zero question that Qatar’s Sheikh Hassan bin Jabor Al-Thani and British throttleman Steve Curtis are eager to run their new 50-foot Mystic catamaran with twin 1,500 turbine engines. They planned to test the cat for the first time in Sarasota on Saturday and—if all went well—compete against fellow Turbine class cat Miss Mary Mac on Sunday. A fuel leak problem reportedly kept them on the sidelines.

3. Miss GEICO breaks again: Mechanical gremlins have dogged Miss GEICO, which did finish all of its laps in Sunday’s race, since it took to the water with its new Mercury Racing 1650 Race engine power this season. The bright side, at least for Mercury Racing, is that none of the problems have come from the turbocharged engines. In Sarasota, the issues that forced the team into a third-place finish reportedly were its port gearbox going south and a broken bolt on the rudder, which created three to four inches of rudder play. Said driver Marc Granet, “I know the team was pretty down because they worked so hard to prepare, but we had the boat to win at the beginning of the race.”

Cintron crosses the finish line first but takes third in the Superboat Unlimited class: Keeping your boat together and finishing ahead of the pack are just two of the basics you need to do to win an offshore powerboat race. You also need to mind the rules of the racing road, and one of those rules is not hitting any turn buoys. Running ahead of the Mercury Racing 1650 turbocharged engine-powered Gasse and Miss GEICO cats, Cintron, which is powered by twin supercharged 1,500-hp Stotler Racing engines, clipped a buoy and earned a penalty that moved it from first to third place. Said the team’s throttleman Rich Wyatt, “I’m not nearly as upset as I thought I was going to be. It’s the most fun I can remember having on the water.”