You are at:Home»Racing»Hoosier Support for Summer Racing 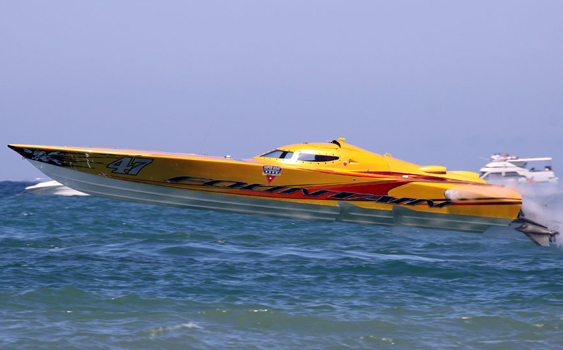 Known for its potentially challenging course, the Great Lakes Super Boat Grand Prix in Michigan City, Ind., will celebrate its fifth anniversary over the first weekend in August.

It had to be more than five years ago now, but the conversation is still vivid. Photographer Paul Kemiel called with some “very exciting” news to share, at least according to him. Kemiel, who has been shooting boat racing for more than 30 years, informed me that his hometown of Michigan City, Ind., would be hosting an offshore race in the summer of 2009—early August to be more precise. He sounded animated and passionate about the potential turnout by both race boats and spectators.

Not quite sure how a race in Lake Michigan off the Indiana shoreline would be received, I agreed to share the news with our readers and asked Kemiel if he would provide post-race coverage of the Super Boat International (SBI) event for Powerboat magazine. He ended up writing a great article that tied in his personal connection with the event’s successful debut and the impact it had on the local economy.

Kemiel, the event’s official photographer, is as excited today about the fifth annual SBI Great Lakes Super Boat Grand Prix coming up in early August as he was back then. Never in his wildest dreams did he expect to be covering an offshore race in his own hometown. Outside of the economic stimulus a long weekend of offshore racing brings to the community—Kemiel said it was estimated between $6 and $7 million last year—the best part is that the Hoosier State, more specifically the LaPorte County Convention and Visitors Bureau (LPCCVB), proved it could put on a good show. Not only has the event delivered hundreds of thousands of spectators to Washington Park Beach for the racing, boat parade and Taste of Michigan City block party, it has also become a favorite among many racers. 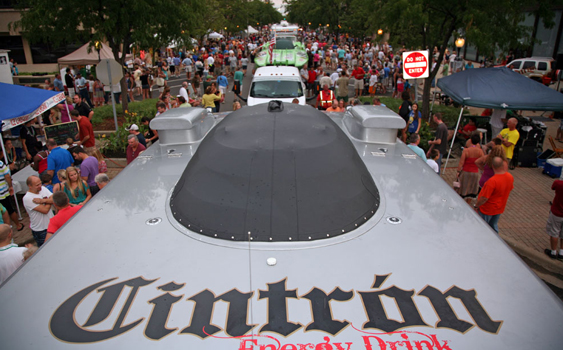 A highlight of the offshore race in Michigan City is the boat parade and block party, which draws thousands of spectators.

“The response we get from the teams each year is outstanding,” said Jason Miller, sports development manager for the LPCCVB. “We don’t see these impressive boats around here very often so when these teams come into town everyone is in awe. Our community really treats the racers well and I know they appreciate that.”

Miller, who grew up going to boat races with his father in Michigan’s Grand Haven and Saugatuck, is a driving force behind the LPCCVB’s boat racing efforts, which now include a partnership with the Greater LaPorte Chamber of Commerce and the City of LaPorte to produce the Maple City Grand Prix on Stone Lake. As the race director for both events, much of Miller’s time of late has been spent on the second stop of the six-race US F1 Powerboat Tour schedule, which takes place this weekend (May 31-June 2). 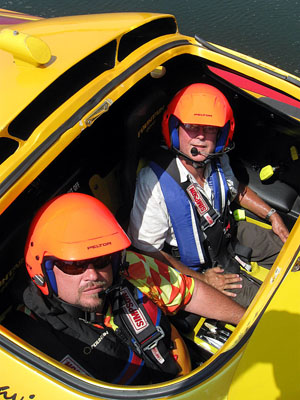 From day one, photographer Paul Kemiel—shown here at right with Dan Davies in Davies’ Global Warmer Fountain—has been an advocate of the Great Lakes Super Boat Grand Prix in Michigan City, Indiana.

“The Great Lakes Grand Prix in Michigan City has pumped more than $20 million into the economy in its first four years, and I see that trend continuing, as I do with the Maple City Grand Prix in LaPorte,” Miller said. “When you combine these national powerboat races with all the sailing races we have, we’re really building a reputation for competitive boat racing in this county.”

Miller was quick to credit Kemiel for suggesting the tunnel boats as the next racing endeavor and introducing him to Jose Mendana Jr., who was instrumental in getting the race together so quickly with help from his father, Jose Sr., of Mendana Racing.

While some of it had to do with his own efforts, Kemiel still can’t believe he’ll be covering two major races within 10 miles of the town he grew up in and still resides.

“I never expected in my lifetime that I’d be attending national offshore and Formula 1 tunnel boat races in my backyard,” said Kemiel, who will be covering the Maple City Grand Prix ribbon-cutting ceremony tomorrow and be on site all weekend to capture the high-speed competition.

Of course, he’ll also have complete coverage of the Great Lakes Grand Prix in August. And who knows, if Miller has his way, Kemiel might have even more races to cover in the future.