You are at:Home»Awesome»Jacksonville Rides Again

Laidback as it is, the Jacksonville River Rally and Fun Run attracts a healthy share of fast boats. Photo by Pete Boden/Shoot 2 Thrill Pix.

That you just show up—rather than sign up—for the Jacksonville River Rally and Fun Run, set this year for June 8-10, says a lot about the character of the event. Of course, there are other mellow go-fast boat happenings in Florida that don’t require registration or an entry fee, such as the equally laidback Joey Gratton Memorial New Year’s Day Memorial Fun Run. But for its longtime participants, the Jacksonville event on the St. Johns River is, well, special.

Among those folks is Greg Harris. If you’re a frequent visitor to OSO, you know him as Cashbar, one of the site’s message board moderators. A residential real estate agent in the South Florida, Harris has attended the Jacksonville run since Bill Pyburn, Sr., a retired firefighter whose same-named son is well-known for owning and running the heck out of exquisite Skater catamarans, began organizing it. When the senior Pyburn stepped out of his role as the event’s primary organizer last year, Harris stepped in.

With a little help from Pyburn and Yvonne Aleman, Harris’ longtime girlfriend, Harris is reprising his role in Jacksonville this year. Despite “retiring” as organizer, Pyburn will be helping out—just as he did last year. And once again, they’ll be raising funds through the event for Camp Amigo, a summer program for children recovering from the emotional and physical scars of severe burn injuries.

“I am once again happy to work with my friend Bill Pyburn, Sr., on an event I hold close to my heart,” said Harris, who owns a 32-foot Skater catamaran called Mad Props. “As the grandson, son and brother of firefighters, I have seen the effects of burns on children’s lives and their families. With that in mind, I jumped at the chance to once again raise money for Camp Amigo to benefit burned children in North Florida. Jacksonville and the St. Johns River have always been such an enjoyable place for me to go boating. So I love to share it with my friends—and anyone else who will give it a chance.” 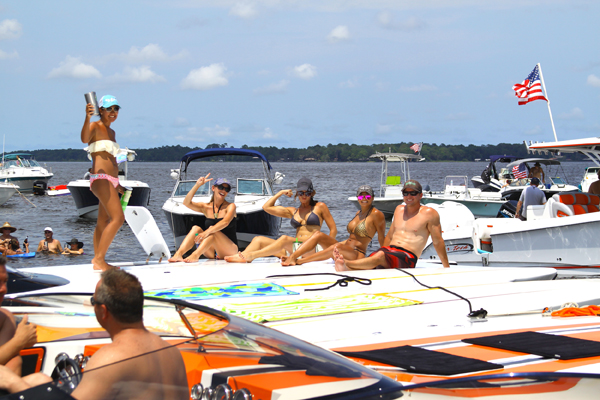 Friday’s Boater Skip Day and Barbecue is always a hit at the Jacksonville event. Photo by Yvonne Aleman.

The three-day event begins with an evening “meet and great” bash at Hooters restaurant Thursday evening, followed by Friday’s traditionally well-attended Boater Skip Day Raft Up and Barbecue on the river at Bayard Point. (Friday night’s party venue has yet to be finalized.) The fun run from Jacksonville to the Crystal Cove Resort for a casual lunch happens Saturday. The Saturday night party returns to River City Brewery.

All of the details, including reservation information for a block of rooms at the DoubleTree Riverfront Hotel, which is donating a portion of the revenue from each room booked to Camp Amigo, can be found on the Jacksonville River Rally and Fun Run Facebook page. (Room rates range from $129 to $179.)

Speedonthewater.com chief photographer Pete Boden of Shoot 2 Thrill Pix will be shooting the event. Aleman, who has done a fine job capturing the event in years past (at least for a Certified Public Accountant with a couple of graduate degrees) will bring her camera gear, but likely won’t have nearly as much opportunity to use it.

“Since she drives Mad Props (Harris throttles the 32-footer) she has a lot more going on,” said Harris. “So Pete will be there to shoot the run in his own unique style.”

Last year, the Jacksonville River Rally and Fun Run attracted 20 boats. Harris said he’s hoping for a bigger turnout this time around, but won’t be disappointed if the run doesn’t grow substantially.

“We put that together last year’s event in only one month so I hope that the extra lead time will draw more people to join us,” he said. “But this is a gathering of old and new friends and a fun run. Nothing is formal and no one needs to sign up.”