You are at:Home»Racing»Offshore Racer Ed 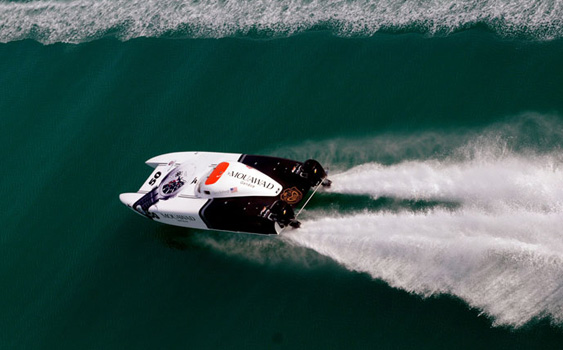 In August, Taylor Chastelet, the 18-year-old son of noted former offshore racer Gerry Chastelet of St. Charles, Mo.—not far from the Lake of the Ozarks—will start his freshman year at the University of Alabama. While he’ll enter the school as one of many students majoring in business management and entrepreneurship, the odds are good he’ll be the only one in his class with six offshore races under his belt by the time he gets there.

Starting this coming weekend with the Super Boat International season-opener in Charlotte Harbor, Fla., Chastelet will be sharing the cockpit of a 32-foot Doug Wright catamaran in the Superboat Stock class with the boat’s owner and throttleman, Stock- and XCAT-class veteran Gary Ballough. The current plan has Chastelet running with Ballough, a 12-time National and World champion, in the GB Racing cat for the entire season on the SBI circuit, and with well-known Stock-class throttleman Ryan Beckley at the Smokin’ The Sound race in Biloxi, Miss., and the Lake Race event on Lake of the Ozarks. Earlier this year, he logged seat time with Beckley in his Stock-class Skater catamaran during a Fort Myers Offshore fun run event.

Since he was a little kid scampering on his father’s Super Cat Light raceboat, Chastelet has wanted to be an offshore racer.

For Taylor Chastelet, who has wanted to race offshore since watching his father compete from 2004 to 2008, the opportunity is literally a dream come true. He counts offshore racing greats Steve Curtis, Randy Scism and his soon-to-be-mentor Ballough not just as “good friends of the family,” but as his longtime idols.

“Man, I’ve wanted to race for as long as I can remember,” he says. “My dad always took me to the races and I’ve been around boats since I was a little kid. I am thrilled to be just 18 years old, just legally allowed to race now, and that I have the chance to get in a boat and race.”

“Taylor has been after me about boat racing ever since I started racing,” says his father. “He’s always wanted to do this, and I think it’s great to give him a chance.”

With fierce competition in one of offshore racing’s most hotly contested classes, Taylor Chastelet has no illusions, much less visions of grandeur, of flashy results on the racecourse in 2014. His goal this season is far more basic and appropriate for a rookie driver. He wants to be educated. 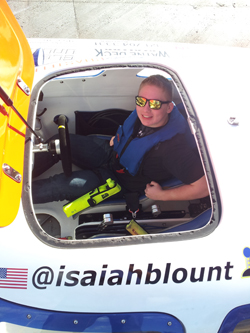 Shown here in one of the DoubleEdge Motorsports Superboat Stock catamarans owned by Ryan Beckley after running in a Fort Myers Offshore event, Taylor Chastelet is on the verge of seeing a long-time dream come true. (Photo courtesy of Ryan Beckley.)

“My goal is pretty simple—I just want to learn to be the best driver I can be,” he says. “It’s not about winning trophies. It’s about getting comfortable and learning. I’ve looked up to Mr. Ballough for a long time and I’ve followed his career. I think it’s fantastic that I have the chance to get in the boat with him and learn this season.”

“Taylor will take it one step at a time,” says Gerry Chastelet. “I am comfortable that he has a great coach, who in my mind is one of the best in the class, to learn from.”

Says Ballough, “I am honored that Gerry respects my racing ability enough to put his son in the boat with me.”

In four days Chastelet will join Ballough in the cockpit for the first time in test sessions before the Port Charlotte event. The following day, he’ll start his first Stock-class race.

As any thinking person would be—much less an 18-year-old young man heading into a hardcore offshore racing environment for the first time—he’s nervous. He’s been around offshore racing long enough to know the risks. But he’s also exhilarated.

“I am more looking forward to the fun than nervous, but I’m not going to lie, I have mixed feelings,” says Chastelet. “This is a dangerous sport. I know that. We’ve lost friends in it.”

Says his father, “You worry, of course. There are always risks in any kind of sport, from high school football to offshore racing, but as long as you understand the risk and the danger, that shouldn’t keep you from competing.”

Of course there are no guarantees, but with Ballough and Beckley, Taylor Chastelet is in great hands. Regardless of how it all turns out, come August he’ll have some great stories to share with his fellow business students in Alabama.