You are at:Home»Racing»Open Water Calling 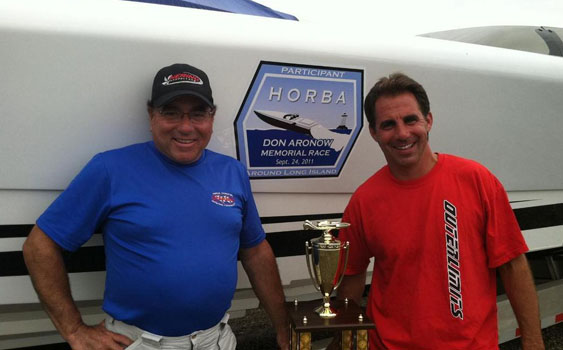 Joe Srgo (left) and Joe Cibellis set the current race record for the run of 3 hours and 5 minutes in Cibellis’ Outerlimits SV 43 V-bottom.

As an offshore powerboat-racing fan and reporter, I believe in today’s near-shore approach to the sport. We live in a visual world that demands instant gratification, and you can’t expect people— beyond a few diehards—to follow and support a sport they cannot see. I don’t make the rules. I’m just aware of them.

And yet I like the idea of true offshore racing far beyond what can be spotted from the shoreline. Maybe that’s because as a kid growing up in a Southern California beach town, I would wake once each summer to the sound of powerboats racing across the horizon. With the exception of the occasional white blip of a roostertail on the horizon, I couldn’t see them. But thanks to the way sound carries across water, I could hear them. And given that our hillside home was 300 feet above and maybe an eighth of a mile inland from the beach, that was something.

So I became a fan of true offshore racing at least 20 years before I began covering today’s version of it. I looked forward to—once a summer—hearing distant thunder created by powerboats I couldn’t see.

That’s an experience a lot of folks on Long Island, N.Y., at least those not standing on its sandy shores, will get to have this summer when the 271-mile Don Aronow Memorial Race Around Long Island kicks off. Organized by the non-profit Historic Offshore Race Boat Association (HORBA) and sanctioned by the National Powerboat Association, the event is scheduled for the weekend of August 22-23.

Think there’s no interest in “endurance” offshore racing? Think again—at present there are 34 boats in three classes that have registered for the event and 10 entries have prepaid. According to Charlie McCarthy, the founder of HORBA, two more performance boat owners expressed serious interest in the race during the recent Miami International Boat Show. Even if 10 of the signed-up teams withdraw, that means 26 boats will run in an offshore endurance race.

The event has attracted endurance racing novices and veterans. Rhode Island-based attorney Steve Peltier and his 18-year-old daughter, Taylor, an accomplished athlete who plays goalie for a boys hockey team, will run Peltier’s 2011 Sonic V-bottom built with twin 390-hp MerCruiser engines in the event. It’s their first endurance race, and the younger Peltier will do the driving and throttling in the 30-footer.

“I called Taylor and said I signed us up,” said Peltier, who wanted to do the race the last time it was run in 2011 but opted out at the last minute. “She said, ‘OK, I’m driving and you’re navigating.’

“I said that’s fine,” he added. “How often does an 18-year-old girl want to spend a weekend with her dad? And she’s a natural behind the wheel.”

On the flip side of the entry list is Tyson Garvin. A familiar name in performance-boat circles, Gavin holds the current New York to Bermuda endurance record, as well as the dam-to-dam record on the Lake of the Ozarks in Central Missouri. So committed to endurance runs is Garvin that he’s building a 46-foot Skater catamaran with twin 1,200- to 1,500-hp diesel engines and a 1,400-gallon fuel capacity to tackle the world’s most epic offshore endurance events.

“We’ve been building this new boat for two years with the sole purpose of breaking every endurance record there is,” said Garvin. “We’ll probably do the Cape Hatteras to New York run on the way to Long Island. This boat is designed to do much longer runs—our ultimate game plan is to set an around-the-world record. With our fuel capacity and low fuel-consumption, we will have almost a 3,000-mile range at more than 100 mph.”

Naturally, the Garvin and Peltier teams will run in different classes. In fact, there are four different length-defined classes in the event: 55 to 43 feet, 42 to 36 feet, 35 to 30 feet, and 29 to 18 feet. All of the boats entered are relatively modern—at present, there are no historic raceboats, which are 15 years old or more by HORBA’s definition, signed up.

For participants who don’t want to do the entire run, McCarthy and company are offering a four-boat rally/relay format. The rally version of the run includes dead-in-the-water—a must for safety— “baton passes” at three stops during the run.

How quickly can the 271-mile run be completed? Well, Stuart Hayim and John Tomlinson did it uncontested in Hayim’s 42-foot Marine Technology, Inc., catamaran with twin 1,350-hp Mercury Racing engines in a smoking-fast 2 hours and 11 minutes. However, the “race record,” which was achieved by Joe Cibellis and Joe Sgro in Cibellis’ Outerlimits SV 43 V-bottom with twin 725-hp Ilmor Marine engines against five other competitors, stands at 3 hours and 5 minutes. 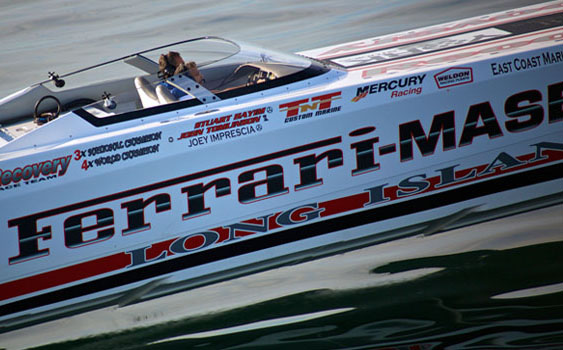 Stuart Hayim and John Tomlinson used Hayim’s 42-foot MTI catamaran to set the solo-boat record for the 271-mile run of 2 hours and 11 minutes.

While McCarthy said he would like to see five to six offshore endurance races a year, he emphasized that such events pose zero threat to anything currently happening in the sport. To that end, he and his fellow organizers made sure the Don Aronow Memorial Around Long Island Race, which was held for the first time in 1963 (before it was a “memorial” event—the iconic Aronow was still very much alive back then) and has happened intermittently ever since, didn’t conflict with any major offshore racing events including the annual Lake to the Ozarks Shootout. (And that’s a good thing, as Garvin plans to pilot his 46-foot catamaran in that event’s diesel class the following weekend.)

“We don’t want to step on anyone’s toes,” said McCarthy. “That’s a big misconception. The board members of HORBA, we all came up racing outboards, first in circle racing and then in enduros. The guys who liked endurance racing moved into offshore racing. We never came back to make fun of the guys who didn’t just because they went around in circles. People love what they love. We just want the racers to have another choice.

“Our dream would be five, maybe six races a year,” he continued. “Maybe one on the Miami Boat Show weekend, two more races in Florida, one on the Great Lakes in June or July, the Race Around Long Island and then Miami to Key West on Saturday during the annual [Super Boat International] Key West event. We would do all of those races at times that wouldn’t interfere with anything else.”

Of course, McCarthy realizes that any kind of offshore endurance racing “series” is a long way off, if possible at all. Making the Around Long Island Race as successful as it can be is his top priority, as well as the top priority for everyone involved, right now. But with just five months to go, the event appears to be shaping up amazingly well. And though the folks not on the shores of Long Island may not get to see the powerboats in action, those paying attention will surely hear them.

“With five months to go, we still have a lot to shake out,” said McCarthy. “But at least we have the enthusiasm.”