You are at:Home»Racing»Some Clarity From Clearwater 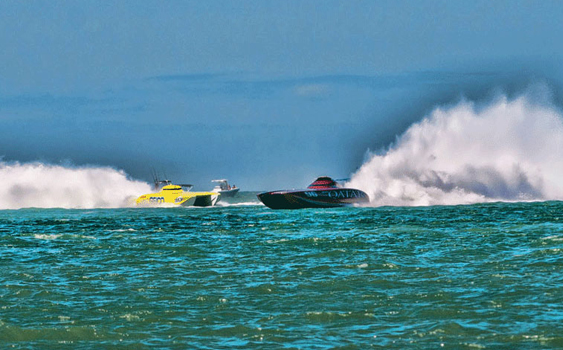 In the spirit of competition—and to put on a good show—Miss GEICO stepped up to the Turbine class compete with Al Adaa’am 96 at the SBI Nationals in Clearwater, Fla. (Photo by Jay Nichols.)

I have to admit, it’s been awhile since I’ve covered any offshore powerboat race other than the annual Super Boat International Key West Offshore World Championships. And even for that, I make it to the Key West Worlds almost every year as much for the Florida Powerboat Club’s Poker Run as for the offshore racing. Oh, and there is Duvall Street, but after a night—two at most—of that I’m done with the scene and more into comfortable dinners with old friends than late-night mayhem with total strangers and, OK, a bunch of younger old friends.

So I had no idea what to expect when the City of Clearwater, Fla., brought three travel/lifestyle writers and me into town for last weekend’s SBI National Championships. Of course, they invited and pampered us in hopes that we would write nice things about their fair city, and to that end I have nothing but good things to say about Clearwater and Clearwater Beach—especially as a venue for an offshore race. The dry and wet pits are close to another, and the idle along the Intracoastal Waterway and through the pass that leads to the Gulf of Mexico isn’t bad. About the only complaint I heard from the racers relative to logistics was that the wet pits could have used another crane—the waits to get boats in and out of the water on Saturday for testing were long.

From the sugar sand beaches to the hotels that lead to them, the view of the entire racecourse is unobstructed. If there’s a better place to watch an offshore race, I haven’t seen it. 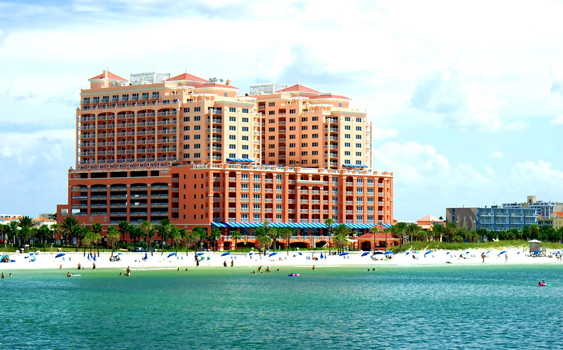 If the SBI World Championships do ever come to Clearwater, visitors won’t lack for pristine beaches and upscale places to stay. (Photo courtesy of Hyatt Regency Clearwater Beach.)

As for accommodations, Clearwater Beach is loaded with hotels like the new Hyatt Regency and the nearby Hilton and everything from down-and-dirty dive-bars to upscale restaurants. On a good day, like early yesterday morning when I caught my flight home (I wrote this on the plane), it takes 25 minutes to get from Clearwater to Tampa International Airport. On a bad day, like last Friday at 5 p.m. when I landed before the race, it can take more than an hour.

Why am I spending so much time on this civic booster-type stuff? Because Clearwater wants to host the SBI World Championships. Not this year and probably not the next, but the people behind the move are ready to go the moment if and when SBI owner John Carbonell says yes. That hasn’t happened yet, but Brian Aungst and Frank Chivas, the founders of the five-year-old Clearwater Nationals, have been in his ear about it. And Carbonell hasn’t said no. (For more information, read the story.)

Even though I’m 36,000 feet somewhere above the Southwest, I can hear the howls of protest from offshore racing fans who hold Key West as a hallowed ground for offshore racing. Combine the economic impact of 50-ish race teams coming to town for a week with 150-plus poker run boats and their crews—plus all the folks who fly in just to be there—and you’re looking at, frankly, a lot to negotiate if there is to be a change. But the notion of switching venues for the SBI Worlds is out there.

Here is some great news from SBI Clearwater Nationals: Five boats competed in the Superboat class, with the National title going to Stihl. That was a solid showing, but better still is that the class reportedly will have eight boats during the Key West Worlds. The proponents of last year’s Superboat class retooling said their goal was to rebuild the fleet. We’re still more than a month out, but it looks like they already have. 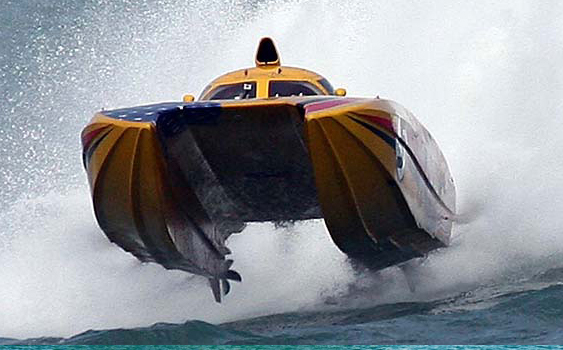 The five-boat Superboat fleet that was in Clearwater should expand to eight boats for the upcoming SBI Key West Offshore World Championships. (Photo by Jeff Gerradi.)

Here’s some more good news: Through the magic of stepping up a class, Miss GEICO became a Turbine-class boat last Sunday. Forget that the 44-foot Victory catamaran has Mercury Racing 1650 engines, on Sunday it went head to head with the Qatar team’s turbine-powered Al Adaa’am 96 Mystic catamaran. With no competition in either the GEICO team’s Superboat Unlimited class or Qatar’s Turbine class, it was a smart and gracious move to make. Most of the fans leaning on hotel balcony railings, on the beach and in the spectator fleet could not have cared less that the boats had different power. They simply loved the show until it ended early with a Miss GEICO spinout.

Here is some interesting news: The planned Qatar Cup collaboration between SBI and Qatar for an offshore race in the Middle Eastern country is on unsteady ground. There are significant logistic, organizational and financial hurdles to overcome, and as is typical in the offshore racing world consensus among race teams has been hard to reach. Do I think it will happen? Yes, in one form or another I believe it will. Does Sheikh Hassan bin Jabor Al-Thani have his work cut out for him? No question.

Here is the best news from the SBI Nationals in Clearwater: The people still involved in offshore racing, a sport beaten down by the recession of late and politics of old, are passionate and optimistic about the future. From the Warpaint team—an almost giddy group I bumped into on Friday night—to Sheikh Hassan, Tony Marcantonio of the J.D. Byrider team, the founders and boosters of the Clearwater event and everyone I met during my three days at the SBI Nationals, everyone was pumped up about the present and future of the sport.

“This race has a great, positive feeling—a really good buzz,” said Marc Granet of the Miss GEICO team. “Can you feel it.?”

Yes, I could. It was perfectly clear.