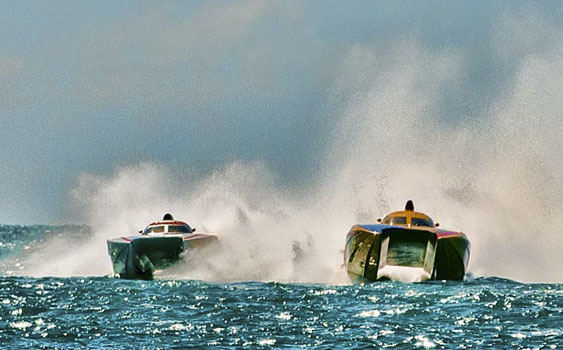 With nine or more boats in the field, the competition is expected to be stiff this year in the Superboat class. (Photo by Jay Nichols/Naples Image.)

The Super Boat International (SBI) season opener is just a couple of weeks away, and there is a buzz surrounding the Superboat class that I’ve yet to encounter in the decade or so I’ve been covering the sport—and for good reason.

With nine viable boats listed on the SBI website, and a few other teams waiting in the wings that could possibly join the class, which features offshore catamarans powered by twin 750-hp engines, the 2014 racing season appears to have some terrific momentum.

Will all of the boats be in attendance at the inaugural Charlotte Harbor Grand Prix in Englewood, Fla., on April 10-13? Definitely not. One thing’s for sure, though, there will be some familiar faces on different teams this year. For those of you who haven’t been paying attention here’s a brief summary with links to each story as reported on speedonthewater.com.

Thanks to a chain reaction after Grant Bruggemann parted ways with longtime teammate and owner of the 388 Skater Team Stihl, J.R. Noble, to join Chuck Broaddus in the 40-foot MTI Broadco (read the story), veteran throttleman Mark Kowalski joined Noble and the Stihl team (read the story).

New teammates Chuck Broaddus and Grant Bruggemann have been working hard to get the Broadco MTI ready for the race season. (Photo by Pete Boden.)

Kowalski, who has teamed up with Tony Marcantonio in the J.D. Byrider Skater for many years, leaves a spot for someone to join forces with Marcantonio this season. The news is still out on Marcantonio’s choice to replace Kowalski, but one thing’s for sure: J.D. Byrider will be on the course this year alongside the recently repaired Team Warpaint MTI (read the story), the new Cleveland Construction Skater entry (read the story) and the always formidable Team CRC MTI, which will be running a limited race schedule after suffering extensive damage at the Key West World Championships last November (read the story).

Of course where would the class be without Bill Mauff and the WHM Motorsports team? Although it appears that the team’s new Skater won’t be ready for the first race, Mauff still owns his old boat so he and Jay Muller will be competing at next month’s Charlotte Harbor Grand Prix.

One also should expect some strong competition from the Qatar Team’s Superboat entry Spirit of Qatar 20, which has respected throttleman Billy Moore running alongside Qatar driver Ali Al Neama. 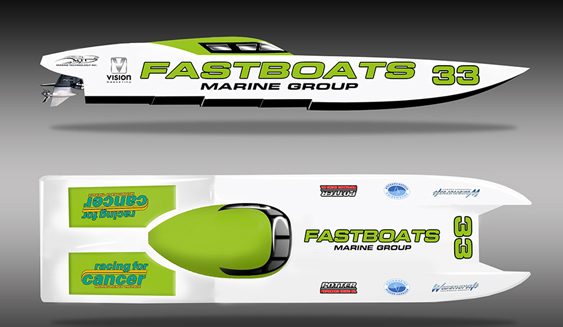 The Fastboats.com 40-foot MTI catamaran is getting a makeover in time for the inaugural Charlotte Harbor Grand Prix in Englewood, Fla. (Courtesy Fastboats.com.)

Last but certainly not least is the Fastboats.com team led by owner and throttleman Randy Sweers. The longtime offshore racer confirmed that the team finished putting fresh engines and drives in the 40-foot MTI this week and is planning to start testing next week. Joined by driver Tony Fiorillo, Sweers also confirmed that the boat is getting fresh graphics for the 2014 season.

I’m not sure how many SBI races I’ll get to watch in person this year, but I do know that if I can’t make it I’ll be on my computer checking out the livestream coverage of each race this year. And while I’ll be keeping a close eye on the Superboat class, I’m also looking forward to seeing the other classes compete. From Miss GEICO and the rest of the Superboat Unlimited field to the turbine-powered Qatar Team and the always-competitive Superboat Vee class, the 2014 SBI just might be one for the ages.