You are at:Home»Racing»Superboat Class Showing Promise and Potential 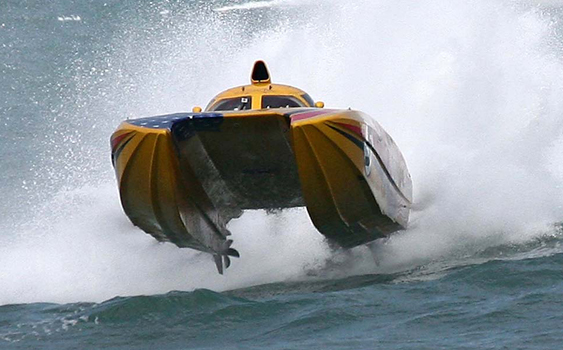 WHM Motorsports currently leads Stihl in the battle for first place in the Superboat class. (Photo by Jeff Girardi/FreezeFrameVideo.net.)

Change comes hard in offshore racing. It always has. For every racer who sees technical modifications as the salvation of his class, there’s another who sees them as the road to ruin. The passion and drive of those involved is such that there tends to be very little in between. Emotions run high in offshore racing. Egos are big—and rightly so, for without them there would no sport—and easily bruised.

So it’s safe to say that when several members of the Superboat catamaran worked together last year to revamp the technical rules for the class, with the blessing of the Super Boat International organization, there was a truckload of ruffled feathers. Gone for good was the Superboat Light cat (commonly referred to as Cat Light) class, but truth be told that once-popular class was on life support and pulling the plug was merciful. Of course, not everyone saw it that way.

New engine specifications—reportedly put in place to promote engine longevity and keep down costs—for the Superboat class also elicited a few howls of protest. Existing Superboat-class teams had to rebuild their engines. Superboat Light teams stepping up to Superboat had to build new power. Not everyone was thrilled.

So where is the class now with five SBI races in the books and two more to go before the SBI Offshore World Championships in Key West, Fla., in November? In good shape with solid fleets—at least from my perspective. True, you could point to last weekend’s three-boat Superboat-class turnout in Michigan City, Ind., as well as its two-boat turnout at the season-opener in Biloxi, Miss., and question the success of the class so far.

And while strong, the numbers don’t tell the whole story. Right now, WHM Motorsports, a well-traveled 40-foot Skater cat is leading the season points fight for first place with Stihl, a younger 38-foot Skater that ran in Superboat Light before moving up to Superboat a couple of seasons ago.

Tony Marcantonio, the owner and driver of the J.D. Byrider Superboat-class catamaran and one of the architects of the class is mostly satisfied with its progress so far. He is optimistic, though guardedly so, that the class will continue to gain momentum and grow.

“I am pleased with the combining of boats because I always thought that too many classes was confusing,” said Marcantonio. “Don’t get me wrong, Cat Light [the former Superboat Light class]was a great class. It was one of the best classes cost-wise, and it’s sad that Mercury Racing kind of let those guys go. If they would have stuck with them, I think the class would still be around. But everything kind of diminished.

“I would like to have more boats in the Superboat class—I thought this would be a stronger year as far as participation goes,” he continued. “But I think a lot of people are in ‘watch and see’ mode. I’ve spoken with the Peppers guys and Bob Teague [of the Amsoil Cat Light team]and they are thinking about converting. We could have seven or eight boats in Key West.”

Among the goals of restructuring the class was to reduce season-long engine program costs. While the season isn’t over yet, that, too, appears to be working.

“I was talking with Frank McComas of Scorpion Racing Engines [the engine company that built the 700-hp naturally aspirated, carbureted engines for Stihl]and they are planning to use the same motors without rebuilding them all the way through the Clearwater [Fla.] race at the end of the season before rebuilding them,” said Marcantonio. “They’ll rebuild them before Key West and we will, too, but it looks like you only have to rebuild your engines once a year.

“We’ll keep working on moving forward,” he added. “There’s still a lot of excitement for this class.”