You are at:Home»Racing»Team Warpaint Rebuilt and Ready for Space Coast Grand Prix

After crashing its 42 MTI in Key West, Fla., last November, Team Warpaint Offshore Racing is excited to have its boat back in time for next week’s race in Cocoa Beach, Fla. Photo by Lucididee Fast Boats.

“We got the boat back from MTI right after Easter,” said Bob Vesper, owner and driver of the 42-foot Marine Technology Inc. (MTI) catamaran that he runs with throttleman Danny Crank in the competitive Superboat class. “They did a beautiful job on the boat. The damage was enough that we really needed to let the manufacturer do the work, and I’m glad we did—she looks great. Now it’s time to get her back on the water.”

Vesper and team manager, Patti Raffa, said the boat is at the team’s Florida warehouse in Port Canaveral and has already been rigged with the twin 750-hp engines from Sterling Performance the team had refreshed right before the Key West races last November. Fortunately, all of the damage was done to the front right side of the boat, so the hardware and equipment was intact.

“We’re going to go out early next week to test run the boat and make sure everything is fine,” said Vesper, who lives in New Jersey. “I’m dying to get back in it. I don’t know how much more we’re going to have dial in after all of the progress we made in Key West. You know, any time you do something to a boat it requires redialing in again. Hopefully we’re not too far behind. We’ll be ready to go either way.”

Raffa said she can’t think of a better place than Cocoa Beach for Warpaint’s return since it’s the team’s home away from home. Two of the team’s most supportive sponsors—Fishlips Waterfront Bar & Grill and Juice N Java Café—are local businesses run by “some of the most wonderful and amazing people you’ll ever meet,” Raffa added.

MTI owner and fellow offshore Randy Scism believes the team has a chance to be competitive this season, especially since he was able to share ideas with the team about boat setup and more. 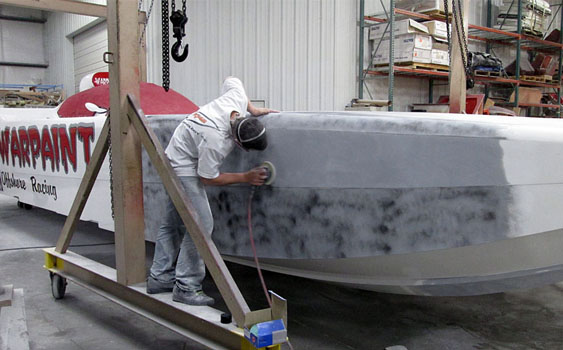 According to Bob Vesper, the owner and driver of Team Warpaint, the crew at Marine Technology Inc. did a great job rebuilding the catamaran. Photo courtesy Team Warpaint

“The Warpaint repairs ended up being a little bigger than we first thought they were going to be,” Scism said. “The boat looks good now—it’s all back to where it was. I’m looking forward to seeing the team run this year. I think they’re going to have a good season. They’re great people.”

Vesper said the team isn’t sure how many races it will participate in this season.

“We’re going to try to do a majority of the races depending on how everything goes,” Vesper said. “Obviously we hope we don’t have any start problems like our class had in Key West and again in the season opener in Charlotte Harbor. We’re optimistic that SBI can learn from those mistakes. If not, we’re not going to keep going out there and banging up our equipment. And we’re not the only team that feels that way.”