You are at:Home»Racing»The Breakfast Club 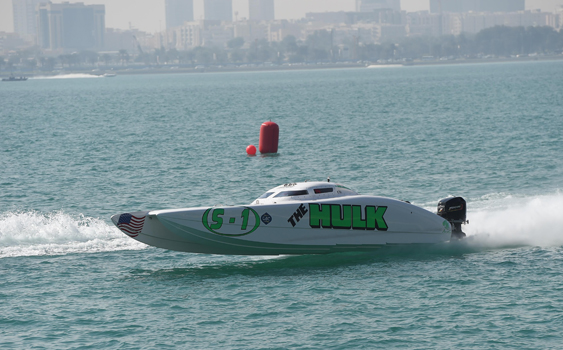 Rob Nunziato of The Hulk: “Our goal for the next race is to put our boat in front of the blue (Victory) boat, rather than behind it. (Photo courtesy Qatar Marine Sports Federation.)

Friday is a “lay-day” during the Qatar Cup in the country’s capital city of Doha, meaning by the time you read this column it will be Saturday here and the teams will be gearing up for the final two races of the inaugural event. “Lay-day” means—as you might have guessed—a non-racing day on which the offshore racing teams are supposed to relax and take in the sights. Except most offshore racers just aren’t wired that way.

Still, I have to give credit to the organizers for even putting it on the schedule. Interested racers can go on a “safari” today, which means heading to Sea Line Beach Resort for some “dune bashing” followed by a trip to an inland sea near the border of Saudi Arabia and enjoying a barbecue lunch in a desert encampment. Camel riding and falconry are supposedly part of the program as well.

If I had to guess, I’d say about half of the racers here will join the safari. The rest, such as The Hulk team’s owner and driver Rob Nunziato and throttleman Dan Lawrence are headed for the pits for tweaking and testing. 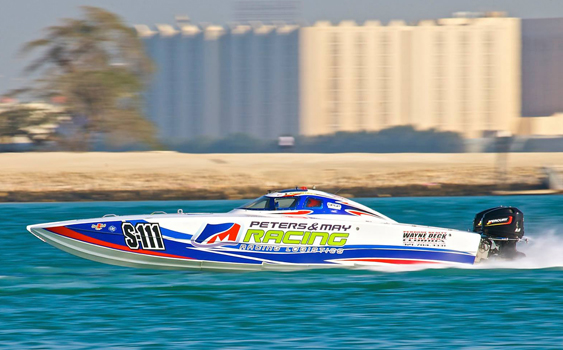 Beckley of DoublEdge Motorsports/Peters & May Racing on his son: “I can’t even go racing without him.” (Photo by Pete Boden/Shoot 2 Thrill Pix.)

I caught up with Nunziato and others—OK, I intruded on them—at breakfast this morning. At first, I thought I’d head to the pits, catch them early and then head out for the safari with my girlfriend, who desperately needs to get away from anything related to offshore powerboat racing. But then I realized that offshore racing teams are armies, and armies travel on their stomachs. So down to breakfast, armed with my note pad, I went.

Nunziato was the first person I bumped into. In yesterday’s Supercat Light race, The Hulk finished within seven seconds of the first-place Victory team, meaning a safari trip immediately nixed from the “to-do” list for Nunziato and Lawrence.

“There was one turn they kept beating us on, coming out of it with a higher speed,” said Nunziato. “We’ve just got to get through that turn better. We didn’t come up with a solution the first time. Our goal for the next race is to put our boat in front of the blue [Victory] boat, rather than behind it.”

End of interview—you really can’t put it any more clearly that than that—so I strolled to another table and sat down with Ryan Beckley, the owner of the DoublEdge Motorsports/Peters & May Racing team, and his 17-year-old son/crew chief Chris Economides. I asked them how meaningful it was to be together as a family team in Doha.

“I can’t even go racing without him,” said Beckley, who estimated that he and Economides have been to 35 races together. “He knows everything about the boat—he even tells Tanner [Lewis, Beckley’s throttleman for the Qatar Cup] what to do. The first time I came to the Middle East to race five years ago, I met his mother in the airport. I was on my way to Dubai.”

Asked the same question, Economides supplied an age-appropriate response. “It’s awesome,” he said. “But one of my teachers wasn’t very happy I had to take a week off school.”

By decree of the woman in charge back home, Economides and Beckley were going on safari. No way her son was going to travel more than 8,000 miles to the Middle East and experience nothing other than the wet pits on the race site.

Hanley of Pro Floors Racing: “Being here is the opportunity of a lifetime.” (Photo by Pete Boden/Shoot 2 Thrill Pix.)

For my final interview of the morning, I descended on the Pro Floors Racing Team. Throttleman Chris Hanley and driver Wayne Valder brought their 34-foot Skater catamaran with eight-year-old stock Mercury Racing 525 EFI engines all the way from Auckland, New Zealand to be here—something like a 20-hour flight for the team. For their trouble so far, they earned a third-place finish in yesterday’s Supercat race.

Asked why he made the journey, Hanley quipped, “For the girls. But no, really, being here is the opportunity of a lifetime.”

Looking into the sun on the down-leg of the course, they said, was the biggest challenge of the race—a sentiment echoed by almost every racer I spoke with yesterday and today.

“We actually had to pick a point between two buildings and aim for it because we couldn’t see the buoy,” said Valder. “If we could finish where we finished yesterday we’d be over the moon.”

Added Hanley, “Now it’s back to work on the boat.”

Meaning no safari experience is in the cards for the Pro Floors Racing team, which does the bulk of its racing in a 39-foot Marine Technology, Inc., catamaran (the former Dirty Duck boat) on a circuit in Australia, pretty much a milk run from Auckland compared to the trek to Doha.

And now that I look at my watch, the safari adventure is out for me, too. For our cultural experience, my gal and I will hit Souq Waqif, a completely recreated Bedouin “standing market” where you can buy everything from turmeric and ginger and Qatari headdresses and incense when it opens today between 3 p.m. and 4 p.m. And from what the guidebook says Souq Waqif has lots of great places to eat, which a good thing since I skipped breakfast. At least the eating part.