You are at:Home»Racing»Why Offshore Racing Needs the Sarasota Race 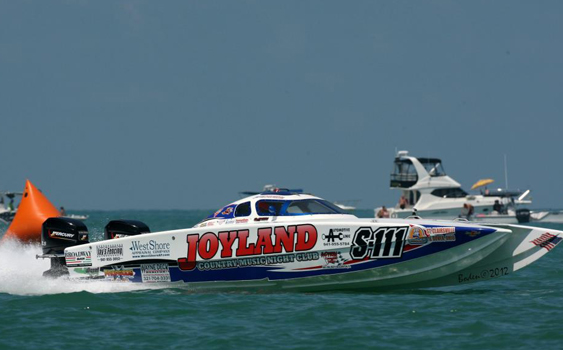 When he runs in Sarasota, Ryan Beckley’s boat is sponsored by the Joyland Country Music Nightclub and Bar.

Growing up in Key West, Fla., Ryan Beckley couldn’t help but be exposed to the world of offshore racing. Every November the best teams in the world made the pilgrimage to arguably the most challenging course on the circuit and took over the United States’ southern-most town.

But it could be argued that another city known for hosting an offshore powerboat race, Sarasota, Fla., has had a greater impact on Beckley’s life. He rode in his first race as a navigator in Jamie Coates’ 35’ Fountain, Banker, in the Suncoast Offshore Grand Prix held annually around July 4th on Florida’s West Coast. He has competed with his Double Edge Motorsports team in the Sarasota race in the Stock class since 2005. Beckley, now 38, relocated to the city in 1994 and established a successful graphics/signage business in Sarasota and he owes much of the company’s early success to the contacts he made in offshore racing. He and his wife Debbie live there with their new son Connor (he turned six weeks old in early May).

Beckley is one of a handful of offshore racers who reside in Sarasota. Steve Kildahl, Beckley’s neighbor, has competed in every Suncoast Offshore Grand Prix since the start of the event. “Diamond” Dave Branch calls Sarasota home and hosts a huge party in the pits every year. Dr. Bruce Kruglick, who has driven for Branch, is also from Sarasota. 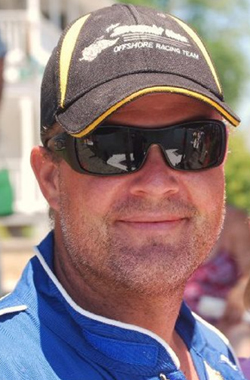 Ryan Beckley has found a home in Sarasota, Fla.

So when there was discussion that the event might not be held this year, Beckley and fellow racers and performance boaters were shocked. “It’s the biggest event that happens in a small town,” exclaimed Beckley. “You can’t go to a big town and have a boat race and have anybody care.”

For six years from 1993 through 1999, I covered the Suncoast Offshore Grand Prix when I was Editor at Powerboat magazine. I was fortunate enough to compete in the Amateur Challenge for first-time racers with Velocity Powerboats President Steve Stepp one year. A few years later, I navigated for the Carlos N Charlie’s team of Curt Harber and Rodney Rudell in their 42’ Fountain and we won. More than 100 boats would show up for the event and it transformed the city. Standing on the docks in front of the Boathouse restaurant at the Sarasota Hyatt when the race director gave the order for the racers to start their engines was nothing short of awesome, albeit temporarily deafening. From the course that takes the racers close by Lido Beach so fans can really see the race from the shore to walking-distance convenience of the 10th Street launch ramp, you won’t find a better site for offshore racing.

One of the first questions I would hear racers asking each other at the start of a given season was, “Are you going to Sarasota?” It’s a July 4th tradition that needs to continue. The Unlimited hydroplanes have Madison, Ind., on that weekend. Offshore racing has Sarasota. It’s that simple.

The Suncoast Offshore Grand Prix should be the model for any powerboat race because it’s not merely a race. It’s a multi-day event. From the Friday evening parade to the Kilo Speed Record course to the Amateur Challenge to the actual race on Sunday, it’s a happening that has drawn competitors from around the world. The Victory Team first appeared on the offshore scene at the 1992 Suncoast Offshore Grand Prix, which was Beckley’s first time at the event. With race directors such as the late Gene Whipp and Kevin Brown in control, the event raised millions of charity dollars for the Suncoast Charities for Children and every year, local businesses such as hotels, restaurants and bars made serious bucks in tourism dollars.

Fortunately Lucy Nicandri Vice President of Marketing and Special Events for the Suncoast Charities for Children convinced the city of Sarasota to reconsider and pay Super Boat International the $80,000 sanctioning fee. It’s estimated that the city makes $14 million on the race every year. The good news is that the fee for the event is already in the budget for 2014. That’s music to Ryan Beckley’s ears.