You are at:Home»Racing»XCAT World Series Heats Up 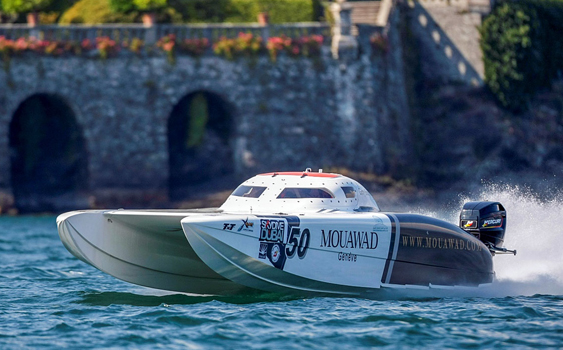 Currently in second place overall in the XCAT Series, the Mouwad team of Omar Danial and Gary Ballough is confident heading into this weekend’s race in China.

While a majority of the performance boat enthusiasts will be fixated on Key West, Fla., for the remainder of this week and through the weekend as the Super Boat International World Championships and Florida Powerboat Club’s Key West Poker Run converge, I’d like to steer a little attention toward some exciting racing that is about to take place in the Far East.

With 13 teams expected to participate in the sixth leg of the Union Internationale Motonautique (UIM) XCAT World Series in China this weekend (Nov. 8-10), there’s plenty of news coming out of the competitive international circuit featuring outboard-powered cats. Taking place on Meishan Bay in Ningbo, the event marks the first time the series has raced in Chinese waters. The Chinese Grand Prix follows a pair of September races in Italy, which marked the first ventures outside of the United Arab Emirates for the up-and-coming series.

Coming off fourth- and third-place finishes in Italy’s Stresa and Arona, respectively, the Mouwad team is hoping it can do enough in the final two races to overtake the current leader in the points standings, the Fazza team, which is part of the Dubai-based Victory Team that fields three boats in the circuit.

Fazza sits just 136 points ahead of Mouwad (1201-1165) with Skydive Dubai (806) and Victory Team (750) in third and fourth place overall. With 400 points awarded for a race win, Mouwad teammates Omar Danial and Gary Ballough are hoping they find success in China this weekend. 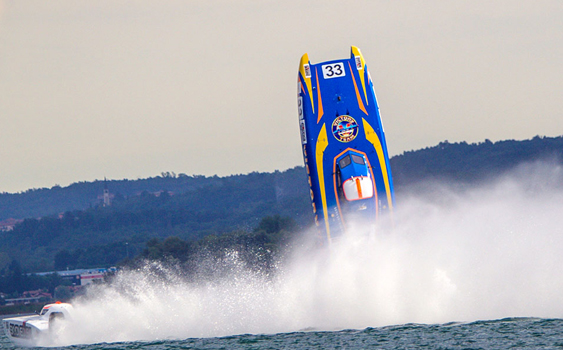 Two months after the team flipped its boat at the race in Arona, Italy, the Victory Team will enter a new boat in the Chinese Grand Prix this weekend.

“We are confident in our abilities to adjust to all conditions the XCAT Series poses, which is why we are a podium team,” said Danial, owner and driver of the 32-foot Doug Wright cat that is throttled by Ballough, who hails from Florida. “We go racing with the state of mind to be a podium team. We can’t claim to have all the resources available to take first place in the series, but if we do get there, it will be because of our tenacious work and talent.”

Although a shot at the overall championship is likely out of reach for the fourth-place Victory Team, that didn’t stop the team from putting together a whole new boat for the Chinese Grand Prix after Salem Al Adidi and Talib Al Sayed flipped during the race in Arona.

Fortunately the teammates emerged unscathed and even more determined to reach the podium in Ningbo. And ominous news for their rivals is that the newly constructed boat could be even quicker.

“We have already built a new boat to substitute the crashed boat with similar features or even better ones than the [previous]boat,” Al Sayed explained. “We are expecting a competitive and exciting race in China due to it being the last quarter of the series.” 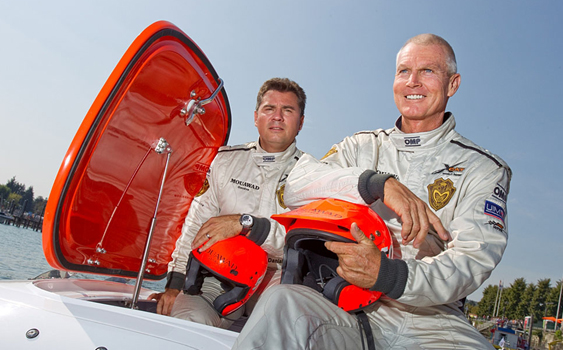 Gary Ballough (right) and Omar Danial are focused on finishing the 2013 XCAT Series strong to bring home a world championship.

“We are confident in ourselves, the boat, the team and the management who support us significantly,” Al Sayed added, pointing to the rivalry within the Victory Team stable (between themselves, Fazza and Skydive Dubai) as a great motivator. “It is obvious that there is a competitive spirit between us, however we have the same aim of winning the championship and so we rely on teamwork effort.”

If there’s one thing you can count with the tightly contested XCAT World Series, it’s that all of the internationally represented teams will be chasing the checkered flag with their best foot forward. I’m sure the same goes for all the teams preparing to race in Key West this week.