Although temperatures were nowhere near the same as they were on June 29, 1994, last weekend the boating friendly city of Lake Havasu City, Ariz., threw a massive party to celebrate the 25th anniversary of the day when the city famous for its London Bridge soared to 128 degrees and claimed the highest recorded temperature in a United States city.

Officially, the hottest recorded temperature in the country is also the hottest temperature ever recorded on the planet—134 degrees in Death Valley, Calif., in 1913—but we all know there weren’t too many people there to witness that day. On the other hand, there were thousands sweating it out in Lake Havasu 25 years ago, and there were thousands in attendance last week when the city hosted a “Hot for Havasu” celebration on a day when the high only reached 103 degrees.

“We’ve always known we were hot, both literally and figuratively,” said Terence Concannon, president and CEO of Go Lake Havasu. “This party is perfect to celebrate all of the hotness surrounding our famed party spot, the Bridgewater Channel, as well as our summer temperatures that makes our lake even more appealing than it is just naturally.”

“Hot for Havasu: America’s Hottest Party” ran from 3 to 6 p.m., last Saturday at the Koko Beach Stage in the Bridgewater Channel. The party marked the first time the city celebrated its record temperature. 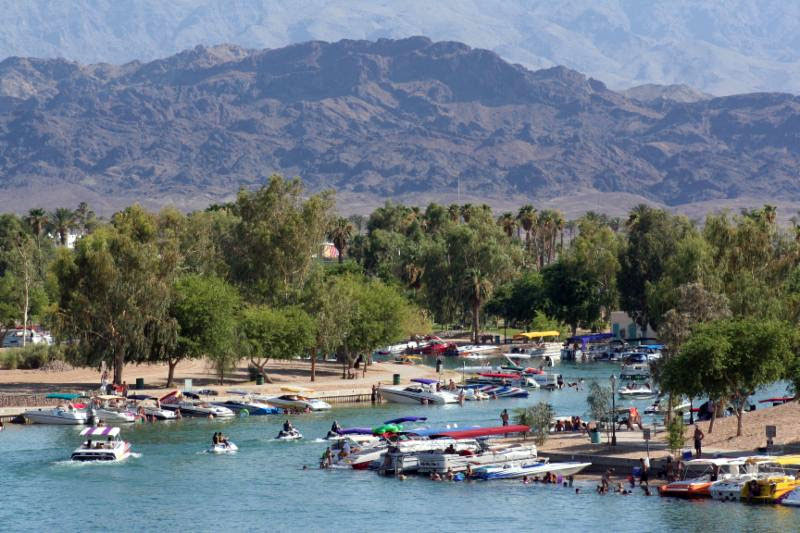 The party featured Kicker Marine Audio’s new double-decker pontoon boat, VIP cabana boats, a floating tiki bar, a “mermaid,” an ice sculpture carving the high temperature for the day in ice, a chocolate chip cookie baking contest on the dashboards of cars, and an after party at Kokomo’s at the London Bridge Resort, the party headquarters.

“This is a fun event for us,” Concannon said. “We’ve asked the Mayor to declare it an official lake day. If the East Coast and Midwest can have snow days; we can have lake days.”

By far the best way to cool off in Lake Havasu City is to go boating on the lake. Photo courtesy Go Lake Havasu

From the looks of it, the city—which is about 275 miles southwest of Furnace Creek, Calif., the unincorporated region of Death Valley National Park that recorded the 134-degree temperature back on July 10, 1913)—hosted one heck of party that included swimming, hula-hooping, music and other entertainment.

So, next time you’re in Havasu to enjoy the lake, a boat company regatta or either the Desert Storm or Monster Storm poker runs in April and October, don’t complain about the heat. Be thankful it’s not 128 degrees like it was back in 1994.