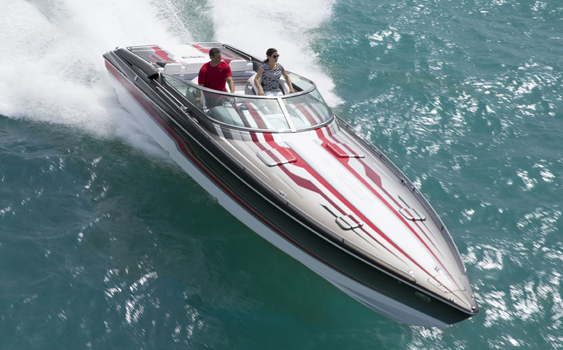 Powered by the new Ilmor MV8 570 engines, Formula’s 353 FAS3Tech performed as impressively as it looked with the company’s new Stiletto graphics. (Photo courtesy of Formula Boats.)

To validate its new MV8 570 engines, Ilmor High-Performance Marine teamed up with industry leader Formula Boats to put the first production pair of the 570-horsepower, LS-based small blocks in the company’s popular 353 FAS3Tech. The project, according to both companies, has been a success and the partnership has extended into joint marketing opportunities, including showcasing the boat at events such as the Desert Storm Poker Run in Lake Havasu City, Ariz.

That’s where I had the pleasure of riding in the boat—for the second time—to get a feel for the 35-footer’s performance with the naturally aspirated engines under the hatch. With Ilmor’s Ian Hawkins and Jason Mast and Formula’s Greg Beer providing the hospitality aboard the 353, we took the stepped V-bottom out on a very choppy Lake Havasu thanks to more than 150 poker run boats and probably two or three times that many spectator boats cruising up and down the Colorado River waterway.

That was the exact experience I was seeking when OffshoreOnly.com asked me to review the boat considering my first encounter with it was the day before the Miami International Boat Show opened and it was a quick ride back and forth along a calm Government Cut section of Miami’s Biscayne Bay. Not to mention the boat and its power plants weren’t even dialed in.

First things first, the overall appearance of the Formula was stellar from its dockside location in front of the Nautical Beachfront Resort. Adorned with the company’s Stiletto graphics paint job, the boat was dressed to thrill, no doubt about that.

Between the red-hot Ilmor engines, which glistened with the mirrored hatch open, and the precise craftsmanship of the silver, red and white upholstery in the cockpit and on top of the engine hatch that matched the paint job, the 35-footer was an eye-catcher. It was easily one of the best-looking 353 FAS3Tech models I’ve seen from the Decatur, Indiana-based company. 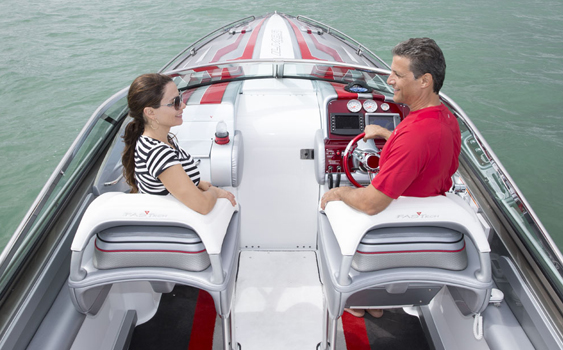 The cockpit of the 35-foot Formula was comfortable whether you’re cruising along with the wind in your face or sitting idle having a conversation. (Photo courtesy of Formula Boats.)

I’ve been on probably a half-dozen 353 FAS3Tech test rides over the years with various forms of Mercury power, and I’ve seen countless models at events across the country, so I understand the boat was designed for a complete boating experience, lacking nothing in the amenities department. Such was the case with this Stiletto-themed edition.

Seating in the cockpit consisted of a four-person rear bench and a pair of electric bolsters with electric footrests so the driver and passenger can dial in a comfortable position. Featuring red carbon-fiber dash panels, the driver’s station to starboard included two Livorsi Marine Mega gauge tachometers with chrome bezels mounted above side-by-side displays for the Garmin GPSMAP 740S and the Ilmor engine monitoring display, which offers a recordable and downloadable information logging system. 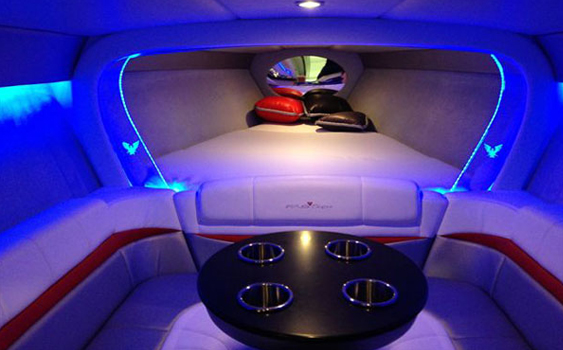 With a nice mix of lavishness and usefulness, the boat’s spacious cabin was well appointed by the Decatur, Indiana-based company. (Photo courtesy of Formula Boats.)

As expected, the cabin was decked out. Formula used Ultraleather for the spacious V-berth and the U-shape lounge that had a removable Corian cocktail table in the middle. The cool blue LEDs that accented the side panels as well the acrylic pieces with the Formula logo that extended off the bulkhead between the lounge and berth, were a nice touch. A head compartment, a refrigerator, a 19-inch television and an entertainment center with a stainless-steel sink added to the list of cabin highlights.

Moving on to the guts of the project, by no means did the 7.4-litre, 454-cubic-inch engines feel overwhelmed in what is a fairly heavy boat—more than 10,000 pounds with fuel and gear onboard. In fact, the acceleration thrust was more than adequate as the boat popped on plane quick enough as not to lose sight of other boats around us. 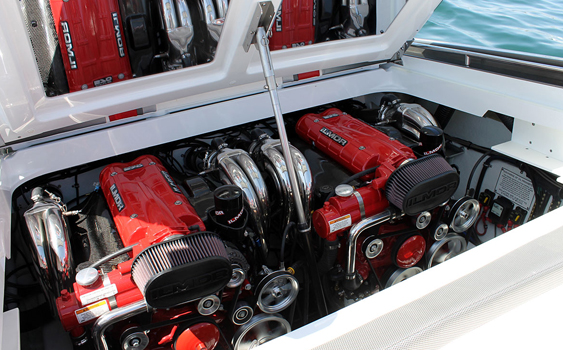 The new MV8 570 engines from Ilmor fit neatly in the engine compartment. (Photo by Jason Johnson.)

According to Paul Ray, president of Ilmor Engineering in Plymouth, Mich., the boat has responded best in testing sessions to the shorter lower units on the IMCO Marine SCX Advantage drives with extension boxes. Settling on a 1.50:1 gear ratio and Mercury Maximus 15¼” x 25” five-blade propellers, both Ray and the crew at Formula are happy with the results. 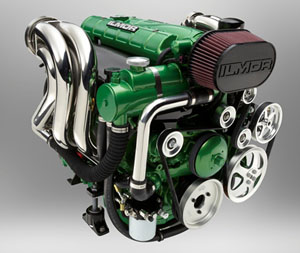 The first set of production 570 engines from Ilmor was installed in the 35-foot Formula. (Photo courtesy of Ilmor Marine.)

I didn’t notice any major responsive differences between my ride in Miami and the one in Havasu, but then again the conditions were vastly different. I can say the boat felt solid and capable as it cut through and across anything it encountered. It handled smoothly in sweeping turns and tracked nicely despite quite a bit of cross chop.

The most drastic gain from dialing in the boat came at the top end. In Miami, the 35-footer reached 81 mph on GPS. In testing two months later, Formula representatives reached a top speed of 85.8 mph at 6,000 rpm—the engines’ max rpm—during a breezy 55-degree day on Grand Lake St. Marys in Celina, Ohio. At that speed the engines, which can run on 91-octane fuel, burned a little less than 1 mpg.

Overall, the boat’s performance was totally satisfying thanks to the state-of-the art, emissions-certified small-blocks, which are also available for repower projects not just new boats.

“It’s been a real success story from the start—putting those engines in that boat was about the most perfect thing we could have done,” Ray said.

In my opinion, Ilmor could have taken an easier road to test, or better yet showcase, its new MV8 570 engines. Say a sportboat that weighed less, or maybe even a small cat, which would have been a real rocket.

But that wasn’t the point of the validation project as Ilmor sought a partner with the same demand for quality and engineering, and found that in Formula. 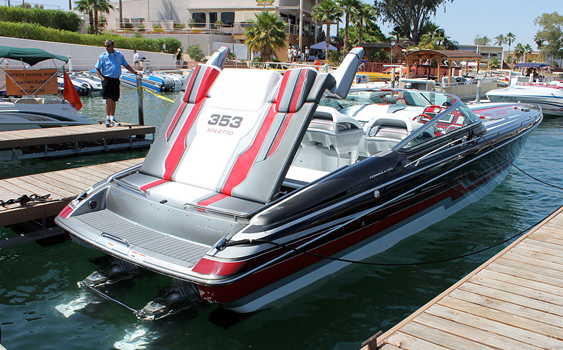 “Formula has a reputation for putting out a product that’s bulletproof and anything we do has to match that quality,” Ray said. “Fortunately we put that pressure on ourselves as well so it’s not a matter of us having to change anything in-house. I think that’s why we’ve worked so well together over the last two years. Their standards and our standards are pretty much aligned.”

We’ll see down the road if the project was a match made in heaven, but one thing’s for certain—there’s a tremendous amount of potential in the latest performance platform from Ilmor.