You are at:Home»Rivalry»Aussie Proctor Takes 12-Second Win in Latest Battle with Catalina Rival 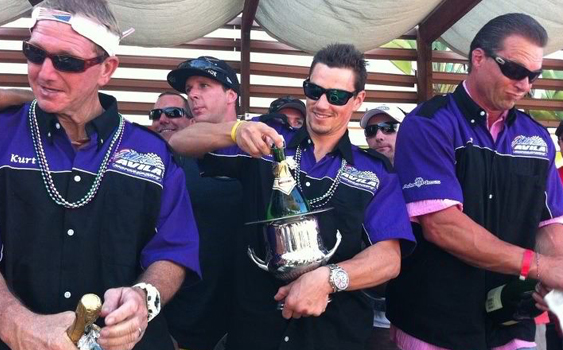 Ahead by less than 12 seconds after hammering through 52 miles of rough-and-tumble seas, Aussie Peter Proctor landed the latest blow in big league offshore ski racing’s fiercest rivalry with an overall win at the 64th annual Catalina Ski Race off the Southern California coast.

Haig had won nine of the previous ten Catalina races (with a second), including a streak of eight straight. Last year Haig, a contractor from California,  skimmed nearly six seconds off his own record and finished 5.5 seconds ahead of Proctor, who at 26 is eight years Haig’s junior. Haig skis behind Randy Davis’ factory-based 43’ Nordic.

It was Proctor’s second win, notched over a 70-boat field.

Catalina has become a liquid battleground not only for the two skiers but for the boat owners as well. “I spent 364 days obsessed with getting back those six seconds from last year,” said Avila, himself a former marathon champion and Ski Racing Hall of Fame inductee.

That quest started with a new boat, a 47’ Fountain that was immediately sent  to Jimmy Andersen’s Petaluma–based Ace Marine, which cut the brand new boat’s bow to make the event’s 43’ length maximum. Avila yanked the three 598 cubic inch blower motors from his old boat, and sent them to BoostPower USA, where they were torn down and reconfigured to build more power.

It was a faster and rougher ride than last year for Proctor. “There was more movement in the water this year than last,” he said. “There was a lot of traffic coming across the channel, and some huge rollers. I never got comfortable—the pace was always changing. It was way rougher, and not consistent at all.”

No one but Haig and Proctor have ever skied the event faster than Wayne Mawer in his third place finish behind Tim Herbst’s Terrible Herbst, a minute and nine seconds off the pace at 52:05. Mawer led the outbound leg at times before Avila gunned the Fountain into the lead at the halfway point, and never relinquished. Team Nordic never led.

“We pushed as hard as we could, but Mike was really brutal this year,” Davis said. “Every year we take bigger and bigger chances, and at some point you have to back down. We reached that point this year.”

Avila, who was horrifically injured in a marathon skiing accident in 1989 and has raced Catalina as a skier or driver 40 consecutive years, has been criticized for his aggressive driving style through the years, and took offense to Davis’ thinly-veiled reference. 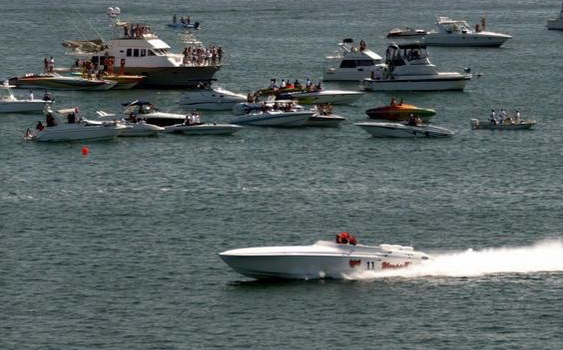 Warpath off the coast of Catalina.

“Randy has said I’m obsessed with winning and that’s true,” Avila said. “Yes, I believe that second place is for losers, and yes, I will do anything to win—but I won’t risk my skier. Randy is better at the PR end of it, but just remember that he beat me last year. If I’ll do anything to win, and he beat me, what does that say about Randy Davis? Todd is a hero and will go in history as one of the greatest skiers to cross the channel, and they’re a great team. But believe me, he (Davis) races just as hard as [I do].”

He added, “Gary Steele used to get the same criticism when he pulled me, and when I got hurt it was the fault of my standing on a little piece of wood going a hundred miles an hour, not my boat driver.” Avila lost part of the use of his arm after a horrific ski crash in 1991.

From his perspective, the bigger risk this year came with trashing his entire setup and starting over with a completely new combination, after coming within six seconds and two boat lengths of winning last year—a performance that would have tied Haig’s event record had he not reset it.

Minutes after last year’s race, Avila announced his intention to rebuild with a Nordic, built by Randy Davis. It didn’t come together: Avila says a lack of communication got in the way, and Davis contends Avila waited too long to order it, and he couldn’t commit to completing it in time.

“It was probably better that we ended up with a Fountain anyway,” Avila says. “The Nordic is obviously a great boat, but this just seems a little cleaner way to go.”

He say, “It was kind of weird cutting up a brand new boat,” referring to the fiberglass surgery necessary to make the Fountain legal.

“Usually we run fuel injection on those motors,” said BoostPower owner Alexi Sahagian, “but there’s sort of an old school mentality in ski racing, so we built ‘em with carburetors, and mechanical fuel pumps.”

It was a huge day for Fountain hulls, which finished first in seven of 20 classes. Here are the complete results.