You are at:Home»Badge of Honor»Boyne Thunder Poker Run Marshal Boat To The Rescue

While dialing Lawrence Coelho’s number yesterday, I was unsure what kind of mood he’d be in and whether he’d even want to talk about his experience at the Boyne Thunder Poker Run in Northern Michigan, an event he’s told me is one of his favorite runs of the year. The California native, who I did a feature on in the March/April 2018 Speed On The Water digital magazine because of his road-warrior dedication to running his two DCB Performance Boats models at events across the country for several years, suffered an unfortunate mishap during the 16th annual affair. 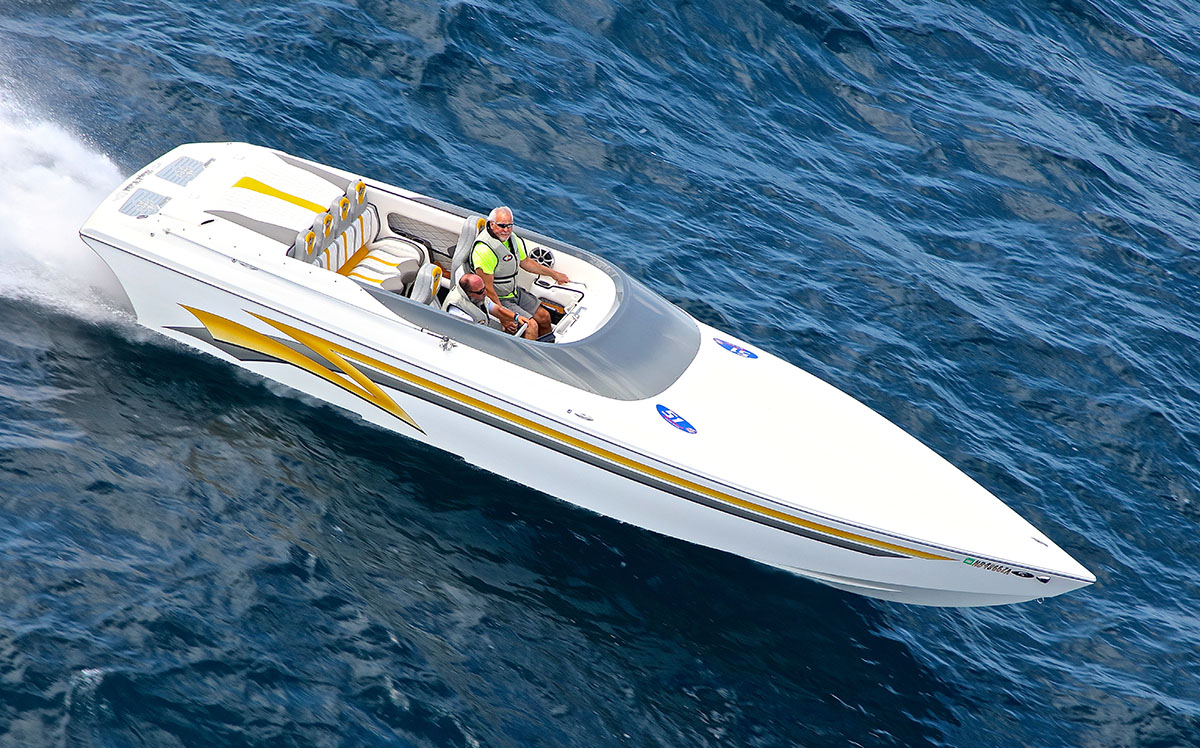 Despite a mechanical issue and a lengthy tow back to the marina, California’s Lawrence Coelho still had nothing but praise for the Boyne Thunder Poker Run in Michigan. Photo by Pete Boden/Shoot 2 Thrill Pix

Fortunately for him though, one of the poker run’s volunteer course marshal boats was in the vicinity, which saved his Teague Custom Marine-powered 28-foot DCB V-bottom—possibly even the lives of him and his friend, Craig. Bob Mathers, a Boyne City, Mich, resident involved with the event, informed me of the incident and he and I agreed that it could be a positive story highlighting poker run safety.

I wasn’t sure if Coelho would agree, but I asked anyway. “Lawrence, I heard about your mishap,” I said. “How’s the boat? Would you be willing to talk about what happened? Because I think it could be a good story that people can either relate to or learn from?”

Coelho responded with an immediate “of course.”

“I think a lot of people putting on poker runs could learn a thing or two from Boyne,” Coelho said. “Those guys do a fantastic job. The guy who towed us in was a gentleman and a half. if it wasn’t for him, we would have sunk the boat.”

After leaving the event’s second card stop in Northport, Mich., Coelho said he blew a hole in the gimbal of his IMCO Marine SCX drive, which caused his boat to start taking on water. Wally Trine of St. Clair, Mich., was one of the boats patrolling that portion of the course at that time and he and his fiancé, Debi Brusatori, sprung into action from less than a third of a mile away once they saw Coelho’s boat come off plane and open the engine hatch. 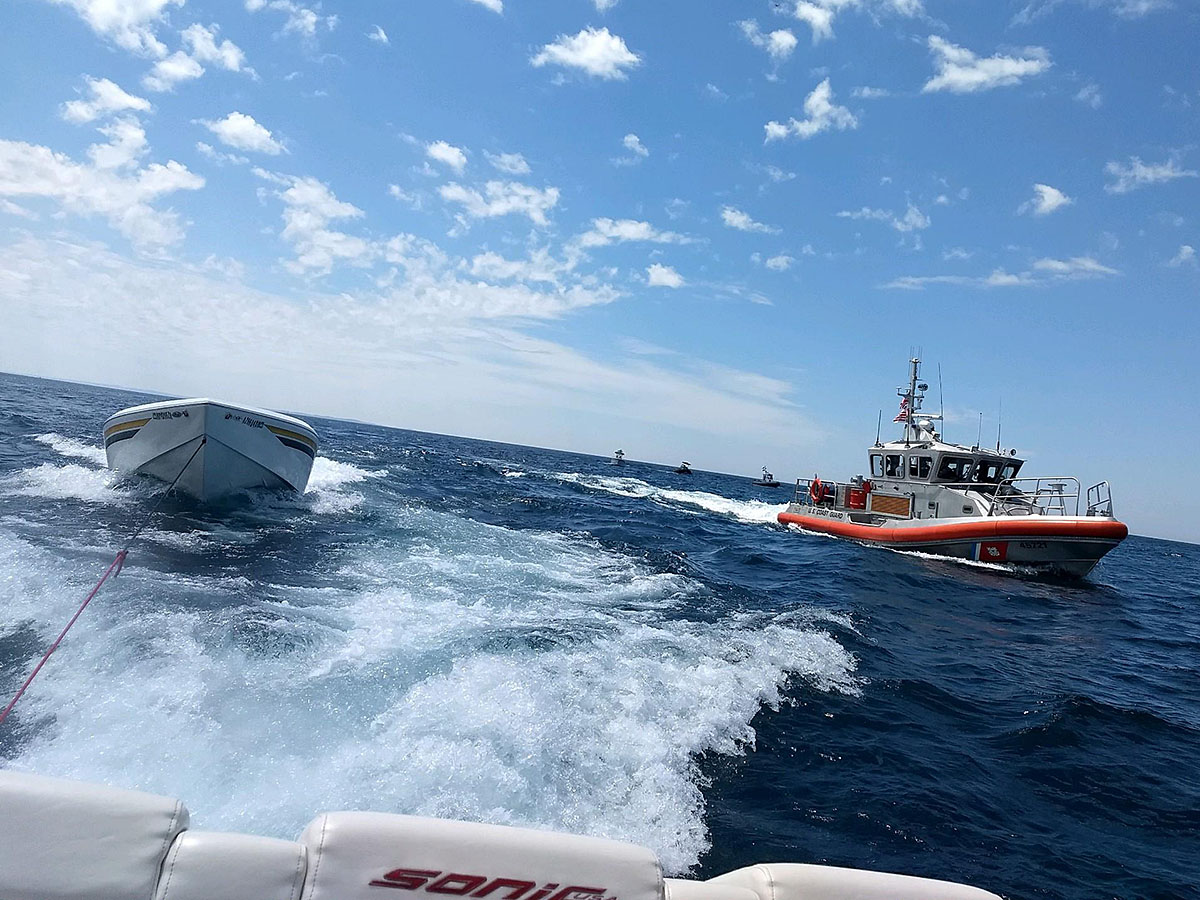 Debi Brusatori took this image of Coelho’s boat under tow and under the watchful eye of several on-water authorities.

“It ended up being more excitement than we anticipated for the day,” said Trine who owns a Sonic Boats 31SS powered by twin MerCruiser 496 Mag HO engines. “As we approached the boat, we came off plane and one of the guys waved us in emphatically so we knew they were in trouble. He already had a line tied to the bow so he threw that to us and I tied it to our line with a square knot and then started to tie my line to our flush-mount cleat. He waved me off and pointed to the back of the boat, which I expected meant it was going to be quite a load.

“I guess his bilge pump wasn’t keeping up,” he continued. “We found an ideal speed around 1,800 rpm and tried to keep it in that sweet spot. We’re not professionals at this, we just try to use common logic and not panic. It all happened very quickly and we needed to make sure it didn’t take both of our boats down.”

Trine, who has provided his boat for poker run patrol for almost a decade, said that this was his first time having to tow a boat in that was sinking.

“After a couple of VHF radio attempts and a 9-1-1 call, we were able to reach and stay in touch with the U.S. Coast Guard, and they headed our way to assist,” Trine said. “First the Coast Guard helicopter showed up and then a couple of patrol boats followed by a Department of Natural Resources boat and the Charlevoix County Sheriff’s Office. I was impressed with the response and the communication from all of the law enforcement, not to mention the skills of the woman captaining the larger Coast Guard boat. It was unbelievable how well she could maneuver the boat.”

Once they got to the channel leading from Lake Michigan to Lake Charlevoix, Trine figured that the Coast Guard would take over the tow, but instead they provided a “faster than no wake zone speed” escort through the poker run and spectator boat traffic in the channel and on Round Lake.

Wally Trine and Debi Brusatori own this 31-foot Sonic that Pete Boden captured during the 2014 Boyne Thunder Poker Run.

“Wally really did save the boat—he did a good job towing it,” Coelho said. “He kept everything level and was very patient. He was our ace in the hole; I’ll be calling to thank him once I get on the road to the 1000 Islands Charity Poker Run in New York. We had parts shipped overnight from IMCO, and since we didn’t lost the drive, we should have it back together and in the water for the 1000 Islands run this week.”

As I wrapped up this column on Wednesday evening, Coelho sent me a text saying his friend Tyler Crockett of Crockett Marine Engines in Clyde, Mich., re-installed the drive with its new gimbal as well as a larger bilge pump at Coelho’s request. So if you happen to see Coelho in New York this weekend, rub his beard for a little good luck.

Kidding aside, please try to thank the volunteers who patrol the course at whatever event you’re at next. They are a pretty special—and important—group of people. I will do the same at the West Michigan Offshore Rock The Coast event this weekend. Speaking of that, it’s time to pack.