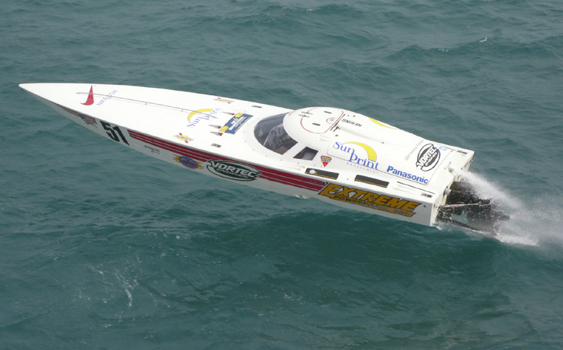 Back in the race! Gary DeCiuicies and Steve Miklos rejoined forces to hit the offshore circuit again in 2007.

It was 2003 when Gary DeCiuicies and Steve Miklos captured the ultimate racing credential by scoring a perfect season in Factory I Class. Their weapon of choice: a 29’ Extreme outfitted with a single 575-hp Innovation/GM Powertrain Vortec that posted some amazing stats for this Extreme Vortec team.

“We won every race, set a kilo record and took the World Championships on the same set of spark plugs…[and]never had a drive failure,” owner Steve Miklos told me. “It was good stuff.”

It was an extreme year of highs and lows that concluded at the final event, the World Championships in Orange Beach, Alabama.  The offshore culture can be as rough as the seas and at that point, they were just concentrating on winning the World’s.

“I knew when I was stepping out of the boat, that I was going to quit racing. The politics had become pretty overwhelming and it was time,” Miklos recalled. “The boat [Imco] that came in second on the first day of racing broke during testing. So the last race, we were just covering them in order to beat them and win the World’s. Then I got the word, you got two laps to go, if you can get the boat [High Noon] ahead of you…you’ll score a perfect season. We did just that, winning  every race.” 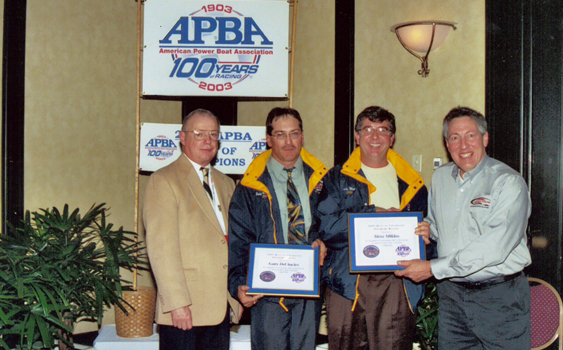 While it was an impressive accomplishment for the veteran racers from Florida, both are quick to say their season of garnering checkered flags wasn’t as difficult in comparison to others in this exclusive club for a couple of reasons, including the Innovation-built Vortec engines leased through GM.

“Factory I and II Classes were actually a remake, with some tweaking, of the Sportsman A and Sportsman B rules developed by John Kenyon,” Miklos explained.  “The Factory Classes were really A and B boats, only with a sealed motor. So it was effortless for us to accomplish what we did…we didn’t have all the complexities that John [Tomlinson] and Laith [Pharaon] had to deal with. In no way is this on the same level as their accomplishment.”

Driver Gary DeCiuicies credits consistency. “We knew most of the races that year and we knew each other’s reaction to situations. That made a big difference and that’s what it came down to. We had everything working right for us that season.”

When the season ended, Miklos sold his boat and “worked a lot harder at my business. I was pleasure boating, but just missed the racing.”

Time changes everything and a new program sanctioned by Super Boat International (SBI) grabbed Miklos’ attention. “SBI had a good Florida series going. It reminded me of the really good divisional circuit started by the Offshore Power Boat Racing Association (OPBRA) many years ago, when I started racing Sportsman B Class in the 1990s. Those were well done divisional events.”

The longer he looked at the format, the better racing looked. So he rebought his boat and reassembled a  once perfect team, even bringing back their former high school teacher and his former business partner, Ernie Pollock, as Team Manager. “SBI had good affordable rules and it got me interested in boat racing again.” To date, DeCiuicies and Miklos have made the charts as 2006 National and World Champions and boast the fastest lap speed (82.7 mph) at the Key West World Championships for Super Vee Limited (2010). 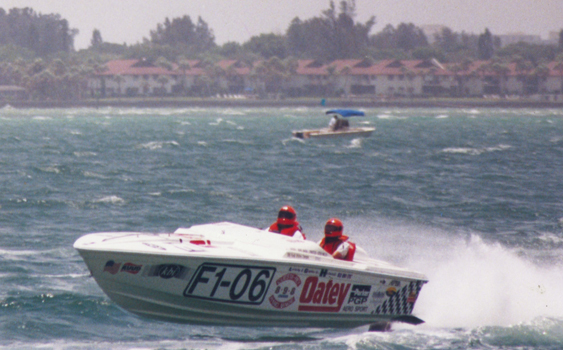 DeCiuicies and Miklos scored a Perfect Season in 2003 aboard Extreme Vortec.

Fast forward to Miklos’ new boat, Sun Print Management/Extreme Vortec, slated to debut at the Sarasota race in July. “From the rub-rail down the new hull, built by Mark States, is identical to the old boat. However, the top has a new deck that’s been optimized for high speeds the boats are running now. It’s a natural evolution of the boat that we’ve been racing… it’s a stronger, stiffer boat.  As we got older, we needed to add some comforts like suspension seats, A/C.  Of course, we’re still running the Innovation engines. We didn’t change that much, we liked the package we had and like the people we have worked with all these years.”

NOTE: I love it when I get feedback. It’s a welcomed learning experience, especially coming from racers that I’ve followed over the years. So when I got an email from Steve Miklos regarding my Perfect Season story, I called him up and said, “let me set the record – your record – straight.”  Thanks for reaching out!