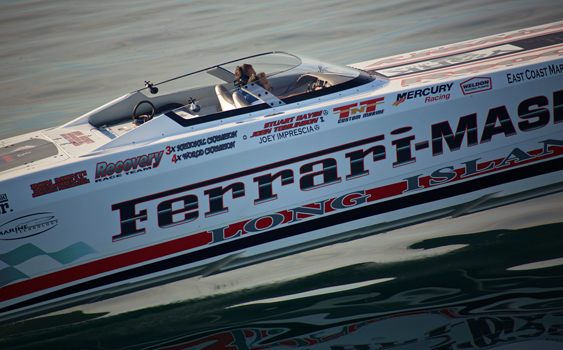 Hayim and Tomlinson in their 42′ MTI. (Photo courtesy of Devin Pickering/thinkFast Films.)

“It was a great two hours. I think it took longer to fuel the boat yesterday at the Shell station than it took to go around Long Island today,” multi-titled offshore racer Stuart Hayim laughed.

Stepping out of retirement to attempt a powerful personal and racing mission, Stuart Hayim returned to his winning ways with an amazing record-breaking run around Long Island today. Hayim joined forces with throttle ace John Tomlinson aboard a 42’ MTI open cockpit catamaran outfitted with twin 1350 hp Mercury Racing engines for a stunning performance that wrote an impressive record in the offshore history books: two hours and eleven minutes! 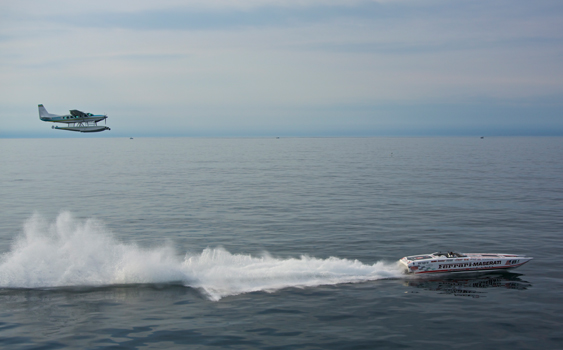 “I couldn’t have ordered a better day, a swimming pool would have been rough.” (Photo courtesy of Devin Pickering/thinkFast Films.)

As Hayim and Tomlinson headed out, they made their way clockwise around Long Island Sound under picture perfect conditions. “I couldn’t have ordered a better day, a swimming pool would have been rough,” Hayim said. “We were talking, laughing until we got to the ocean. It wasn’t the biggest waves, but it was sloppy with two to three footers, very unpredictable. If I had known it was like this out there when we started, I could have put five to six minutes in my pocket on the Sound side.”

Despite the confusing open waters, Tomlinson stayed the course with his carefully executed game plan. “Inside it was flat calm water,” he said. “We were cruising around 130 to 135 mph, then we hit the ocean and it got sloppy even though there was no wind. We slowed down to 115 to 120 mph, occasionally 95 to 110 mph…Either step it up or pull back depending on the beach side conditions. When I saw the Verrazano Bridge, I knew we were home free. My goal all along was to run about 125 mph average.”

The pair delivered an amazing finish through the city as they powered along the East River, ultimately making their way to LaMotta’s Restaurant in Manhasset Bay Marina  for a brief celebration. “There was a fireboat blasting water in the air and a checkered flag waving as they crossed the finish line [at Buoy #27],” said Billy Frenz of the National Powerboat Association. “It was above and beyond.” 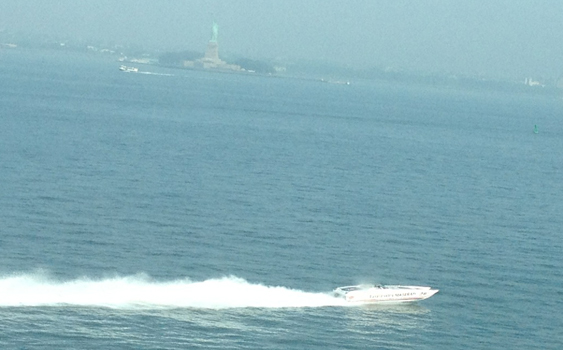 With the Statue of Liberty in the background, Hayim is on his way into the record books. (Photo by John-Martin Vogel.)

This new record fueled old memories of a past accomplishment listed in Stuart Hayim’s stellar racing resume. “The fun part is the original record that I broke in 1989 was held by a then 21 year-old Fred Kiekhaefer and Bill Sirois, who set the record back in 1968,” Hayim recalled. “It took me 3 boats, 3 years and countless dollars to finally break their record. Joey Imprescia and I finally made it in 3 hours, 6 minutes in a 32’ Skater.”

While Joe Cibellis and Joe Sgro set a record of  3 hours, 5 minutes when they powered a 43’ Outerlimits around Long Island last September, today’s stats reverberated throughout the industry. During an afternoon interview, those impressive numbers laid down by Hayim and Tomlinson had former record-holder Fred Kiekhaefer celebrating and reminiscing. “I have a big smile on my face,” Kiekhaefer told me. “A smile is a great performance metric. My first race with Bill [Sirois] was around Long Island. The record stood for 20 years until Stuart took it with a 3 hour, 6 minute run. It’s his again with two hours and eleven minutes. With the current generation of Mercury Racing engines and drives, we have stepped up the game in a big way. We’re pleased Stuart and John could harness our monsters to recapture a Long Island record.”

Interviewing Hayim a few weeks ago, it was obvious his dual-purposed mission had reignited the same driving force that landed this cancer survivor behind the wheel of several high performance racing machines during the 1990s. “I’m trying to use this as a means to raise money for the same hospital, the Don Monti Cancer Center, where I was treated for cancer many years ago. Mrs. Monti visited me while I was there and told me ‘I lost my son to cancer, I’m not going to lose you.’” 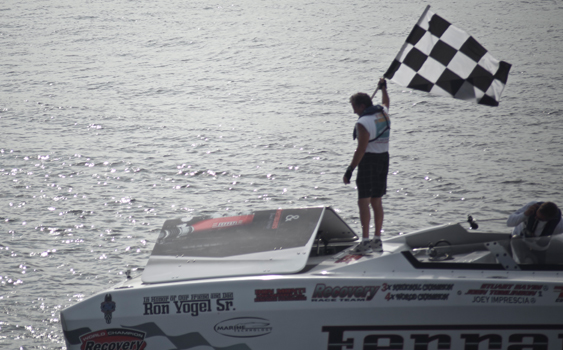 This was the same winning combination that fans experienced when Stuart Hayim dominated the offshore racing arena with his Recovery philosophy: win races, raise money for cancer research, and inspire those fighting the disease. So early on this summer morning, his race for a new record became a reality. “The last five or ten miles, I said, ‘Thank you God for laying the water down so we can make some speed. We went under the 59th Street Bridge at 149 mph. As we crossed the finish line, I had real chills and goose bumps. There are no losers here, only winners.” Spoken like a true champion!

Donations in support of Stuart’s record-breaking run to beat cancer can be made at: www.breakingrecords.org