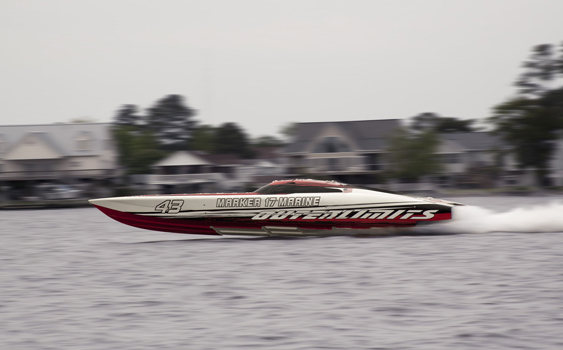 Now that Outerlimits has two V-bottom kilo-records under its belt, the Bristol, R.I., custom high-performance boat builder can kick back and watch the orders roll in. That’s how it works, right? Big speed means big sales. After all, isn’t that what Reggie Fountain of Fountain Powerboats did back in the day?

Despite the commonly held notion that “speed sells performance boats,” it is, in fact, just a notion and not one that everyone—most notably Outerlimits Powerboats founder and owner Mike Fiore—buys into. The Reggie Fountain faithful, from current owners to former dealers, will argue otherwise but the truth is a speed record, in and of itself, sells nothing.

I can almost hear the exasperated spluttering and coughing out there.

But take a breath and consider this: Yes, Fountain touted itself for years as the “fastest, safest, best-handling” brand of V-bottom in the world and in its heyday the Washington, N.C., company sold hundreds of units. And yes, speed and offshore powerboat racing victories were giant parts of the Fountain image. Yet to focus on those two elements misses the most important word—touted— above.

When it came to advertising and marketing, under company founder Reggie Fountain, the go-fast boat maker spent money like he was angry at it. Fountain ads were everywhere from Powerboat magazine to Boating magazine. Reggie Fountain was not shy about expressing his Golden Rule—“The man with the gold makes the rules”—and that rule involved spending freely and leveraging those dollars spent to get his message across.

Don’t get me wrong: Speed obviously matters in the go-fast boat world and speed was a huge part of the Fountain-under-Reggie marketing message. And Fountain powerboats were fast. But it was the relentlessness of the message that made it stick rather than the “mile per dollar per hour” message, as Mr. Fountain liked to put it, that translated to sales.

Fountain’s approach to advertising and marketing was as subtle and nuanced as a jackhammer shattering concrete. When it came to advertising, Fountain’s true “genius” was in knowing how widespread repetition helps engrain a message, a company name and an image in the mind of prospective buyers.

When I left Washington, N.C., in late April, Mike Fiore and the rest of the Outerlimits team were feeling grand about their kilo-run accomplishments. They enjoyed proving that they currently build the fastest V-bottom on the market. But they have no illusions—and I’m talking zero—that their new record will significantly boost sales.

“We did it because we knew we could and because we have wanted to reclaim the ‘world’s fastest V-bottom’ title for 10 years,” said Fiore. “But will that alone sell extra boats? No. It takes more than that—performance is more than speed.

“Speed records give people something to talk about and, yes, it’s great they’ll be talking about Outerlimits for a while,” he added.

“But will two kilo records sell more boats? We really don’t think so, and that’s not why we did it.”