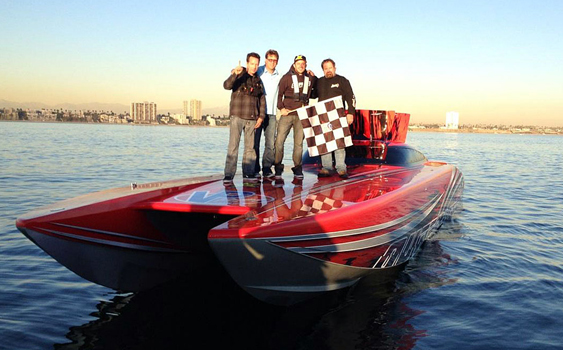 If endurance record runs—like the one tackled yesterday by Bob Russell and John Rogers from San Francisco to Long Beach, Calif., in Russell’s 51-foot Outerlimits Powerboats catamaran—were uncomplicated and stress-free, surely we’d see a lot more attempts being made.

But they’re not. Ask Russell, Stuart Hayim (the owner of the 42-foot Marine Technology Inc. catamaran who set the Round Long Island record in August of 2012), Bob Barnhart (who broke the Key West, Fla., to Cancun, Mexico, record in his diesel-powered 50-foot Nor-Tech V-bottom), or the four-man crew that established the Lucas Oil Ocean Cup – Golden Gate to Queen Mary record two months ago in a diesel-powered 48-foot APISA Sports Yacht V-bottom. 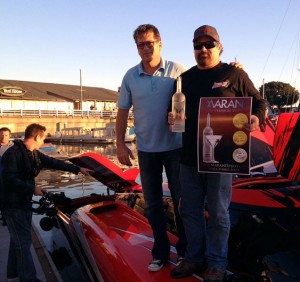 From the docks in front of the Yard House in Long Beach, Russell and Rogers vowed to attempt the record again. (Photo by Mike Quindazzi.)

In fact, try any other competitor who has ever attempted a record run of any significant distance. It ain’t easy—the story usually has to do with what went wrong or didn’t go wrong. Still, even if a record isn’t broken, the sense of accomplishment is rewarding.

After completing the Marani Bell record run in 8 hours, 15 minutes and 5 seconds—some three-plus hours off the time they were predicting—Russell was still excited about making it to the finish in front of the iconic Queen Mary just before sunset. Powered by a pair of Sterling Performance engines producing 1,150 horsepower on pump gas, the 51-foot Outlaw Offshore Racing canopied cat and its new props from Hering Propellers made it through the 430-plus-mile run in one piece, which is the best you can hope for really.

“I’m glad we did it even if everything didn’t go perfectly,” said Russell, who initially planned to set the Marani Cup record from San Francisco to Los Angeles (with a stop in Marina del Rey before heading on to Long Beach), but opted to run straight to Long Beach after spending a few hours dealing with fuel pump transfer issues. “We still broke the record to the Queen Mary, and needless to say we plan on doing it again. If the weather is OK we may go after it in the next four to six weeks.

“Honestly the only mechanical issues we had were the problems with the fuel pumps that transfer fuel, otherwise everything else went well,” the experienced performance boater from Seattle continued. “After the first few hours we were on pace to crush the old record to L.A., but since we had to stop and mess with transferring fuel we probably lost three to four hours doing that. But, hey, we made it here, right?” 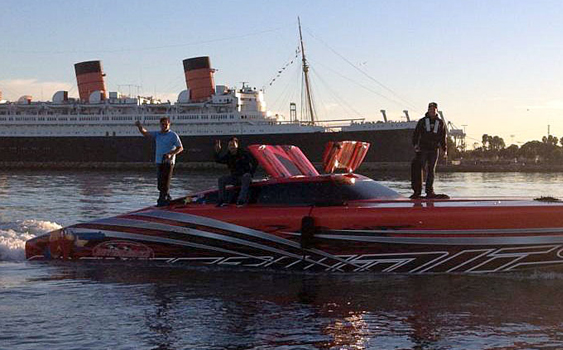 Powered by twin Sterling Performance engines, the catamaran finished the challenging run in front of the iconic Queen Mary in Long Beach. (Photo by Mike Quindazzi.)

The team, which included Russell on the throttles, Rogers at the wheel and two video crew members, Nic Ashby and Jimmy Lee Cook, monitoring from the rear seats, was on an excellent pace for the first couple of hours before encountering issues with the pumps transferring fuel from the 200-gallon reserve tank installed for the run.

Russell said they had to “MacGyver” some things together to be able to get the fuel out of both sides of the reserve tank. From there they got the fuel into one of the primary tanks and began the process of transferring fuel via five-gallon gas cans into the opposite tank. Russell estimated that he spent at least a few hours doing just that several times during the second half of the run, which is why he’s eager to attempt it again.

Even with a “good” weather window, the conditions were still challenging. Russell said they hit some 8- to 10-foot swells for a couple of long stretches during the first half of the run and had a good distance of 4- to 5-footers before it laid down a little for the second half of the run, which was sanctioned by the American Power Boat Association and produced by RPM Racing Enterprises.

The 51-foot Outerlimits enjoyed an overnight stay at the San Francisco Yacht Club before leaving on a 400-plus-mile run in the Pacific Ocean to Southern California. (Photo by Jeff Murray.)

What Russell, who plans to attempt other endurance record runs in the near future, and Rogers accomplished on Wednesday is no small feat. It’s a test of ability, equipment and whatever Mother Nature dishes out. Not to mention you need a hefty budget, especially in a point-to-point run like San Francisco to Long Beach. Factors such as preparing the boat, fueling it up, getting the run certified, taking care of a crew to assist in the attempt and so many others can rack up quite a bill.

Yet it’s that what-if, no-guarantee factor that makes it all worthwhile and keeps endurance record runs in such high regard.

“This is my first time doing a record run like this,” said Ross Wallach of RPM Racing. “Both the APBA and myself are excited about the idea of more teams gaining interest in the type of record runs Bob and John attempted today. They’re exciting, that’s for sure. The hope is that this run and the one the Lucas Oil team did a couple of months ago will spur on a little resurgence of sorts.”

Based on the buzz around the performance boat industry, that resurgence is a strong possibility—and not just in the Pacific Ocean.