You are at:Home»Shattered Records»On to the Next Record—A Guinness Record 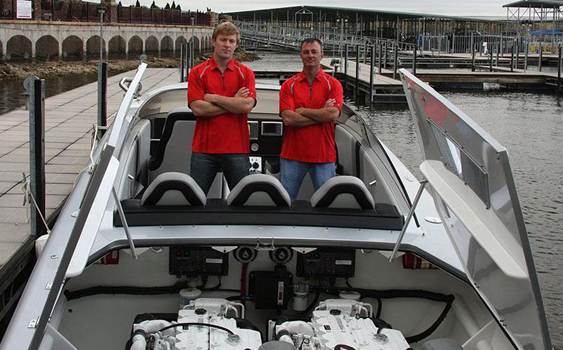 Before making the trek to Bermuda, Chris Fertig (left) and Tyson Garvin spent some time at Lake of the Ozarks in Missouri testing the Skater Powerboats 399 with twin 480-hp Cummins diesel engines.

Chris Fertig and Tyson Garvin aren’t wasting any time. According to Garvin, of Joplin, Mo., he and Fertig, of Virginia Beach, Va., are aiming to set a new Guinness World Record as soon as possible. Less than two weeks after driving their Skater Powerboats 399 V-bottom across the Atlantic Ocean, the two performance boat aficionados are looking to establish a record from Bermuda to the United States.

Surely most of you are familiar with the duo’s recent record-setting run from New York to Bermuda as part of Boating Magazine’s Bermuda Challenge. If not, let me briefly fill you in. The first two-time Bermuda Challenge record setters finished the 780-plus-mile endurance run in 15 hours and 48 minutes just after midnight on August 22. The feat was accomplished nearly a year after the two completed the run in a diesel-powered 37-foot Statement Marine center console in 21 hours and 39 minutes, a record that was broken two months later by legendary Italian boatbuilder Fabio Buzzi in 17 hours and 6 minutes. (For more, you can watch this video interview, check out the OSO thread or read Eric Colby’s preview he wrote a few months back.) 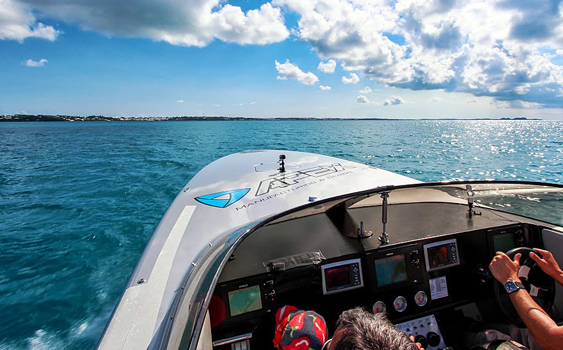 Although they didn’t shatter the record by as much as they wanted to, Garvin and Fertig succeeded in their latest Bermuda Challenge efforts.

According to Garvin, the carbon-fiber/Kevlar-built boat, which features twin 480-horsepower Cummins diesel engines connected to Arneson Industries ASD8 surface drives, is sitting in Bermuda waiting on a set of propellers. The problem is Garvin is still trying to find any that are big enough. You see, the run across the Atlantic devoured the teammates best props—a pair of massive 19” x 44” propellers from Precision Worx—early on in the trip yet they were still able to complete the dangerous crossing with a mismatched set of props (a 19”-diameter six-blade and a 17”-diameter five-blade) spinning the same direction.

Had the custom-built set not broken roughly 60 miles offshore from New York, Garvin believes the boat would have set a practically unbreakable record. He and Fertig also would have driven the boat right back and then hauled it all the way to Missouri to compete in the Lake of the Ozarks Shootout that weekend. Now that would have been something. 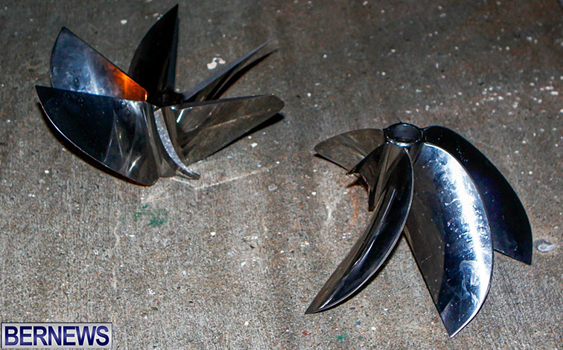 The team’s best propellers—a pair of massive 19” x 44” props from Precisionworx—each lost a blade early on in the trip across the Atlantic.

Instead, Garvin and Fertig will try to make the best of the situation of having to leave the boat in Bermuda and attempt to run the boat back to the U.S.—any point stateside will do as Guinness isn’t requiring a specific American destination.

“We were going to go this Friday or Saturday, but we still don’t have props,” said Garvin, adding that Guinness is introducing the record as a simple one-way “run-what-you-brung” Bermuda to United States voyage without any classification relating to boat size, engine size, etc. “The weather has actually been looking pretty good, but we’re not as worried about weather this time because we don’t really care about going too fast at this point—we just want to make it back.”

Garvin, who actually holds a Guinness World Record for fastest stand-up watercraft that he set in 1993 at 79.2 mph, said the Guinness submission was a no-brainer. 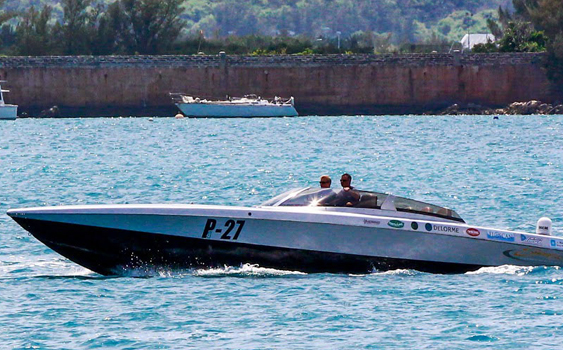 “The rule is that the boat will have to be touching land anywhere in Bermuda and end up anywhere in the U.S., tied up to a public dock,” Garvin said. “We’re going to shoot for the Outer Banks of North Carolina as it appears to be the closest on a map. Although at that kind of distance you don’t go in a straight line, you go on a curve because of the curve of the earth. The straightest shot is just a little north of the Outer Banks and, depending on current, wind, waves and all that stuff, you could end up at a different spot that might be 40 to 50 miles further but you might get there faster.

“So on the day we make the attempt, once we start we’ll see how fast the Gulf Stream is going because we might be better off going up the coast a little further instead of going against the current,” he continued. “Overall, we’re estimating the run to be around 150 miles shorter than [the Bermuda Challenge]. We actually covered more than 800 miles in our run from New York to Bermuda, even though it’s about 780 miles if you could do it in a straight line.”

Obviously Garvin and Fertig will keep everyone informed once the time is right to attempt the journey back to the States, and will of course have updates on their site, www.offshoreendurance.com. And while they have openly discussed attempting other endurance runs, such as Key West, Fla., to Cancun, Mexico, Garvin mentioned bigger things to come. The details are not being made public as much of them are still in the works, but he did tell me that they plan on building a massive boat to chase the longest endurance run possible—the around the world record.