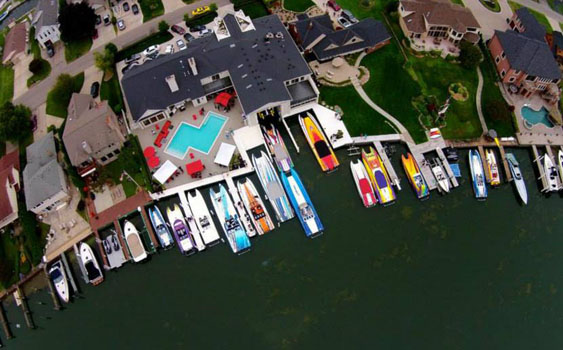 Ron Szolack’s waterfront home in Michigan is impressive—even more so with over a dozen Skater catamarans behind it. (Photo courtesy Chip Miller.)

It’s fitting that the host and founder of Skaterfest is the customer who’s probably bought and sold more Douglas Marine-built boats than anyone in the world. Michigan’s Ron Szolack, who currently owns the 46-foot Skater Tom Cat and a new 368 with twin 700-hp Mercury Racing engines, invited 20 of his closest performance-boating friends and their friends to his amazing waterfront home in Harrison Township last weekend for the fourth annual Skaterfest—and everyone had an unforgettable time.

Douglas Marine owner Peter Hledin and his wife, Marie, and son, Michael, attended the event, which Szolack (aka flight club here on OSO since he owns Flight Club, an upscale adult entertainment club in Detroit) started in 2011 to pay homage to the multitude of Skater models Hledin has built over the years. Skater’s national sales manager Tony Cutsuries and his girlfriend, Amy Davis, were on hand for their first Skaterfest as was Statement Marine founder Todd Werner. Talented photographer Jay Nichols (jayboat on OSO) hasn’t missed one yet and first-time participant and owner of two Marine Technology Inc. catamarans Kenny Armstrong, who knows a thing or two about hosting a party since he opens up his home every year for a party during the Texas Outlaw Challenge, enjoyed himself tremendously. 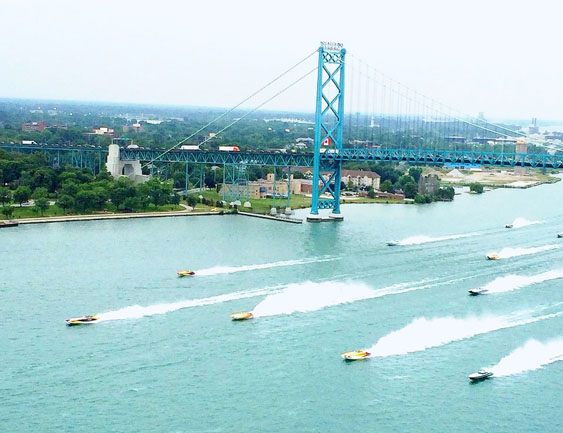 The fourth annual Skaterfest on Michigan’s Lake St. Clair was the biggest one yet. (Photo courtesy Ron Szolack.)

In fact, this year’s event on Lake St. Clair attracted more boats and participants than ever before, and included Skaters from 28 to 52 feet as well as the Cleveland Construction offshore race team’s new 38-foot Skater owned by Ed and Shawn Smith of Rivers Bend Marina in St. Clair.

Rather than put it into my own words, I’ll let some of the notable names in the poker run community who were on hand explain why Skaterfest is “like Candy Land for boaters,” as described by Tristan Collins, who goes by TriPaC87 on OSO and rode in Freedom, the 46-foot Skater owned by Jim Lee (US-1 FREEDOM on OSO). As you can and will see, many attendees are OSO members so that’s what the parenthesis are referring to moving forward.

Chip Miller (miller001), a third-generation performance boater/offshore racer who owns Miller Marina in St. Clair Shores, rode with Ken Fruehauf in his 46 Skater: “Hats off to Ronnie for another awesome weekend. We had a great turnout and even though it was cloudy and overcast for the main run Saturday, that actually worked to our advantage because it kept a lot of boat traffic off the lake. For the most part, we had the water to ourselves running 20 something Skaters around the lake so that was cool. This event is so laid back because it’s something Ronnie does for all of his boating buddies. He also does it for the love of the boat as well as Pete and his design and building expertise. It is Ronnie’s way of paying respect to the exceptional boat that the factory puts out.” 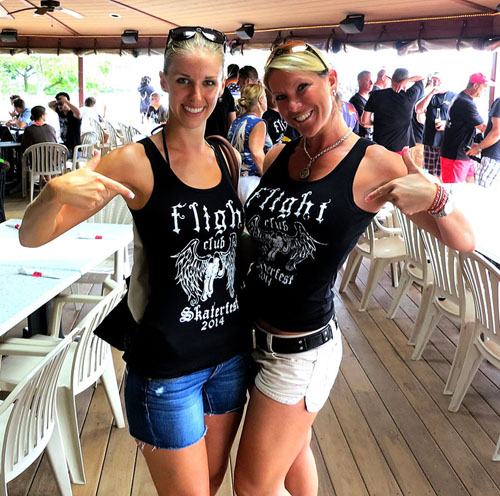 Yvonne Aleman, a South Florida performance-boat enthusiast who rode with her boyfriend, Greg Harris (Cash Bar), in Szolack’s stunning new orange and black 368, but also went 152 mph—the fastest she’s ever been—in Tom Cat: “I spent two solid years hearing about Skaterfest and am thrilled to have been warmly welcomed into this ‘boys club’ event. It’s truly a no-nonsense gathering of passionate Skater lovers. The camaraderie was outstanding and many participants were switching seats among boats to fully experience each other’s Skaters, which is something you don’t often see at mainstream performance boating events. Ron’s generosity and hospitality were impeccable and every aspect of the event was executed safely, skillfully and smoothly.”

Cutsuries, who also did the run in Fruehauf’s 1999 Skater with twin 1,050-hp Sterling Performance engines: “I think Ron eats, sleeps and breathes Skater, pretty much, so I can’t even begin to describe how big of an advocate he is of the product. It was nice to be able to deliver the 368—our first with twin 700s—to Ron at his event. We had such a great time at the event. It was nice that everything was in one spot and that everyone seemed to really enjoy themselves.”

Chris Mills (boat customs), who owns Boat Customs in Caledonia, Mich., participated in Skaterfest for the third-straight year in Lee’s other Skater, a recently repainted and updated 28 Skater with twin Mercury OptiMax 300XS outboards: “There was an even better turnout this year, which is probably because Ron moved the run from June into August. I love this event. It’s awesome just to hang out with a bunch of good people talking about boats, not about business—it’s just real relaxed.” 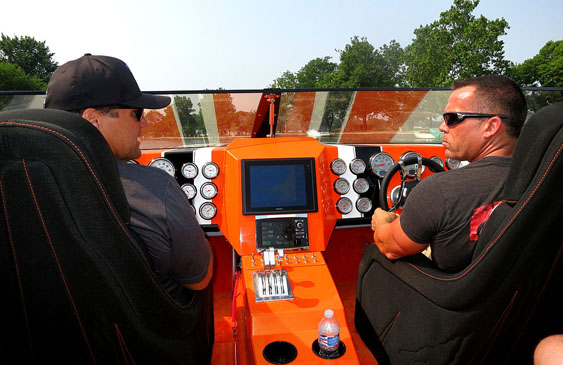 Vinnie Rifice (Vinny R), a New York boater and good friend of Szolack’s who has attended every Skaterfest, picked up his 32 Skater, which was recently repowered by Frank McComas of Scorpion Enterprises in Michigan, that week and completed the run with his buddy, Chris Ryder (ryder638), who also owns a 32 Skater: “The whole Skater camaraderie is awesome. It’s just a bunch of guys talking about their boats, the hulls, the motors and the setup on them. It’s just such a passionate group of boaters who like to talk about the stuff they love. And to go to Ronnie’s club is always a plus. It’s such a fun night.”

Bill Lemanske (bill63), of Grosse Ile, Mich., joined the fun in his 390 Sport center console from Nor-Tech Hi-Performance Boats that, along with an Outerlimits Offshore Powerboats V-bottom, was the only non-Skater to be part of the event: “I always feel a little funny about going since we’re one of the only ones without a Skater, but Ronnie so graciously invited us to come along so we went. We didn’t do the whole run since we can’t stay with the boats running 100 to 150 mph, but we met up them where they made their turn at the Detroit River, then we joined them as they were coming back from lunch to Ronnie’s house. It’s so cool to see 20 Skaters from 28 feet to 50 feet running on the lake like that.” 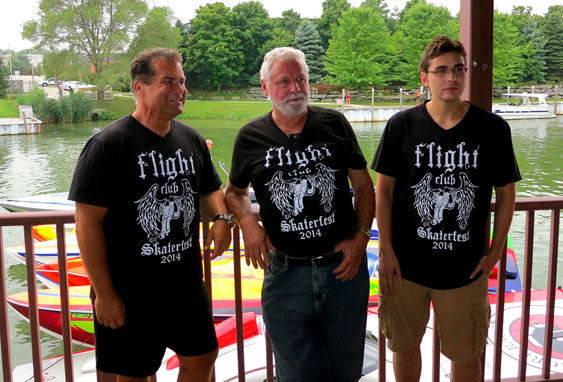 Last but not least, Hledin, who rode with Sterling’s Mike D’Anniballe in his 40-foot Skater All In: “We had a wonderful weekend. It’s always nice to see old ones, young ones, big ones and little ones (referring to the variety of boats he’s built). I’d have to say Ronnie is very close to the top as far as numbers of boats built, but he doesn’t hang on to them very long. He likes the build process as much as the running process. I’ve enjoyed working with him on every boat.”

Well said guys (and girls). For even more from the event, visit the General Discussion thread and check out Nichols’ photo gallery.

And let’s conclude with Szolack’s post right here on OSO: “I would like to thank everyone who came to Skaterfest this year. It was the biggest and best ever. At the end of the day, it’s all about great memories. I have the best friends in the country from coast to coast.”