You are at:Home»Street Party»And The Winner Is: That Dam Street Party 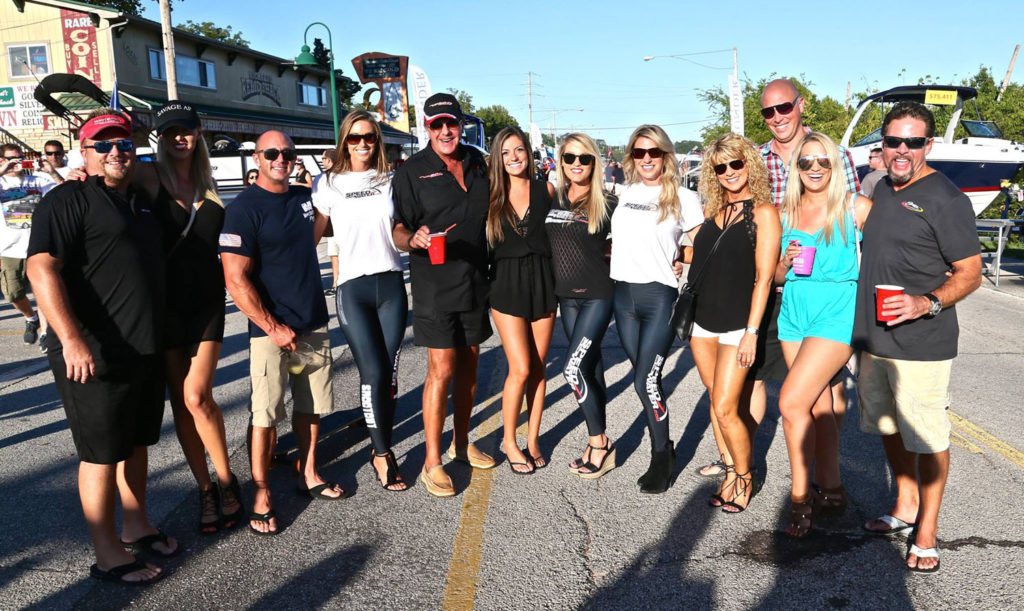 Covering the Desert Storm Poker Run, the Boyne Thunder Poker Run and the Lake of the Ozarks Shootout—OK, well, my fellow columnist Jason Johnson and I are just getting started on that one—I’ve had the great fortune of attending the three street parties that lead off each of these first-rate events. Each street party not only celebrates the finest go-fast boating hardware on the planet but also the three small towns—Lake Havasu City, Ariz., Boyne City, Mich., and Lake Ozarks, Mo.—that host them. Beyond an evening diversion for the participants, they exist to thank and show appreciation for the local townspeople and businesses that support the events.

Take nothing away from the Desert Storm and Boyne Thunder happenings, they were excellent. But last night’s Shootout On The Strip Meet and Greet powerboat display on Bagnell Dam Boulevard knocked me out me in a way no such event ever has before or likely ever will again.

What was so impressive about the Shootout On The Strip? A better question would be: What wasn’t?

Let’s start with something basic but essential to the success of any event like this: the volunteer staff. Hospitable and helpful doesn’t even begin to describe these people. As soon as I got out of my car and started walking toward the displays, a young woman and her little brother practically begged me to get into their golf cart shuttle and give me a ride—all of 200 yards—to the party. And at least four of those green-shirted volunteers thanked me on my way out. A local cop directing traffic even asked me if I had a good time.

By 8 p.m., the boat-flanked street was filled with luminaries from the go-fast boating world. I don’t want to name drop—sure I do—but at one point when I turned my head in one direction I saw Windship impresario John Woodruff and his friend/Skater collector Jim Lee and the Skater Powerboats posse of Peter Hledin, Tony Cutsuries, Tyson Garvin and Tristan Collins-Garvin. When I looked the other way, I spotted the DCB crew of Jeff Johnson, Tony Chiaramonte, Carlton Bass and Mark Schouten. Straight out of Tennessee and shooting the breeze in front of our speedonthewater.com promotional trailer were Chad Collier, Mark Godsey, Mike and Angela Goldbaugh and Justin Lucas.

And those were just some of the folks from out of town. The local Performance Boat Center crew of Brett Manire, Mark Waddington, Myrick Coil and a host of other PBC team members were out in force in front of their display, which included the new Wright Performance Powerboats 360 catamaran and the Performance Boat Center/Jimmy John’s Skater 388 catamaran, the defending 2016 Superboat-class world champion. 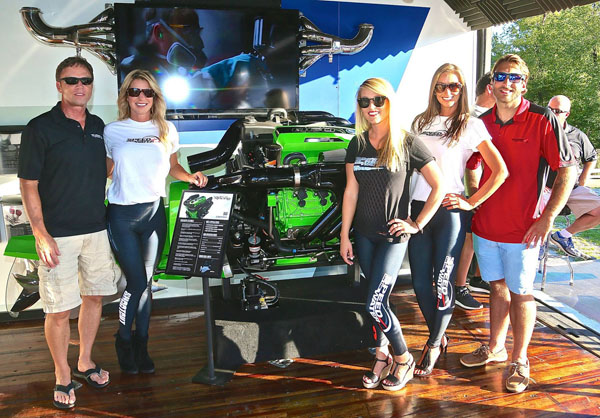 Mercury Racing’s Scott Reichow made more than a few friends in the company’s mobile marketing trailer.

While I’m on the subject of raceboats: If you ever doubted that the Lake of the Ozarks area has become a legitimate hotbed for offshore racing you needed to walk Bagnell Dam Boulevard last night. From Rusty Rahm’s 2016 Unlimited-class World Championship-winning 48-foot MTI catamaran to the new CR Racing Stock-class 32-foot Doug Wright to the HP Mafia Skater to Performance Boat Center’s previously mentioned 38-footer, raceboats were out in force and on display.

Representing the actual Shootout itself, which starts in two days, was the 51-foot American Ethanol Mystic catamaran, last year’s Top Gun and the odds-on favorite to reclaim that title this year.

To find a more impressive collection of racing hardware, you’d actually have to go to a race.

On the flip side, to see a comparable collection of high-performance pleasure catamarans, V-bottoms and center consoles you’d have to go the Miami International Boat Show. From the first of the new generation of Pure Platinum series Skater 388 cats—currently owned by Louisiana’s Michael Pierce—to Gino Gargiulo’s Lamborghini Aventador 52-foot MTI, the number of instantly recognizable custom creations lining both sides of the street was unprecedented. On the center console side, you had the latest and greatest from MTI, Mystic, Statement and Sunsation.

Tying it all together with a solid wall of sound was the Waves and Wheels/Bluave Marine Audio display, which as luck would have it was right across the street from our trailer. The title sponsor of the Shootout On The Strip, Waves and Wheels had a DJ pumping out music synced through Bluave audio systems in several boats next to another. (The music also was synced to the Waves and Wheels speaker in our trailer.) Justin Wagner and company at Waves and Wheels kept the music pumping, which could be heard from one end of the boulevard to the other, throughout the event.

All of that and so much more took massive amounts of planning and coordination. But what the Shootout On The Strip organizers couldn’t have planned for—what no one can ever plan for—was the weather. Low-humidity, 70- to 75-degree evenings in Central Missouri are less common than unicorns, but that’s exactly what the weather gods delivered yesterday.

We started this morning with a speedonthewater.com/Speedboat magazine photo shoot. Tonight, Johnson and I will head to the annual Lake of the Ozarks Shootout bash at Performance Boat Center. Come Friday, things really get rolling at Super Cat Fest at the Camden On The Lake Resort. And come Saturday and Sunday, we have the top-speed contest itself, and we’ll bring you all the action from that.

But I’m not sure any of it will top last night’s epic event. The dam bar has been set, and it’s delightfully high.