You are at:Home»Teams»Casey & Rob’s Big Adventure 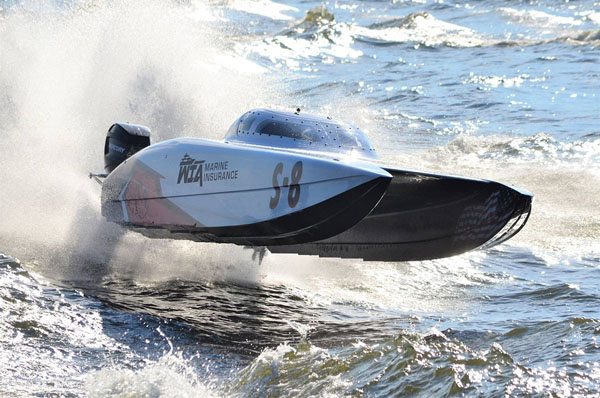 Even if first-year offshore racers Casey Boaz and Rob Unnerstall don’t prevail at the upcoming Super Boat International National Championships in Clearwater, Fla., or come home with a Superboat Stock-class title from SBI’s Key West Offshore World Championships in November, the owners of the CR Racing 32-foot Doug Wright catamaran are going to be extremely pleased following their rookie season.

First of all, the teammates won their very first SBI race—the Cleveland Construction Grand Prix on Lake Erie in Mentor, Ohio (read Matt Trulio’s column about the race)—and they finished third a few weeks later in Michigan City, Ind. Second, Boaz and Unnerstall had an incredible time with their sons—Jesse and Nick, respectively—and the rest of their family and friends during the recent Lake of the Ozarks Shootout in Central Missouri. 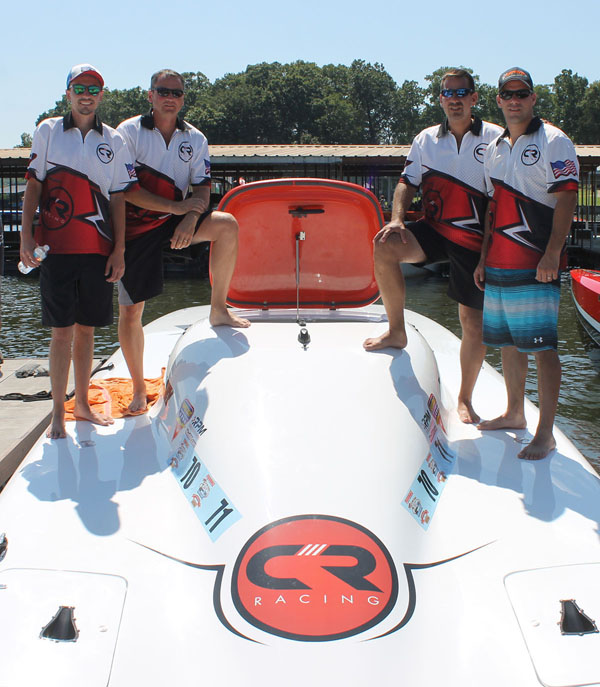 Jesse and Casey Boaz (from left) and Rob and Nick Unnerstall, enjoyed a ton of father-son bonding time during the Shootout. Photo by Jason Johnson

“We had such a fun time at the Lake of the Ozarks Shootout—we expected that because it’s a hometown event, but I think it exceeded all of our expectations,” said Boaz, the team’s throttleman who calls Osage Beach, Mo., home. “My son, Jesse, and I had a great time running down the Shootout course. The 119-mph top speed we reached was the fastest the boat had ever been since we weren’t running a normal race setup. Jesse and I also ran it home on Saturday with the rush of boats leaving the Shootout. He told me that was the coolest thing he’d ever done. It was like being in an ocean race.”

As you can see from the photo shot by Tristan Collins-Garvin, the Boaz tandem had its hands full but was definitely in the right boat to conquer the massive whitewash encountered early Saturday evening.

“We were probably running 45 mph in that photo,” Boaz said, referring to the image that looks like the boat is racing offshore. “We couldn’t go much faster than that.” 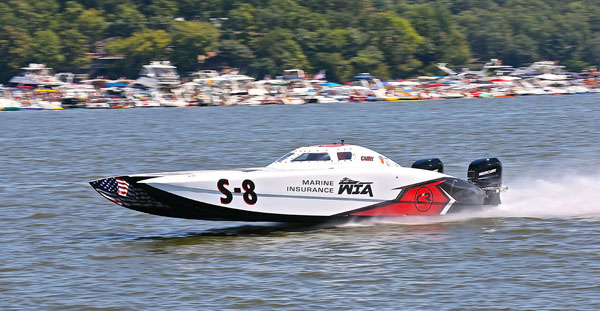 Boaz thanked the entire CR Racing support system as well as fellow competitors for an amazing week at the lake. Looking ahead, Boaz said the team started testing for Clearwater last weekend.

“We’re excited about the race in Clearwater at the end of the month,” Boaz said. “We expect the racing to be competitive—that’s why we wanted to race in this class. I think we’ll have a couple of other teams show up in Clearwater and Key West, which should make those races even more fun.”

Boaz and Unnerstall are sure to have more fun than they can imagine in Key West, but they’re also taking a focused approach into their first extensive three-race week of competition in the Southernmost Point in the United States.

“Key West is as good as it gets; it’s an offshore racer’s dream to compete there,” Boaz said. “We can’t wait to experience it, but we’re not looking past Clearwater either.”