You are at:Home»Teams»Disappointing Finish for Phantom 9 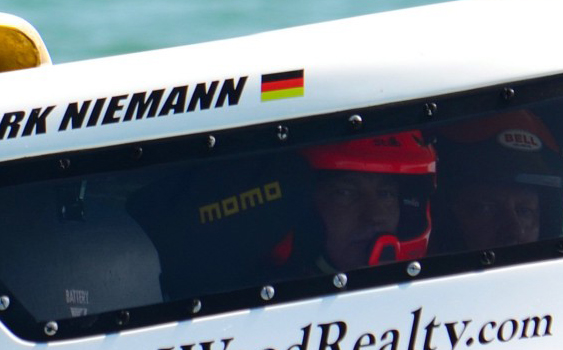 Mark Niemann and Kurt Jagel in Sarasota in 2012. (Photo by Lucididee Fast Boats.)

As the circuit moved to Mark Niemann’s hometown venue of Sarasota last July, the team strategy was to deliver family, friends, fans and sponsors a high-powered performance at the Suncoast Offshore Grand Prix. They were running strong with a 10-second lead over their class competitors and then, according to Niemann, “everything changed in a split second.” Their 30’ Phantom Speedster sliced along a series of waves, launched, went upside down and crashed into the water on its left side. While the dramatic accident left pieces of the boat strewn over the course, both Niemann and Jagel sustained only minor injuries.

When I interviewed Niemann and Jagel a few weeks later, they were focused on rebuilding the boat and getting back into competition even though their points race for a national championship was over for the season. The goal as Niemann explained was to “try a practice session at Clearwater before opting for World Championships in Key West or [the then scheduled]Qatar Cup.”

If records can be set in the rebuild category, then Phantom 9 Racing has its name listed in a chapter of the offshore history books. “The boat was completely rebuilt here at my shop,” Niemann explained. “The entire deck took five weeks, then rigging and rebuilding the engines took another two-and-a-half weeks. With all the support from our fans, we put it together for Clearwater.” 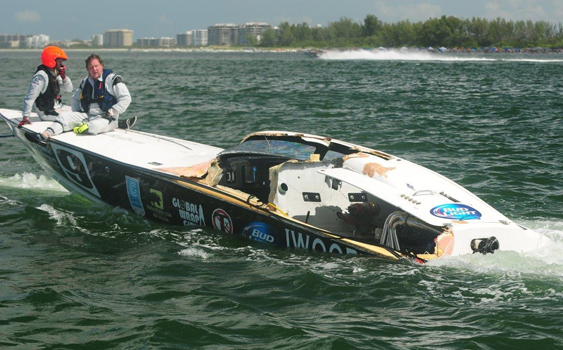 On schedule, the team pulled into the Florida west coast venue with a race-ready attitude. “We wanted to do Clearwater,” Jagel said. “Mark wanted to show the world what we could do.” Unfortunately, the Phantom 9 success story was short lived when Niemann and Jagel hit the waters and blew an engine during testing. “It was absolutely heartbreaking. For Mark and I to come back after what we went through, then have the opportunity to be back and run Clearwater and then break down before the race was absolutely heartbreaking.”

Following the pre-race mishap and a few weeks away from the Key West World Championship, frustration levels were running high as Niemann tried to resolve the engine malfunction issues. “We still can’t figure out what caused us to melt these two pistons. We’ve talked to lots of people and they can’t figure it out. What are we missing here?”

While pushing forward to dyno test the engine, the team sustained another setback last Friday when Niemann learned their main sponsor pulled out of a commitment for Key West. “We were really, really disappointed.”

Although their racing plans delivered a disappointing finish, they’re in sync with a philosophical strategy and turned the page of their 2013 season playbook. “Since the crash in July, since Clearwater, we’ve been limping behind the game. I’m used to being ahead of the game and in control of everything,” Niemann told me. “This is the right moment to give it a break.”

Jagel added, “But now, we’ll take the winter off and come back strong next year.”

Niemann says next year’s SBI schedule looks promising and efforts to re-enter the Superboat Vee lineup is in the works. “It could be a really good season, with the venue set-up and teams racing.” For now, it looks like they’ll join the spectator side of Key West racing next week with a two-fold plan: de-stress and size up the class competition. “I go out there to be competitive and to win.” Game On 2014.