You are at:Home»Thoughts»Commentary: Is Fort Lauderdale The New Miami? 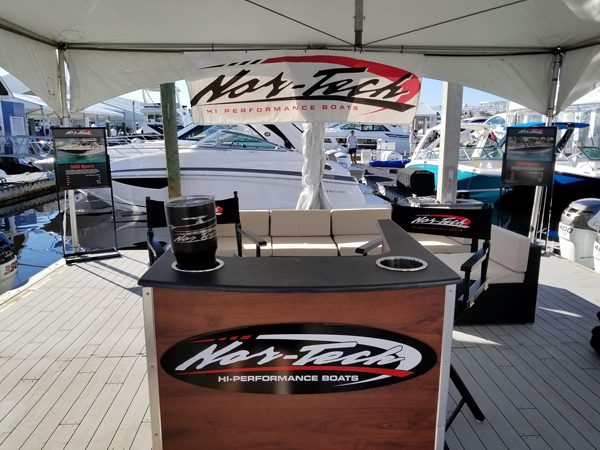 To address the question posed in the headline of this commentary, the simple answer is “no.” The Miami International Boat Show remains the most important exhibition event for the entire high performance marine industry. On scale alone, the annual Miami happening at historic Miami Marine Stadium on Virginia Key makes the Fort Lauderdale International Boat Show look miniscule when it comes to high-performance powerboats, engines and accessories displayed.

And then there is the perception that comes when a go-fast boat builder passes on the Miami show.

“If you don’t make it to Miami, everybody wonders what happened to you,” said Tony Cutsuries, the national sales manager for Skater Powerboats in Douglas, Mich. “Everyone wonders if you’re still in business.”

But business is, in fact, business, and here’s the thing I hear again and again from go-fast catamaran and V-bottom builders: They don’t do much of it at the Miami show. They know they need to be there because attendance is the largest—by far—of any boat show in the United States and because, as Cutsuries pointed out, while perception is not in fact reality (that’s a silly cliché at best) it does matter.

But by their very nature, huge crowds at consumer product shows, from automotive to electronic to marine, include an overwhelming percentage of folks who have zero intention of buying anything other than beer and overpriced lunches. They come to window-shop and they come to be entertained—and there’s nothing at all wrong with either of those leisure pursuits.

Yet neither produces powerboat sales.

So when I hear reports from Brett Manire of Performance Boat Center, which had Cigarette, Sunsation and Wright Performance Powerboats models on display, Randy Sweers of FB Marine Group, which exhibited Statement Marine offerings, Randy Scism of Marine Technology, Inc., and Trond Schou of Nor-Tech Hi-Performance Boats that the Fort Lauderdale International Boat Show earlier this month was a sales success, I’m curious.

What are the organizers of that show doing right?

There is no single answer. Certainly, as the Fort Lauderdale event focuses on yachts, cruisers and sport fishing vessels it has the potential to bring in buyers who could afford a $300,000 to $750,000 performance center console or a $300,000 sport catamaran of the kind MTI and Performance Boat Center had on display.

“I’d rather reach 5,000 of the right people than 50,000 of the wrong ones,” Jeff Johnston of DCB Performance Boats told me a few years ago.

That rings particularly true in this discussion.

There’s also undeniable value in novelty. At the Miami show, high-performance center consoles and go-fast catamarans and V-bottoms of all makes and models line the docks. At the Fort Lauderdale event, they are much fewer and farther between. So they stand out.

But the most likely answer revolves around the center console wave that has swept through and continues to carry the performance boat market. Even the most performance-oriented center consoles have broad appeal. They are functional, versatile and stylish, and they’re not intimidating. For the real buyers attending the Fort Lauderdale show with the intent to place an order before they leave, they’re an attractive option.

“The only thing I like better about Miami is that you have the ability to do demos, which we didn’t with the Wright Performance Powerboats 360 in Fort Lauderdale, so you can get that out of the way,” said Manire.

Look, I’m not suggesting that the likes of Cigarette Racing Team, Outerlimits, Skater and so on abandon the Miami show in favor of Fort Lauderdale. I’m not advocating exodus of any kind. But to deny that the Fort Lauderdale show presents a viable opportunity for actual sales of performance-oriented center consoles—and even sport cats this year—in a way Miami does not would deny reality.