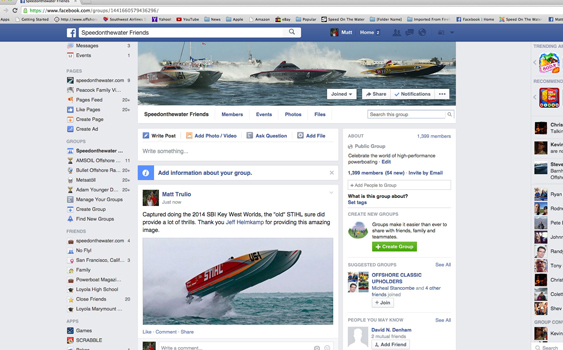 In 30 years as a journalist, editor and—now—publisher, I’ve learned a few things about copyright. But even the ones I think I know are best left to attorneys who specialize in that field. So I’m not going to talk about copyright law here, lest I find myself over my head in a sentence or two.

No, I’m going to talk about a couple of other “C” words: “common courtesy.” The recent dust-up between a couple of well-known powerboat photographers and the owner of a Facebook page about boats caught my attention. The page features photos, mostly of the amateur kind, of one boat after the next. Clearly, the people posting the pictures are into it. They’re having a lot of fun. All good.

And that’s where the trouble started.

I was not privy to the conversation between the Facebook page owner and the photographers. But I did speak to both photographers and they said they were essentially told to “pound sand” by the owner of the page. At least one of the shooters filed intellectual property infringement complaints with Facebook and—lo and behold—all the offending photos vanished.

So why even bother discussing this virtual tempest in a digital teapot? Because with just a few words including “May I?” and “Please” and “Thank you” it never has to happen again. For non-commercial use regarding their work, the words “Sure” and “No problem” and “You’re welcome” are the ones most likely to come out of the mouths of every photographer I work with, including the two in this case.

Now, the really, really pushy shooters who’ve spent thousands of dollars on equipment and thousands of miles on the road and thousands of hours learning their craft might ask you, “Would you mind adding a photo credit and a link to my website?” Yes, their sense of entitlement is so great that they’d actually like credit for their work and, remote as it may be, a shot at monetizing it by directing people to their websites.

Not to worry—you don’t have to dig out any legal boilerplate. Facebook, which boasts the most simple and intuitive content management system on the planet, makes it easy.

First, hit the “Add Photo” button near the top of the page on the left. See where it says Upload Photos/Video? Now chose your photo—hitting that button brings you to a window from which you can select a photo to upload. As the photo loads, you’ll get a message, “Say something about this photo.”

And that’s where you get to credit and thank the photographer who gave it to you. Don’t make yourself crazy—just go with something like “Here’s a hot photo from J. Doe.” Then hit post.

Added benefit? Captions and credits can add value to photographs. Plus, a couple of lines of text helps separate images stacked directly on top of one another—a huge no-no in graphics.

You don’t have to understand copyright law—hell, as I said, after 30 years in the business I certainly know just enough of it to keep myself out of trouble. All you have to do is ask—politely—and if someone says no, don’t let it bug you. It is, after all, his photography. Someone else will say yes. Like most things, it’s a combination of approach and follow-through.