You are at:Home»Thoughts»New School Approach 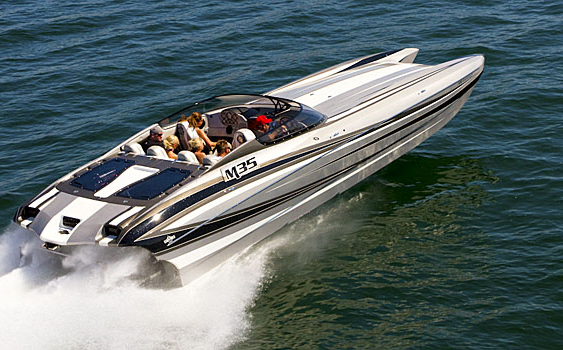 Despite that it seems like it happened a million years ago, working on the Powerboat magazine test team with expert drivers John Tomlinson and Bob Teague was a rare privilege and learning experience. Both are intelligent and articulate, world-championship-winning offshore racers who make their living in the high-performance marine industry businesses the own—Tomlinson at TNT Custom Marine on the East Coast and Teague at Teague Custom Marine out West. Both are talented as all get-out when it comes to driving a boat, and they respect one another.

Beyond that, as anyone familiar with these characters (and yes, they’re characters) will tell you all similarities end.

Still, when it came to testing boats Tomlinson and Teague did at least one thing exactly the same way. In every boat they tested, they saved top-speed runs for last. Their shared thinking was simple: The more seat time you spend in a given boat, the better you get to know it. It didn’t matter if the boat in question was one each of them had tested with various power packages a dozen times or more or a new model they had not seen—much less driven—before. Running for top speed was the last part of each test.

So if two guys with thousands of hours of seat time in some of the fastest go-fast boats in the world thought it was a good idea to get to know a boat—any boat—a bit before they pinned the throttles, why would anyone, even a driver who fancies himself experienced, not apply the same if not even a far greater level of caution?

That’s a good question to which I have no answer. Maybe it’s because most new go-fast boat owners are male, and men don’t like to be told how to do much of anything, especially when it comes to running machines. But the fact is, and I’ve checked around, few new go-fast boat buyers ask either the dealer or the manufacturer for much help learning to drive the boat.

“I might deliver an MTI or a Skater to a customer and I’ll take him out and show him the basics for an afternoon, but that’s usually about it,” says Tomlinson, who has delivered hundreds of boats to first-time and veteran buyers. “But as a rule, almost no one ever asks for ‘driving lessons’ in the way Tres Martin and Brad Schoenwald do it at the Tres Martin Performance Boat School. And to be honest, that’s really not something I’m set up for or want to offer. People have suggested I set up a driving school, and again it’s not something I want to offer, but my customers? They almost never ask.”

What I like about the new arrangement announced yesterday between Dave’s Custom Boats and the Tres Martin Performance Boat School is that DCB founder Dave Hemmingson and company aren’t waiting for DCB customers to ask. The El Cajon, Calif., builder of white-hot custom catamarans and V-bottoms is offering to enroll buyers of any new DCB model in the school. Buy a DCB and the company sends you to driving school.

Only a fool would turn that down, right? I agree. Unless you believe that there comes a time in life when you’re done learning and you know everything—again foolish—even a deeply experienced driver would get something out of it. And even if you learned nothing new or gained zero insight, what the heck? It didn’t cost you anything.

Cynics will argue that Dave’s Custom Boats is only offering the lessons because of the late-April accident at the Desert Storm Poker Run that involved a DCB catamaran. And to that I respond: Who cares? (As one of my favorite sayings goes, “No good deed shall go unpunished.”) Motivation doesn’t concern me when it comes to trying to do something that is good and maybe even a little bold. And this move by DCB is both.