You are at:Home»Thoughts»Story Planning Ahead 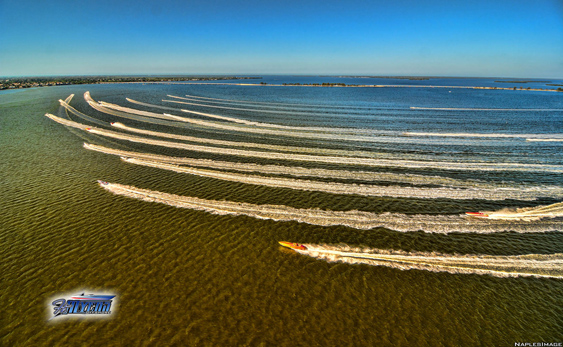 Offshoreonly.com writers Matt Trulio and Jason Johnson can’t be everywhere at once and they’re always looking for good stories—so reach out. (Photo by Jay Nichols.)

Despite that I wrote more than 600 articles in 2013, I can name my favorite in a heartbeat. Without question, “The Tale of White Lightning”, the story of performance-boat owner Travis Reed and his remarkable relationship with the late engine builder Brad Smith, tops my list on personal and professional levels. It was one of those stories where, as a writer, the best thing you can do is stay out of the way and tell it simply and honestly. It remains the only thing I’ve ever written that makes me tear up and smile at the same time.

But there’s a story behind that story. About a week after we ran an Image of the Week—featuring  a white Skater catamaran—called “White Lightning at Lake of the Ozarks” on speedonthewater.com, I got an email from Autumn Terry, a young woman who is a friend of Reed. Terry asked me if I wanted to write a story about the “real” White Lightning, Reed’s 41-foot V-bottom with Smith Power engines that spends most of its time running on Missouri’s Lake of the Ozarks.

Ms. Terry was so politely persistent—and soon after Reed, who was humble and charming, also reached out to me—that I had to say yes. Next thing I knew, I was interviewing, Reed and Smith during 2013 the Lake of the Ozarks Shootout in late August and looking forward to writing the story of one very cool boat.

A week later, Smith and Jeffrey Asbell died in a high-speed boating accident on Kentucky’s Lake Cumberland. Knowing Reed’s closeness to Smith, I decided to give him whatever space he needed and let the story go.

Several weeks later, Reed, still lost in grief and sorrow but wanting to talk, called me again. He needed to tell his story. And what started out as the story of a go-fast boat restoration and re-power project became something more.

Here is the moral to this tale behind a tale: If you have a story you’d like to see told, reach out. Between us, Jason Johnson and I write 104 articles a year for offshoreonly.com. That means we’re always looking for stories to tell. Both of us are reachable through this site and speedonthewater.com, and the truth is we welcome your story suggestions. We need your help. We’re good reporters, but no matter how connected we cannot be everywhere at once and are we are not—when it comes to what’s happening in your local go-fast boat world—as connected as you.

Can we write every story you suggest? No, and for any number of reasons that has to be our call. That’s something to know and accept before you contact us. But you’d be surprised how many stories we follow up on that do come from you, our readers. And you’ll never know unless you reach out.

That’s what Autumn Terry and Travis Reed did. They reached out. Like them, I wanted “The Tale of White Lightning” to be a cool little go-fast boat restoration and repower story. Simple as that, and then on to the next one. Like them, in hindsight I wish it had not become something more. But for reasons beyond all of our control, it did, and without their contact the story wouldn’t have been told.