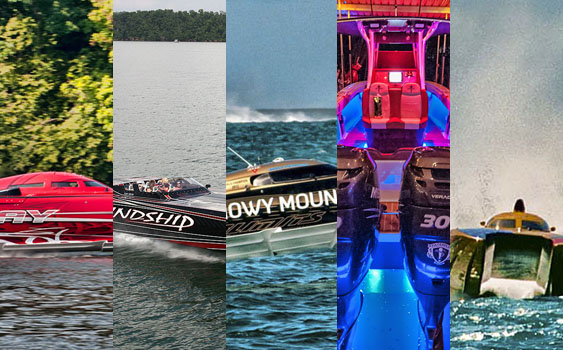 For good reasons and bad—exponentially more good than bad—2013 has been one of those years that won’t be hard to recall 10 or 20 years down the road. The performance boat business as a whole appears to be in a bit of a resurgence and there has been a remarkable amount of noteworthy achievements and boundary-pushing performances. Unfortunately, we also lost a handful of our boating friends.

Between this column and tomorrow’s by Matt Trulio, my wordsmith partner of www.speedonthewater.com, we’ve put together our top 10 stories from 2013. List-type stories like these can be a challenge, especially when you’ve produced a few hundred stories for a daily news website about the subject. On the flipside, because we’ve done our jobs all year, at least we have plenty of stories from which to make our choices.

So, as we present the top 10 stories from 2013, each one debatable no doubt, understand that there are plenty more that didn’t make the cut. In fact, just a few weeks ago, we posted a Year in Pictures slideshow highlighting 40 of the best images and stories from 2013. The full feature—available to download for free—ran in the November/December issue of Speed On The Water magazine.

Rather than ramble any further, let’s get it started with my top five stories of the year (not in order of importance). Trulio’s list will follow tomorrow.

Because I was there and had a chance to sit down with Bill Tomlinson shortly after his impressive accomplishment on Missouri’s Lake of the Ozarks in August, I can’t help but begin with the 2013 Top Gun winner. Blowing the previous Lake of the Ozarks Shootout record of 209 mph out of the water, Tomlinson and throttleman Ken Kehoe drove My Way, a turbine-powered 50-foot Mystic Powerboats catamaran, to a 224-mph top speed along the one-mile course.

The best part is that they believed the boat could do more—why else would they have gone back out after breaking the record by 15 mph. “If everything is just right,” Tomlinson said, “the boat is probably capable of running 240 mph.” 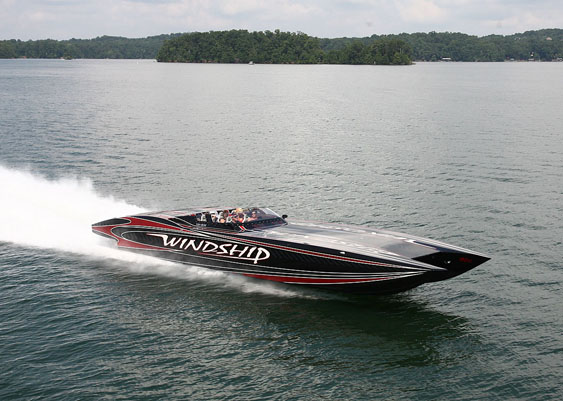 As far as positive impacts go, I don’t know if anything on this list can top this story. Behind the leadership of John Woodruff, the owner of the well-known 48-foot MTI catamaran Windship, the Lanier Partners of North Georgia board members delivered one of the largest and most beneficial poker runs ever. More than a quarter-million dollars was raised for three local charities at the fifth annual Pirates of Lanier Poker Run, which was held at the Lake Lanier Islands Resort in Buford, Ga., in mid-July. And with everything from tow boats and personal watercraft to cruisers and offshore catamarans, the event attracted more than 280 registered participants.

For Michael “Doc” Janssen and Brian Forehand, winning an offshore racing world championship is not a new experience. At the Super Boat International Key West Offshore World Championships in November, the teammates earned back-to-back world titles in the Superboat Vee class in Janssen’s 29-foot Outerlimits Powerboats V-bottom Snowy Mountain Brewery—no easy task for sure. But the more remarkable part was the way Janssen and Forehand brought home the 2013 championship—by sweeping all three races in Key West. The black and gold No. 14 boat dominated the six-boat class all week long, although the SunPrint team of Steve Miklos and Gary DeCuises gave Snowy Mountain a run for its money in a much older 29-foot Extreme model by finishing second in each race.

Another Year of the Center Console 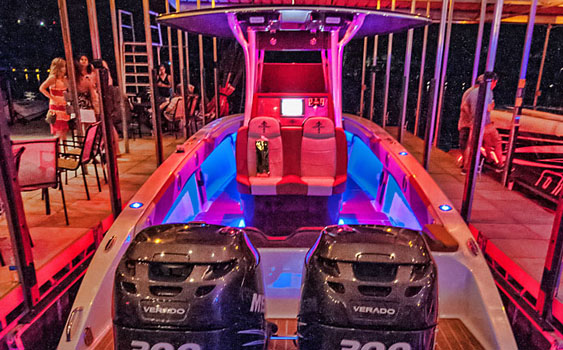 We touched on this story last year in our top 12 stories of 2012, but once again, the influx of performance center consoles into the market is jaw-dropping. Not only did MTI wrap up its highly anticipated 42-foot center console and deliver five of the stunning models in 2013, Sunsation Boats, which launched its 34-foot center console in February and is already in production with hull number nine, is tooling up a new 29-foot center console. Builders such as Cigarette Racing, Deep Impact, Midnight Express, Statement Marine and others can’t build the twin-, triple- and even quad- or five-engine models quick enough. Finally, take a company like Nor-Tech Hi-Performance Boats that has delivered its custom go-fast quality to the center console market and succeeded like no other. Since 2010 the company has produced more than 100 center consoles ranging from  29 feet to 50 feet. In fact, roughly 75 percent of the boats Nor-Tech builds today are center consoles. 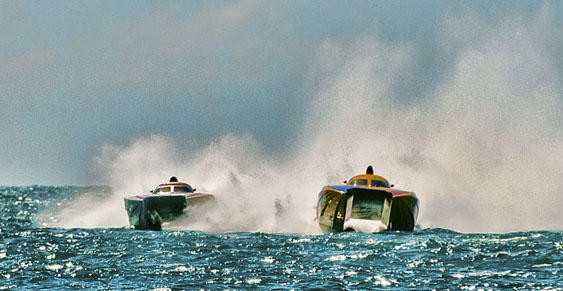 There was quite a bit of talk heading into the 2013 offshore racing season about the new Superboat class. Combining the former Super Cat, Superboat 750 and Superboat 850 groupings, the new class featured catamarans powered by twin 750-hp engines. Living up to the hype, the Superboat field became one of the most positive stories in the sport as eight boats made the trip to Key West to compete in the world championships in November. Although Team CRC wrecked in the first day of testing and Warpaint crashed in the second race, six boats lined up for the final day of racing and the results were dramatic as WHM Motorsports edged out Stihl to bring home the world championship. What’s even better is that the class is expecting a potential 10- or 12-boat field for the 2014 racing season with the addition of Cleveland Construction and other teams.