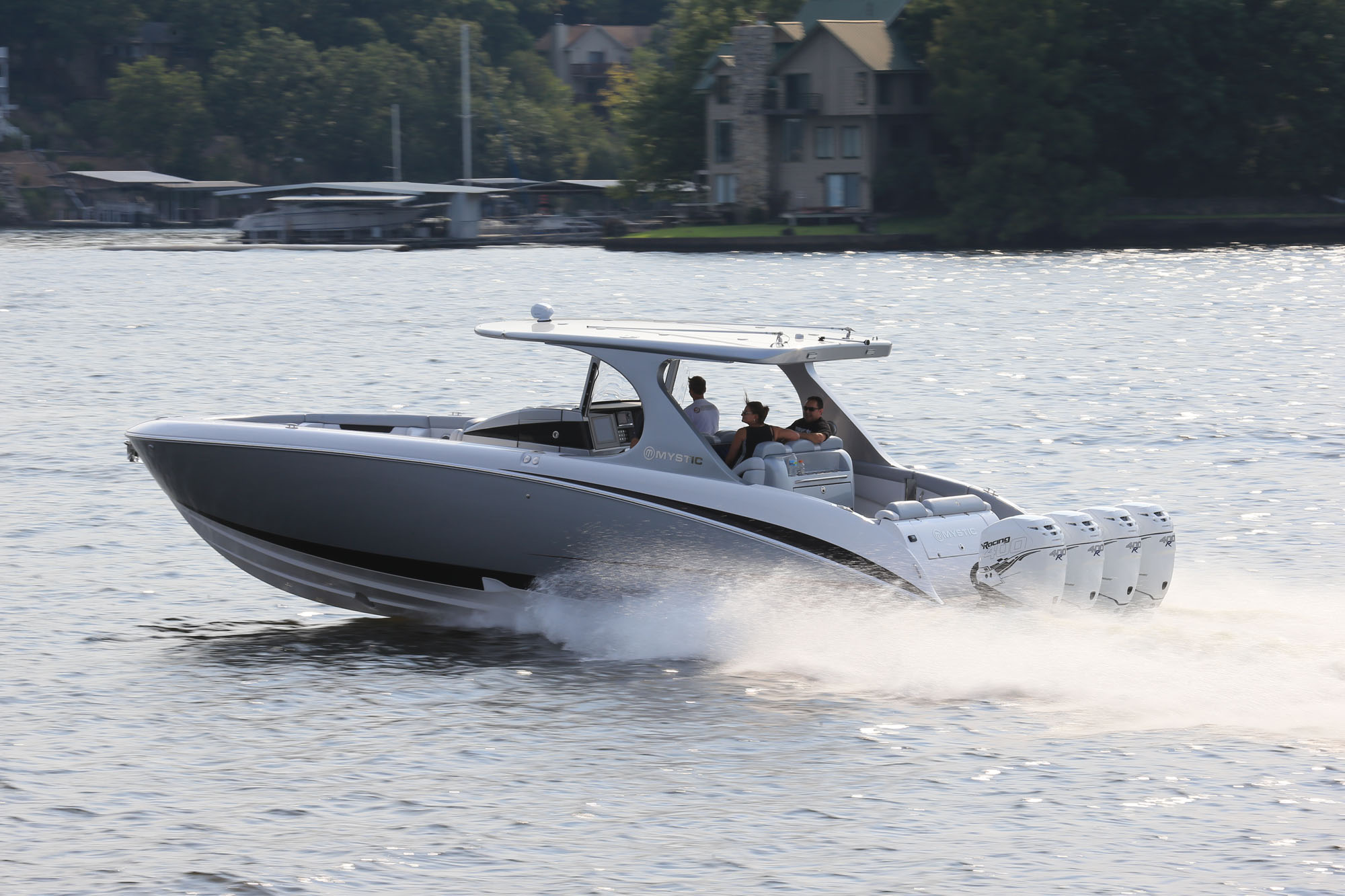 When I think about this year in high-performance powerboating, I go a little Spinal Tap, meaning that on a 1 to 10 scale, I give it an 11. First and foremost, there were no major incidents at any of the major events. Coming off a couple of years that saw our world lose not one but four high-profile marine industry figures in accidents on the water, that metric is particularly meaningful to me. I can’t explain why 2015 was a safe year in our world. I’m just grateful it was.

Second, the industry did well. Here’s how I know: Lack of posturing among competitive boat builders when asked how they fared. Allow me to explain.

In a down or mediocre year, when I ask Boat Builder Smith about his sales, he responds positively but invariably says he can’t understand how Boat Builder Jones is “still in business.” When I ask the same question of Boat Builder Jones, he knocks wood over his sales numbers but “worries” for either Boat Builders Smith or Adams. And on it goes—you get the picture.

That said, not all of my top stories from 2015—and offshoreonly.com columnist Jason Johnson will follow tomorrow with his picks—are feel-good stories about the industry. Some are still unfolding and some are bittersweet. Here they are.

The booming performance center console segment didn’t necessarily need a boost, but damn if it didn’t get one with the introduction of the Mercury Marine Verado 350 and Mercury Racing Verado 400R four-stroke outboard engines. With larger and larger center consoles leading the charge, the two new releases couldn’t have been better timed and found their way onto the transoms—in triple and quad configurations—on an array of models produced this year. And why not? They’re reliable. They’re quiet. They’re powerful. And they last. (Trust me, if they didn’t, Mercury and Mercury Racing would not offer them with such exceptional warranties.)

That Mystic Powerboats of DeLand, Fla., released two new models in the same year—in the process tripling its product line—with its M4200 center console and M4400 catamaran is in and of itself remarkable. But it would be a lot less so had those releases bombed. Nothing could be further from the truth. At this writing, M4200 hull No. 13 is in lamination and the fourth M4400 was delivered to a Florida buyer less than two weeks ago. In adding two new models this years, Mystic reinvented itself.

Under new ownership, Outerlimits has a future. (Photo by Pete Boden.)

That Joe Sgro, a longtime Outerlimits customer and friend of company founder Mike Fiore, bought the assets of the custom V-bottom and catamaran builder does not guarantee the company’s long-term success. We are talking about a go-fast powerboat company, after all, and if the recession of 2008 taught us anything it’s that big-ticket discretionary purchases are truly discretionary and the first things to go when times get rough, even for those who can still afford them. But with Sgro’s acquisition of the company—now called Outerlimits of Rhode Island—its future went from nonexistent to one with potential. 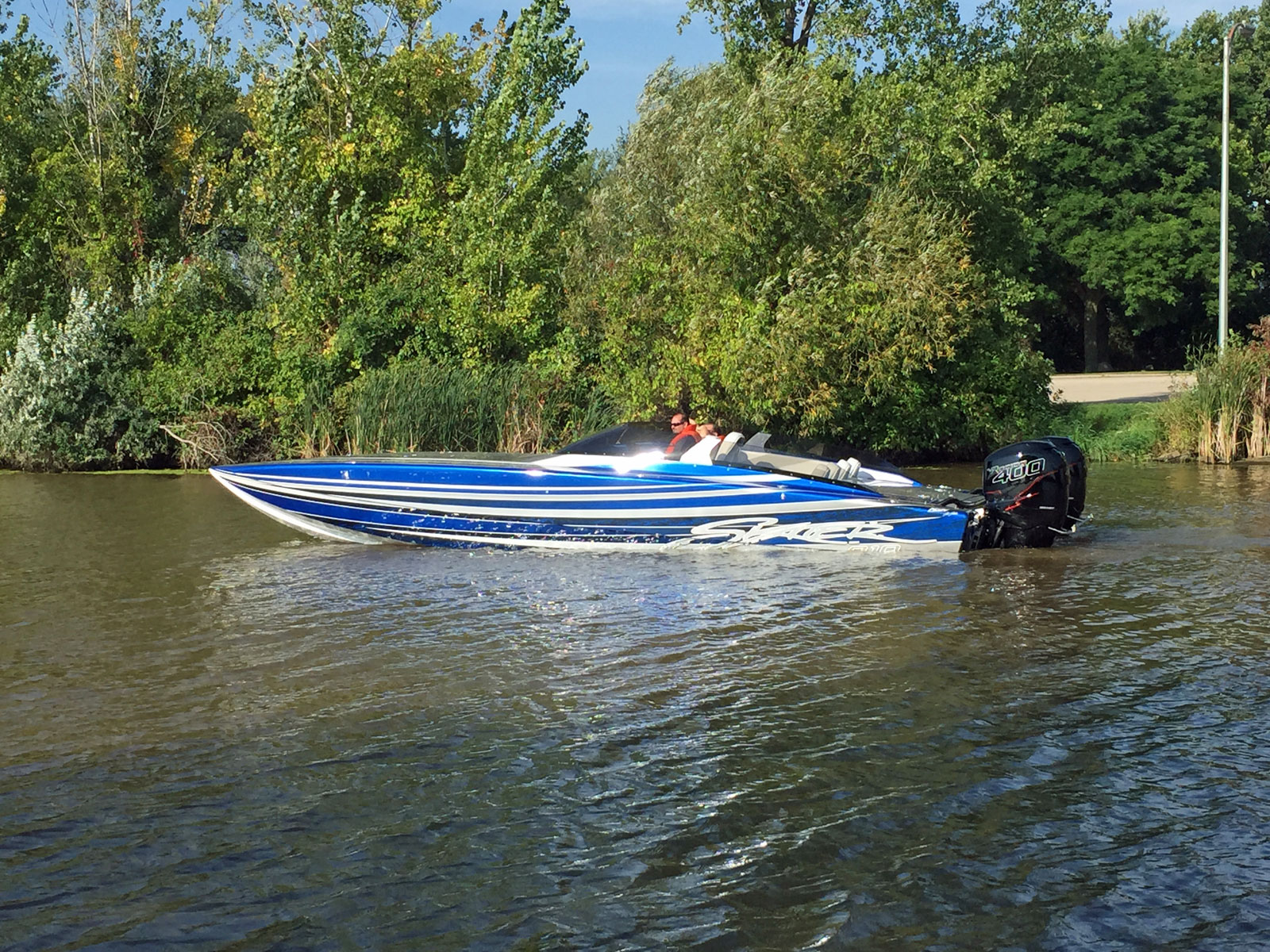 Skater’s outboard 318 catamaran could be the perfect package.

In some ways, the story of the new Skater 318 catamaran is an extension—so to speak—of the Verado outboard story. Put a pair of 400-hp beauties on the transom of the immaculate 31-footer and what do you get? A sport catamaran able to run 100 mph all day long, for season after season, on reliable four-stroke outboard power. (That it has topped out at 114 mph so far is gravy.) You can certainly buy a new Skater that is faster, larger and more exotic than the 318 and company principal Peter Hledin will be happy to take your order. But you won’t find one that delivers more hours of uninterrupted high-performance boating fun that a Skater 318 with twin Verado 400s.

One year after winning a world championship, Broadco departed the sport. (Photo by Pete Boden.)

Finishing the 2014 season with a Superboat-class world championship, the Broadco Cat 5 Offshore Racing team headed into the 2015 Super Boat International season with high hopes that were dashed when its MTI catamaran rolled in the season-opener. The boat was rebuilt and rigged just in time for the SBI Worlds in Key West, Fla., in November, but another world title wasn’t in the cards for the well-regarded team. To the disappointment of offshore racing fans everywhere, team owner/driver Chuck Broaddus announced his retirement from the sport shortly after Key West.