You are at:Home»Uncategorized»Byrds Swoop Up New M35 Widebody 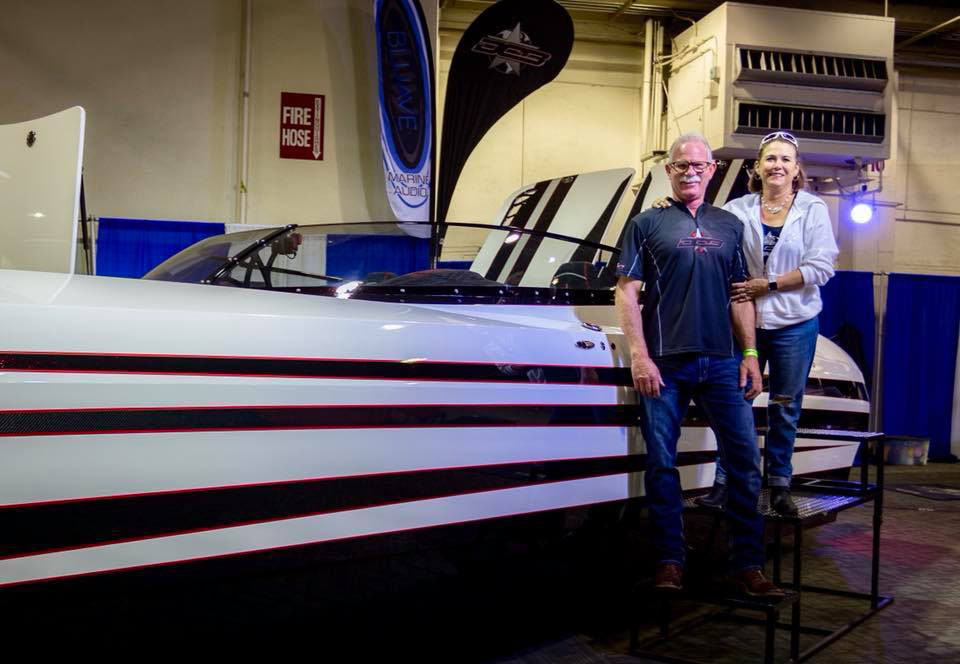 A proud Jimmy and Pamela Byrd stand next to their new M35 Widebody from DCB Performance Boats.

Arizona couple Jimmy and Pamela Byrd didn’t waste any time deciding which DCB Performance Boats model they wanted when it came time to build their first new boat from the El Cajon, Calif., company. The longtime boaters from Wickenburg, Ariz., who boat most often on the Colorado River-fed Lake Powell and Lake Havasu, opted for the M35 Widebody powered by the turbocharged Mercury Racing 1350 engines.

And, after seeing the 35-foot catamaran for the first time at last weekend’s Los Angeles Boat Show in Pomona, Calif., the Byrds are ecstatic about the new ride—their fourth DCB in less than two years.

“Building a new boat with the team at DCB is an experience that everyone should get to have—from start to finish the process was incredible and pleasant,” said Jimmy Byrd, who picked up an F32 powered by twin Ilmor Marine 625 engines in June 2016, then traded up to the larger, wraparound-around windshield model—an M35 with Mercury Racing 1100s—a few months later before jumping into the company’s third 41-foot cat, the silver and white M41 with a couple of 1350-hp Mercury engines, not long after that. “The constant back and forth with all of the folks at DCB was such a fun experience. They were great at sending pictures throughout the process, but seeing the boat for the first time in person since it was pulled from the mold at the boat show was amazing. The wow factor of seeing it finished was kind of mind-blowing.” 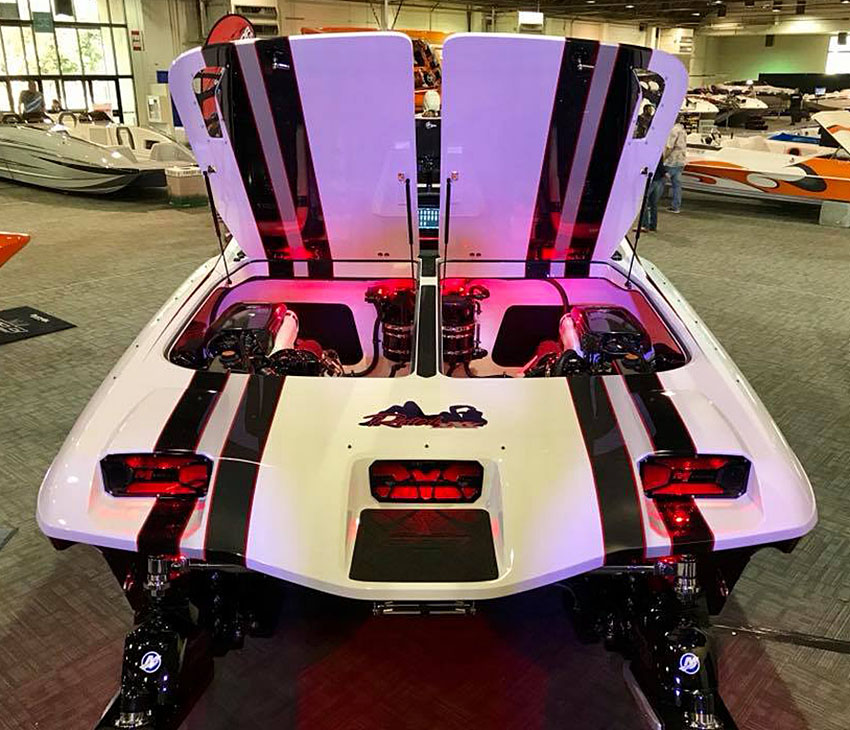 “DCB delivered exactly what I wanted—a sexy, sleek, over-the-top boat with a luxurious, instrument-free cockpit,” Byrd said, adding that he was equally impressed with the custom Adrenaline Trailer the boat sits on. “We wanted a lighter boat so we ordered it with a partial carbon layup and decided to expose some of the carbon throughout. We also didn’t want any external gauges or switches so all of that is integrated into the computers. Eric (Winebarger) went to work on that and made it all happen. 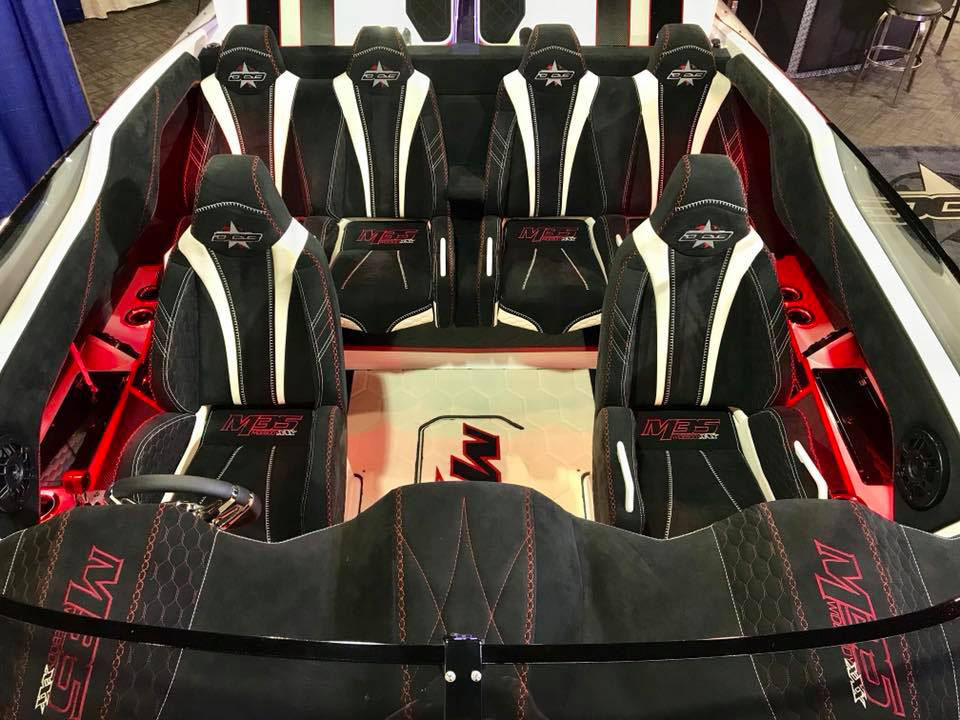 The interior of the 35-foot catamaran was as impressive as any DCB cockpit to date.

“We loved the M41 and the 1350s but it was a little too big of a boat for us in terms of towing, maneuvering and cleaning so we decided to go with the M35 with the same power,” he continued. “We also decided it was time to stop buying someone else’s boat and build our dreamboat. I think we got it. The 1350s are where it’s at in this boat. I can’t wait to drive it.”

According to Paul Miller, DCB’s co-owner and general manager, the team is coordinating an on-water delivery day with the Byrds in the next couple of weeks. 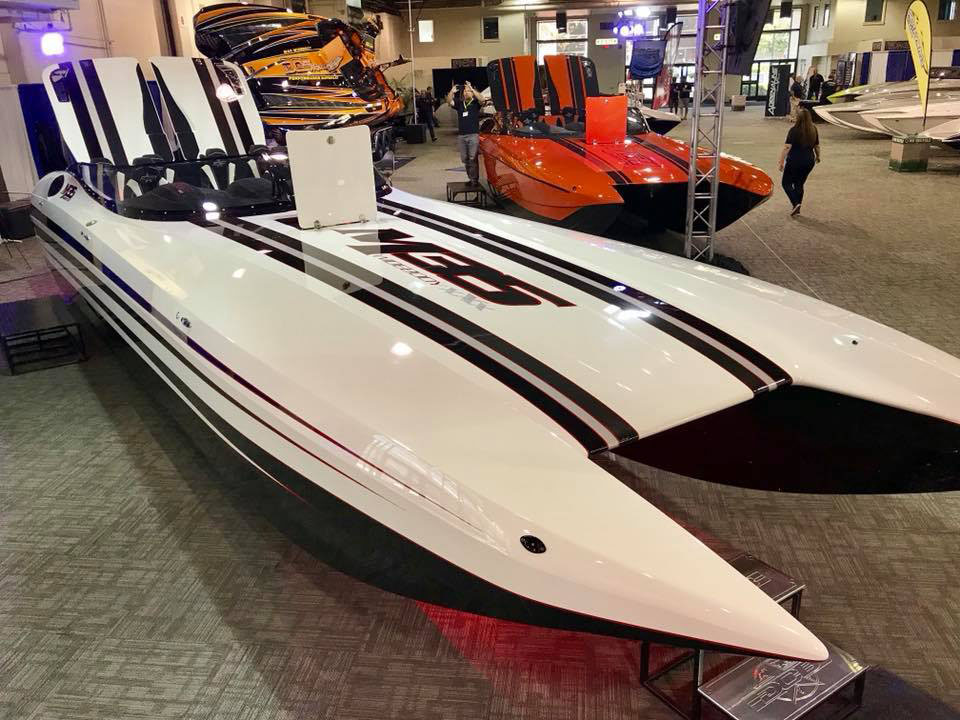 The Byrd’s M35 Widebody was on display with two other stunning DCB models at last weekend’s Los Angeles Boat Show.

“Jimmy and Pam’s boat is the second-lightest M35 we’ve built (Cat’s Ass owned by Carlton Bass of Oklahoma is the lightest 35-footer), and it’s one of the prettiest we’ve done. The boat is still built with our vinylester, vacuum-bagged infusion process, it’s just a hybrid with a carbon and Kevlar layup to make it lighter. They wanted the boat with larger fuel tanks so we tried to save some weight in other areas. The boat also has some new silver pearls we haven’t used before. The heavy pearl really stands out for the XXX part in the deck. The exposed carbon in the M35 logo on the deck is different, too. All of that was done in the gelcoat.”

Miller was pretty proud of the M35, which he said is equipped with a large 12-inch Garmin display in the center of the dash and twin Simrad monitors for the driver and co-pilot on each side of that as well as a Simrad display with Mercury’s VesselView system in the gunwale cutout next to the throttles and two in the headrests for the four passengers in the finely crafted rear bucket seats, but he is even more proud of the fact that DCB is delivering another boat to another satisfied customer.

“Doing this build with the Byrds was a lot of fun—they were great customers to deal with,” Miller concluded. “I expect them to use the boat a lot this year. They’re going to have so much fun with it.”