You are at:Home»What?!?»When Is Loud Too Loud? 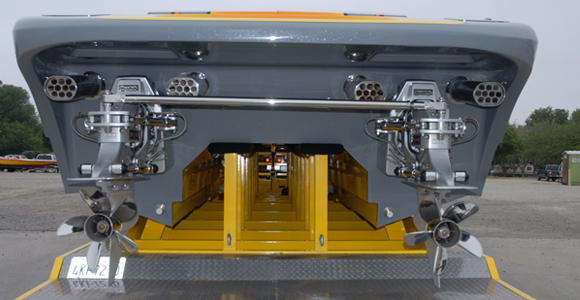 Built-in muffler exhaust tips are sometimes necessary for the noise levels to be legal.

It’s inevitable, with horsepower comes noise. That’s the dilemma performance boaters struggle with on a daily basis. And not everybody appreciates the deep-throated sounds of a rumbling V-8 in the same way. Ever notice what happens at a quiet marina when a much-muscled poker-run style boat starts its engines? That’s right, everyone turns and looks but not everyone has the same expression etched on their face.  Some are ‘thumbs-up,’ but others shoot daggers while muttering nautical curse words under their breath. And not surprisingly in this often over-regulated world of ours, excessive noise has become a big issue, and big issues usually lead to laws.

If you’ve been on the unfortunate receiving end of an excessive boat noise violation at your local lake or marina, you know first-hand it’s both exasperating and expensive. But knowing the law, and what’s “too loud” isn’t always as simple as you might think. First, not all law enforcement agencies patrolling our many waterways are playing by the same rules. How come? Well, it depends on the jurisdiction of the agency, local, state or federal. Most states – about 75 percent – have a law on their books specifying the maximum level (in decibels) of exhaust noise allowed by recreational power boats. However, these laws and standards vary from state to state. Then, you have this thing called the “Model Noise Act” which was adopted as the national noise standard by the National Association of State Boating Law Administrators in 2005. This is the standard that federal law enforcement water patrols go by to determine if you’re too loud or not.

If you’re engaged by a water patrol officer concerned about the noise level of your boat, in the majority of cases, it’s the “Model Noise Act” standard that’s going to be applied primarily because it’s the easiest of all tests for the officer to administer. What the officer is going to do (this can be done at the dock, or while sitting still/drifting out on the water) is simply ask you to start your engine in neutral and let it idle at its lowest rpm level (if you have more than one engine, you’ll be asked to have them all idling simultaneously). The officer will then use a decibel meter to take a sound reading. The law says the decibel meter must be set on the “A” scale. The most critical element of the test is the placement of the decibel meter for an accurate reading. The law says the decibel meter shall not be placed any closer than one-meter (approximately 39 inches) behind the transom of the boat, and between one and 1.5 meters (approximately 39 to 58 inches) above the surface of the water. This is called the J-2005 test and the maximum allowable decibel reading is 88 dBA. If your engine(s) was manufactured prior to 2005, your maximum level is 90 dBA. 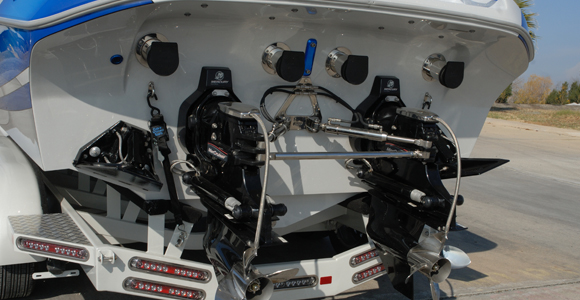 One additional word of advice, if you are tested, be aware that the ambient noise level (without your engine running) does have an effect on the outcome of the test. Factors like wind, topography, waves slapping, other boats passing by and even normal conversation between people might adversely change the outcome (normal ambient is in the low 60 dBA range) so make sure you’re not being held accountable for someone else’s noise.

If you happen to be unlucky enough to be checked from the shoreline by an officer, a different test and standard applies (J-1970). This law simply says that no boat shall create a decibel level in excess of 75 dBA at the shoreline regardless of boat speed or distance from the water’s edge. If you want to avoid this potential pitfall, just remember to keep your no-wake speed at a minimum and refrain from full-throttle acceleration when close to shore.

As a general rule of thumb, if you have underwater (through the prop hub) exhaust, you have nothing to worry about.  You’re plenty quiet.  However, if your boat is equipped with thru-transom above water exhaust, that’s a different story. Except in a few rare cases, even a mild big block V-8 engine (naturally aspirated) will require some type of muffling device in addition to wet exhaust in order to achieve the mandated 88 dBA level at idle. Usually it necessitates either a ‘built-in’ or a ‘clamp-on’ aftermarket muffler attached to the tailpipe or the exhaust tip to be legal. Prices for a pair of mufflers commonly range from $500 up to $1,500 depending on the brand. Many performance boaters, however, are reluctant to add mufflers since they believe that mufflers create exhaust back pressure which potentially robs horsepower. It’s your choice, but the possibility of losing a mile an hour or two on the top end compared to avoiding an unpleasant experience and a costly citation seems like a no-brainer. Boat noise laws aren’t going anywhere soon. Either take some of the bite out of the big dog, or be prepared to pay the price.

___________________________________________
Bob Brown has been  a performance boating journalist and photographer for 39 years. He is the former executive editor of Powerboat Magazine and senior contributing editor for Hot Boat Magazine. He’s test driven and reported on more than 2000 different boats and is a former offshore, drag, marathon, and water ski race driver. Currently, he’s the president and founder of Media Direction, a full service advertising and public relations company specializing in the recreational boating industry.