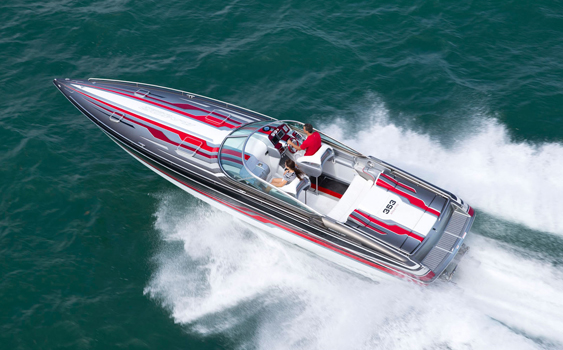 It’s all about performance and power. So, leave it to a pair of industry legends—Formula Boats and Ilmor Marine—to create a unique platform like the 353 FASTech and MV8-570 engine to launch a dynamic course in today’s high performance arena.

After much time at the drawing board, Ilmor introduced its lightweight, compact and fuel efficient MV8-570 back in February 2013 at the Miami Boat Show. “This project [new engine]has been about two years in the making. It’s a derivation of an engine built for the ski-boat market,” Ilmor President Paul Ray said. “The engine is built very strong, with tremendous bottom-end torque.”

It’s offered in an entry-level version for cost conscious buyers and an upgraded package (the 570X) with sport-tube headers, billet pulleys and custom engine covers in a selection of blazing colors including green, orange, blue, red and platinum.

The then-and-now phase involved additional Ilmor tweaking, gaining emission credentials and drive package offerings by Teague Custom Marine and IMCO Marine, as Formula became the hull of choice for this all-out performance package that pairs the 353 FASTech with twin Ilmor naturally aspirated 570 hp engines into a high-powered machine. Jessica Gammara, Ilmor Director of Sales and Marketing, explains that “Ilmor has always been known for pushing the envelope. The 570 delivers great diversity for the market with new boats or re-builds.”

These racing dynasties, whose credentials have garnered over-the-top scores in high performance arenas, delivered a winning combination for pleasure and performance enthusiasts: Formula holds a legendary status on the offshore racing circuits dating back to the early 1960s and boasts the FASTech model as a multi-titled contender in the APBA Factory Class lineup during the early 2000s, while Ilmor has captured an impressive 17 Indianapolis 500 race wins with its motorsports race engine design and several World Champion titles in offshore racing. 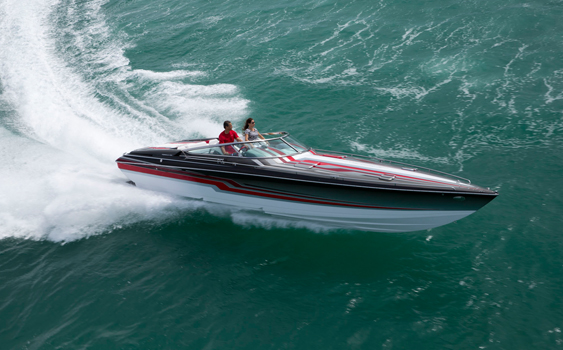 Although the Platinum Series Imron “Stiletto” dressed FASTech boasts an impressive list of amenities, Formula’s designer-extraordinaire John Adams incorporated some different style elements on board this new 353. “There’s the multi-level sunpad on the engine hatch, which steps up in elevation so slightly,” said Formula President Scott Porter. “And the graphics down the gunnel, deck and down the sides, are a dramatic departure from the typical fades.”

Since the show, the FASTech has been in Miami for photo shoots and additional testing. “We are still doing some tweaking on the propeller/X-dimension end to give us a little more on top end, but overall performance reports have been outstanding,” Formula Marketing Manager Scott Smith explained.

And Paul Ray reports from Ilmor’s side of the dock, “The boat ran flawlessly…we are thrilled with it.”

The 353 is soon scheduled to head north to Formula’s Decatur, Ind., facility where Scott Porter says “we’ll do the final dial in up here. With a seven to eight week build time, we hope to offer this package to our customers to enjoy later this summer.”

While the two companies have successfully partnered with installations of Ilmor’s high-performance MV10 and INDY drive systems in both Formula’s 382 FASTech and 400 Super Sport hulls, the innovative 353 FASTech/MV8-570 combination unveiled last month in Miami re-ignites the performance market as the industry makes a move forward. “We hold the belief that we have to build the market back from the bottom up…we must grow from the entry level and upwards,” Ray explained. “The 570 is targeted at the customer who wants to get in [the high performance market]at the entry level. We made it a small block deliberately. We wanted to bring something new to the market. It’s a modern twist on the old days.”

Formula and Ilmor plan to introduce their performance package to the West Coast crowd at Desert Storm (April 24-25). Other calendar dates call for a presence at Lake of the Ozarks (June 6-9) and the Boyne Thunder Poker Run (July 12-13).