You are at:Home»BUI»Drinking and Boating… Can’t We All Be Adult? 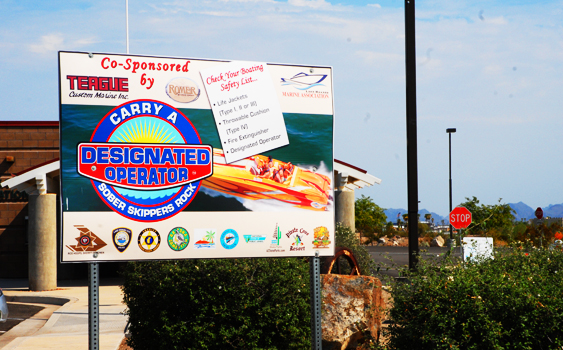 Tragic on-water accidents ruin the lives of hundreds of boaters every year. Even more tragic is the fact that many of these accidents and fatalities were preventable had the boat operator chosen not to consume alcoholic beverages.

According to U.S. Coast Guard statistics, 19% of all boating accidents resulting in a fatality are caused by operator intoxication. In 2009 the National Association of State Boating Law Administrators, in partnership with the Coast Guard, launched “Operation Dry Water,” a 50-state campaign focused on detection and enforcement to remove intoxicated boat operators from the water.

Although the idea of sobriety checkpoints is not popular with boaters, the number of alcohol-related boating deaths has started to decrease since then. In an attempt to escalate that encouraging trend, the Lake Havasu Marine Association (LHMA) took it upon themselves to fight the problem on their own terms.

“We appreciate and support everything that local, state, and federal law enforcement agencies are doing to curb intoxicated boat operators on Lake Havasu but we thought we could do more,” commented Jim Salscheider, LHMA president and CEO. “In 2011 we formulated a plan to initiate ‘Designated Operator,’ an awareness campaign asking boaters to voluntarily assign at least one individual onboard to be the sober boat operator for the day.  No interdiction, no citations, no hassle, just be responsible enough to have a sober person at the helm.”

No matter how well intentioned safety campaigns need money for effective public outreach. “We were realistic about Designated Operator from the start,” continued Salscheider. “If it was going to launch, it needed to be a grass-roots, privately funded effort. Fortunately, two of our most dedicated supporters, Teague Custom Marine and Romer Beverage Company, didn’t hesitate to answer the call. Both understand the importance of making our waterways safer for all boaters.”

Now in its second year, Designated Operator is making a positive difference according various law enforcement agencies that patrol Lake Havasu. “The word about using a Designated Operator is spreading,” said Salscheider. “Field officers report encountering an increasing number of boaters who embrace the campaign and are willing to refrain from alcohol consumption when they are going to drive. The fewer intoxicated boat operators we have on our waterways makes it just that much safer for everyone.”

The Designated Operator campaign has used several effective techniques to broadcast the message.  Billboards have been installed at all major launch ramps in the area to remind boat operators to remain sober.  Launch ramps and boat rental companies are also distributing helpful Designated Operator boater information cards reinforcing the message.  Maybe most unique is the use of free elastic wrist bands given out to boaters who agree to abide by the Designated Operator philosophy. These wrist bands are honored at popular local waterfront restaurants and taverns for free non-alcoholic beverages to the wearer.

In the end, it’s all about making boating safer and saving lives.  If you can do that without issuing tickets and making arrests, so much the better.

___________________________________________
Bob Brown has been  a performance boating journalist and photographer for 39 years. He is the former executive editor of Powerboat Magazine and senior contributing editor for Hot Boat Magazine. He’s test driven and reported on more than 2000 different boats and is a former offshore, drag, marathon, and water ski race driver. Currently, he’s the president and founder of Media Direction, a full service advertising and public relations company specializing in the recreational boating industry.