You are at:Home»Industry»Mercury Racing: What’s Moving 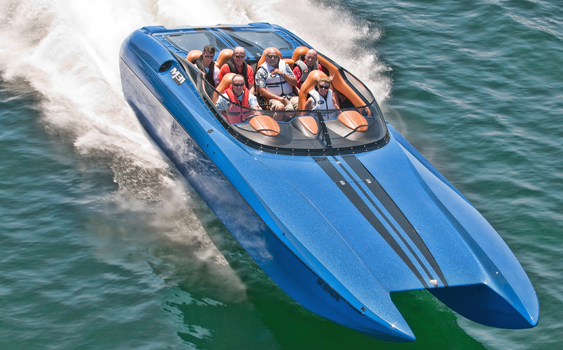 Mercury Racing does not divulge per-unit sales figures. That means, for example, if you ask Fred Kiekhaefer, the president of the Fond Du Lac, Wis., company how many 1350 engines the company has sold since the model was introduced two years ago, he’ll simply look at you, smile and say, “We don’t discuss those things. Next question, please.”

However, it is safe to say—very safe—that the team at Mercury Racing has been delighted with the reception of the 1350, as well as that of the 1100, and is still expecting to be delighted with the reception of the 565. Introduced just seven months ago at the Miami International Boat Show, the 565, which has 40 more horsepower than the 525EFI and digital throttle and shift, hasn’t taken off right out-of-the-gate in the same way as the quad-overhead-cam, turbocharged 1350.

But then, as Kiekhaefer explains, you’re looking at two very different ends of the high-performance boat-and-engine-buying public.

“I am still seeing a pretty soft marketplace,” says Kiekhaefer. “The people who have put in the 565 engines absolutely love them, but we haven’t moved the number of those engines I would have hoped. There is still a lot of concern out there about the economy.”

Kiekhaefer continues, “At the end of the market where the quad overhead cam engines (1350 and 1100) fit, the customers are very well established. At the entry-level of the performance boat marketplace, people are still to some degree holding off to see what happens with the economy.” 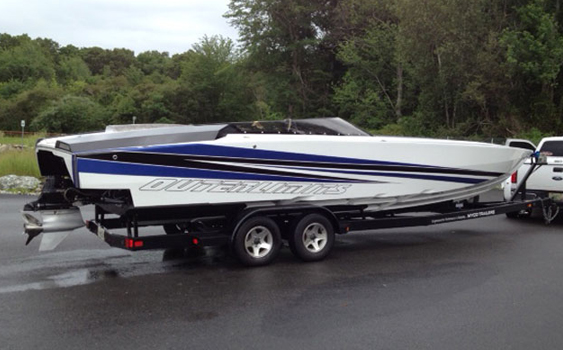 In the field, the 565 has earned raves. A 565 engine—the first one to be installed west of the Mississippi—powered Nordic’s new 24-foot sport catarmaran to a top speed of more than 100 mph. Equally, if not more impressive, a 565 in an Outerlimits SV29 V-bottom—the first 565 installation for the builder—powered the 29-footer to 98 mph. By all accounts, customer and boat builder, the drivability of the boats with the engine is outstanding.

“For new boats, the 565 makes perfect sense if the customer and boat builder are aware it’s out there,” says Kiekhaefer. “There are some real advantages to the 565 beyond the 40 more horsepower it has than the 525EFI. People who experience the digital throttle and shift for the first time just love it. It’s one of those things, going from a mechanical transmission to DTS, that you just don’t understand until you try it. The first time I experienced it was with 1350 engine prototypes. I was totally blown away, and I’m kind of difficult to impress.”

Contrary to a popular misconception, Mercury Racing is not replacing the 525EFI with the 565. The company plans to keep the 525-hp engine, one of the best-selling engines in its history, in the line. 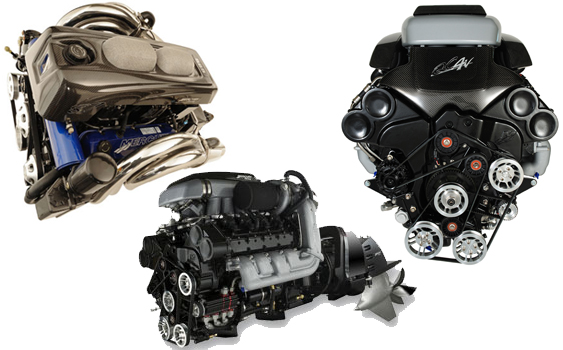 As for the 1350, it remains the flagship of the Mercury Racing line. According to Kiekhaefer, the introduction and acceptance of the 1350 has been even more successful than that of the since-discontinued 1075SCi, which was the world-beating go-fast boat engine of its day.

“With the 1075, we did the best job we could with the tools we had at the time, and in all humility I can say that engine had better drivability and durability than anything in its class. But the 1350 is a quantum leap forward technologically. The base technology is so much better.”

Kiekhaefer continues, “Although the lion’s share of that category has gone to the 1350, the 1100 has done very well. People who have them love them. And people who choose the 1100s tend to go with them for three reasons: they can’t get the 91-octane fuel required for the 1350, they’re perfectly happy going 140 mph rather than 175 mph or 180 mph and, of course, the lower price point. But for sure the 1350 has been the more popular of the two.”