You are at:Home»LOTO»Innovative Sunsation Thrives In LOTO Spotlight 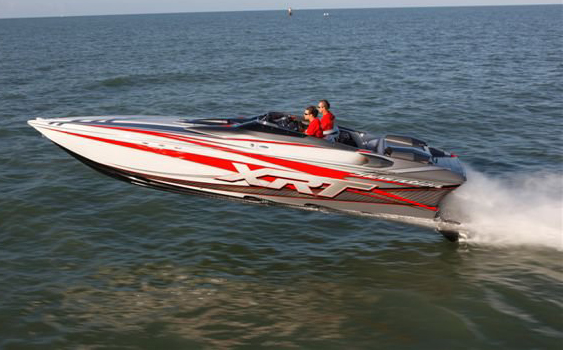 As Sunsation Performance Offshore Powerboats gears up for this weekend’s Lake Of The Ozarks shootout, company co-owner Joe Schaldenbrand watches a bevy of newly-minted thoroughbred vee-bottom machines idle into place along the eight docks he’s  reserved at the event’s epicenter, Captain Ron’s.

“Wayne [Schaldenbrand’s brother and Sunsation co-owner] and I got here one way, and one way only,” he says, plainly savoring life on recreational powerboating’s grandest stage.  “We just build the best boat we can possibly build in every way, and spend twenty four hours a day making it better. We eat, sleep, work, and play Sunsation, and when we’re not, we’re thinking about it.”

In 2007 Michigan-based Sunsation released its spectacular 43’ F-4, their most aggressively styled and advanced tooling effort to date. Pricing begins in the $600K range. There will be at least one F-4 prowling the Ozarks this weekend.

Sunsation is in the throes of  finishing their first center console, a 34’, which incorporates a proven bottom with cabin tooling and styling that may prompt the performance fisherman to rethink the entire breed. The convertible lounge berth has 7.5 feet of head room, and overall cabin length is 13 feet. An array of outboard configurations are available.

“Our only hope at succeeding in these times was not to pull back, but to be more aggressive than ever and invest more in tooling and technology, not less,” Schaldenbrand said. “We’ve certainly done that.”

The efforts were rewarded last week with an order for three boats from Dubois Marine, Canada’s leading Sunsation dealer—the second such order in as many years. “It’s gratifying to know we’ve become an international company,” said Schaldenbrand.

Sunsation took unlikely root as a major performance player in a twenty-by-twenty garage in tiny Algonac (population 4,110), along the St. Clair River, where the Schaldenbrand brothers embraced boating as a way of life. Their first commercial effort was a 16-foot river runabout, and the family learning curve was accelerated through a ready repair service for any and all boating ills.

Wayne built his first boat at age seven, using plastic bottles collected from a local laundry for floatation on a wood platform.

Sunsation is the second best-known boat manufacturer in town: Chris-Craft took root here in 1910, and Wayne inherited the passion and learned some of what he knows from his grandfather, who worked there in fiberglass.

Sunsation embraces innovation at every turn, and used input from a Naval architect in incorporating ring frame bulkheads into the center console’s lamination schedule to achieve targeted strength and weight.

Expect this “fish boat” to look like no other: Wayne designed a truncheon system mold to rotate 360 degrees by a single operator using a single level—allowing a gel-coat painter full and unparalleled access to the entire surface of the boat and expanding creative possibilities. 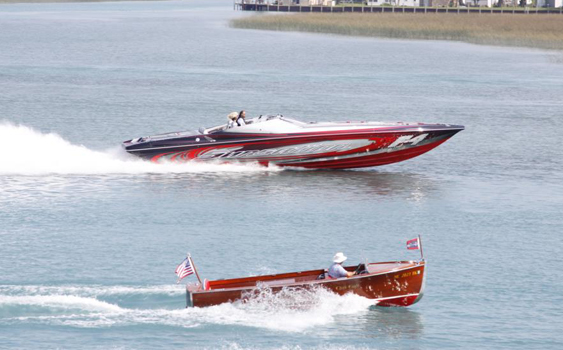 At least one Sunsation F4 43-footer will be on display this weekend at the Lake of the Ozarks shootout. (Photo courtesy of Sunsation.)

Sunsation embraces the flexibility inherent in a small family business. When a repeat client asked that his new 36’ Dominator interior feature  four bolsters without eliminating the rear bench, Sunsation found three additional feet of length in the cockpit, swapped the staggered engine configuration with side-by-side, and created tooling specific to the conversion.

Sunsation’s 28-foot vee debuted in the mid-1980s to strong reviews, as the brothers accelerated their attention on the two areas most important to them as boaters: safe speed and a dazzling cabin. Both are Sunsation benchmarks.

Two contributors vital to Sunsation’s  branding, McLeod Interiors and Mitcher T Graphics, have endured from Sunsation’s beginning and have settled into its DNA. Their work will be recommended options on the center console. Both share Sunsation’s distinction: Michigan companies that have achieved stardom in their respective ranks.

Check out the forums section of Sunsation’s site, and look for the ‘Just Left The Factory’ link. You’ll see detailed photos of dozens of Sunsations in every color and configuration—one of the best nuggets we’ve found in any performance boat builder’s website.